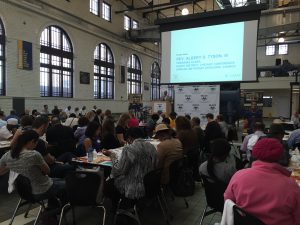 About 300 North Lawndale residents and stakeholders gathered to share ideas for a plan to rejuvenate the neighborhood April 16. (Photo by Jean Lotus/for Chronicle Media)

About 300 people gathered in the cavernous auditorium of DRW College Prep High School in North Lawndale to share ideas to improve the neighborhood and help build a strategic plan April 16.

“Do you feel historic?” asked Dennis Deer of the North Lawndale Community Coordinating Council (NLCCC). “Because you all made history today.”

The NLCCC is a collective of North Lawndale neighborhood organizations. NLCCC received a grant to have the help of the Chicago Metropolitan Agency for Planning (CMAP) to craft a plan for the area.

Organizers hope the plan can set a path toward economic development and renewal for the dilapidated West-Side Chicago neighborhood. The school is located in the 900 block of South Homan Avenue.

The crowd was seated in small stakeholder focus groups who used handheld electronic response devices to vote for projects and ideas.

Neighborhood residents said they loved the public library, the Homan Square YMCA, Douglas Park and the Greystone-lined boulevards and the historic K-Town neighborhood, as well as their church communities, they told the CMAP planners.

But they identified as challenges urban blight, lack of jobs and and safety.

Participants took turns in a conversation, sharing their opinions about problems in the neighborhood.

“I think the mayor should get off his Napoleon complex,” said a resident who identified herself as Rambling Rose. “We need martial law and the National Guard in here in hotspot areas.”

“I respect your opinion, but I disagree,” said Linda Witherspoon of the Roll Call Reentry Services organization. “If they’re under arrest, we’re all under arrest.”

“The buildings are so ornate. They have deteriorated because there are so many tenants and so few homeowners,” she said. The group agreed that landlords should be held accountable for the condition of buildings. They wanted to hear more about proposed programs allowing residents to buy empty lots at discounted prices.

The neighborhood schools needed to bring back vocational programs in school, Steward said. Other residents said there were not enough entertainment options, grocery stores or resident-run businesses.

“You can drive 10 minutes east of here and it’s a totally different world,” said one participant.

Retired CPS Principal Betty Green and other teachers and health workers in the group agreed that there were not enough resources to handle the deep emotional needs of residents who had suffered childhood trauma.

“Some kids have watched their friends get killed,” said Witherspoon. “There’s a lot of unresolved grief.”

Mount Sinai Hospital in the neighborhood could do more to treat chronic health conditions such as asthma and diabetes, some participants said.

The North Lawndale neighborhood covers 3.21 square miles on the West Side of Chicago, according to city census data. The neighborhood of about 35,000 residents has high rates of poverty and 18 percent unemployment. Per capita income per year is around $12,000 and around 30 percent of residents have no high school diploma.

“The information will help the consultants at CMAP get a sense for what the community’s priorities are,” said Leonard. CMAP will be distributing a door-to-door survey in the next month, she said.

CMAP says they use the resident surveys to suggest zoning and planning changes that will direct development that is guided by the priorities of the residents.

Already the School of the Art Institute of Chicago is repurposing the old Nichols Tower in the 900 block of South Homan Avenue to create an arts and culture space with job training and urban farming.

“Were looking for innovative solutions so we don’t look at things the same was as before,” Leonard told the group. “We do a lot of talking in North Lawndale, and the City of Chicago is the Windy City, but we want to stop the talking and have action.”