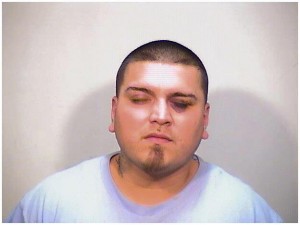 On January 30, 2016, at approximately 2:45 a.m., Lake County Sheriff’s Deputies responded to the 9800 block of West Oak Forest Drive, Beach Park, for a fight in progress with shots fired.

When sheriff’s deputies arrived they learned that multiple people involved the fight had fled the scene. They determined that the physical altercation occurred between two rival gangs and the shots were fired just prior to their arrival.

The individual responsible for firing the gun had fled the scene.

Evidence technicians arrived at the scene, located and collected numerous shell casings, as well as other evidence.

The Sheriff’s Gang Task Force began an immediate investigation into this incident. Through their investigation, the Gang Task Force determined the individual responsible for firing the gun was Eric Bickwermert, 27, of the 1500 block of Lorelei Drive, Zion, a registered street gang member.

On February 2, the Lake County Gang Task Force transported Bickwermert to the Lake County Sheriff’s Office Criminal Investigations Division, where he was subsequently arrested and charged.

Bickwermert is being held at the Lake County Jail on $75,000 bail.