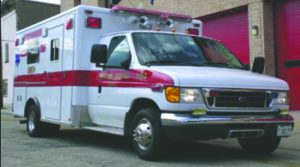 Marengo’s fire protection district and rescue squad district each had referendum questions on the April 2 consolidated election ballot that sought an increase of their tax appropriation shares to help fund overdue benefits packages for their personnel. Both referendums passed with a healthy majority.

However incorrect wording on the paper ballots, sent out to polling places, caused some confusion but did not derail the questions’ intent. The mistake was caught early and corrected.

While the unofficial tallies remained virtually unchanged from cast totals, the actual results were certified April 18 by the McHenry County Clerk’s Office and entered with the Illinois State Board of Elections.

“I was notified by an election judge, personally, and we immediately sent out flyers making voters aware of the correct version,” said Debra Nieto, deputy clerk for the county clerk’s office. “Why it happened? The short answer is … we don’t know, and have no explanation. The remedial action was quick, and the results were not impacted. All the mail-in ballots were accepted until April 16, which was the cut-off date.”

The rescue squad question of a special tax levy rate not to exceed 0.40% of the taxable property value for providing or supporting an ambulance service was approved by voters with an 850-616 margin. The fire protection district also sought an increase for the additional amount equal to 0.077822% above the limiting rate for levy year 2017, and “0.394562 of the equalized assessed value of the taxable property therein for levy year 2019” passed 761-542. The issue was 0.394562 not followed with “percent,” in its wording.

“We don’t know how it happened, we knew it was correct in voters’ guidebooks … it was caught very early and not a lot of ballots were put out,” said John Kimmel, deputy chief for the fire protection district. “Our attorneys followed up quickly and it was fixed that day some time around noon. Paper ballots were posted with the correct question in the voting booths. We were told things went smoothly, and it was monitored afterwards to ensure no problems developed.

“This is great support from the community, and we’re very humbled. We understand it’s a tough decision for taxes to go up in our state,” he said. “We are planning for the future, and putting money away … so as the prices increase, we’ll be ready to go. We did our homework on this. We started researching this more than a year ago, and funding won’t be seen right away, since the budget year starts May 1, 2020.”

First responder pensions have taken center stage in benefits packages, especially through contributions and maintaining funding levels. The city of Marengo unanimously approved its Fiscal Year 2019-20 Budget, during the April 22 council meeting, and the 19-page itemization also included the city’s contribution to the police pension fund at a $492,138 appropriation amount.

“Regarding the police pensions, we are making an effort to keep the city’s contribution at a stable level, and was discussed at the March 25 meeting,” said Marengo City Administrator Josh Blakemore.

Kimmel noted, “The 401K-type plan for our employees said that as a minimum … the pension program, we can’t even afford that even with the increase that’s coming. The package is really basic and employees were asked ‘what do you need?’”

With the fire protection district referendum question’s approval, the 2019 levy year for a single-family residence of $100,000 will see an increase of $26. The approximate amount of taxes that are extendable is an overall $1.176 million total, where the most recent limiting rate would collect $936,109.96.

“This company … and the people of Marengo and Union, they understand our needs,” said Kimmel. “Emergency responders, among our personnel, deserve a basic benefits package. This time next year, our people will start getting insurance. In essence, the real work begins now.”