In McHenry County, in a historic district and building near a hilly cemetery, and on Ridgefield Road where livestock graze a short distance away, people of all faiths gathered Nov. 2 for a vigil and community Shabbat.

The Jewish Sabbath began at sunset. 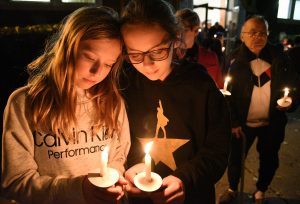 But the first Friday in November 2018 produced timely and emotional tributes from around the world, including along a Midwest Illinois rural road in Crystal Lake.

After the Oct. 27 Pittsburgh shooting at the Tree of Life Congregation when 11 people were killed during Shabbat services, the McHenry County Jewish Congregation in Crystal Lake opened its doors to welcome those for a program, vigil and sharing of a meal.

“The beautiful thing in Jewish tradition is that the holiest time, the holiest day, is every day, every moment,” said MCJC Rabbi Tom Samuels of Chicago. “And the goal is to make every moment special and meaningful.

“The most mundane, the most holy, they’re all the same. It is all one.” 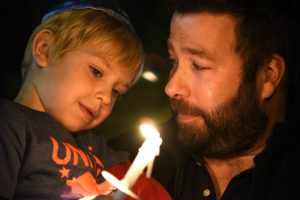 Asher Markowitz, 6, a first-grader from Fox River Grove, is held by his father Jonah Markowitz during the vigil. (Photo by Karie Angell Luc/for Chronicle Media)

The synagogue, located at 8617 Ridgefield Road, is situated across the street from a grain farming operation. Corn fields are part of the local landscape.

A McHenry County Sheriff squad car was parked in front as headlights from arriving cars cast light on the synagogue, a congregation that has the year 1979 etched on its building facade.

Over the beveled front entrance, one can see original and vintage identification marking the former Ridgefield District 48.

“We have to make now matter,” Samuels said. “It is a sad time, it’s a crazy time. If you prick us, we do bleed. We’re human beings.” 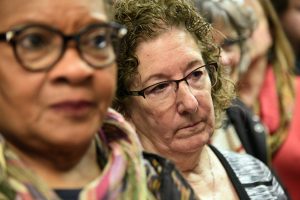 Ellen Levy (center) of Lake in the Hills listens from a hallway door. (Photo by Karie Angell Luc/for Chronicle Media)

An overflow audience filled the synagogue with people standing in the lobby and on the sides of the room to experience the message.

“I feel outraged at the deranged atrocity in Pittsburgh,” said the Rev. Paul Nelson of First Presbyterian Church of Woodstock.

The person accused and charged with the Pittsburgh massacre is gunman Robert Gregory Bowers.

“I also feel resolve to work with the Jewish congregation to respond with deep love and justice,” Nelson said.

Attendees of many faiths were represented in the audience.

“We wanted to show our support and solidarity for the Jewish community,” said the Rev. Scott Zaucha of St. Ann’s Episcopal Church of Woodstock. 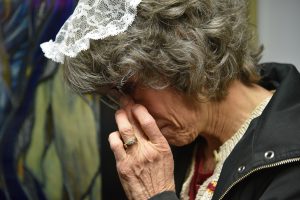 In a lobby vestibule, a woman dabs her eyes during tributes. (Photo by Karie Angell Luc/for Chronicle Media)

Eleven candles were illuminated during the service in honor of the 11 deceased congregants from the Pittsburgh synagogue.

“I am overwhelmed at the people who are coming out to support us,” said Ellen Levy of Lake in the Hills, who welcomed attendees at the MCJC front door.

“I feel a mixture of sad and grateful for community support,” said Muriel Pick of Island Lake, who also greeted people. “It’s difficult.”

After songs, commentary and prayers, attendees went outside to the front lawn where a large maple tree in full fall color towered over clusters of people who held candles in 41 degree, rain-free conditions. 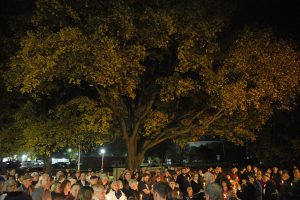 The mature tree offered a spread of orange, color complementing the warm hues of flickering candles under the arbor’s canopy.

Could the imagery symbolize a Tree of Life?

“We’re still human,” said Katherine Witt, 11, a sixth-grader from Crystal Lake who stood close to her mother Brandi Witt, during the vigil.

Both of their faces glowed from the candlelight.

“We’re all just trying to get through the day, doing the best we can,” Brandi Witt said. 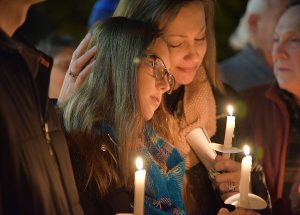 Katherine Witt, 11, a sixth-grader from Crystal Lake, stands with her mother Brandi Witt during the vigil. (Photo by Karie Angell Luc/for Chronicle Media)

According to a statement on the Tree of Life Congregation of Pittsburgh website, “We are humbly moved by the outreach of support for our synagogue while we mourn the loss of our congregants in the wake of the horrific anti-Semitic attack on our religious home.”

Donation portals are in place to assist the Tree of Life synagogue and families of victims.

“The support shown worldwide proves that love truly is stronger than hate,” according to https://www.tolols.org.