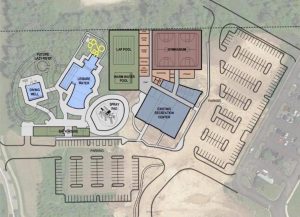 A plat map displays the proposed expansion of the McHenry Recreation Center to accommodate an indoor pool and outdoor aquatic park with other amenities. (Courtesy of the McHenry Parks and Recreation Department)

The McHenry City Council will proceed with the preparation of a referendum question for the Nov. 6 general election ballot that would propose the addition of an indoor pool, a gymnasium, and an outdoor family aquatic park to the McHenry Recreation Center.

The 5-2 vote in favor of the question, during the June 4 session, also seeks the issuance of $30 million in city bonds to fund the expansion.

As part of the proposal, “factual information” will be provided to residents in advance of the election date. Voter approval of the referendum question will effectively raise property taxes by $15 per month on a $168,000 home, or an increase of $180 annually. The bond life will be fixed at a 20-year term.

The project is the result of a 35-item community survey that was circulated last summer to assess what amenities that residents would prefer.

“We presented the results to the city council last November and then it was followed up with an actual pro forma effort in that we know what the community is asking for … now, what can we do to bring it about with this facility,” said McHenry Parks and Recreation Department Director Bill Hobson. “We identified what was wanted for indoor and outdoor recreation. The indoor pool and outdoor aquatic park, along with the walking paths, kept popping up.

“There was also a community survey in 2004, which also showed that walking paths are always a popular amenity,” he said.

The $5.8 million McHenry Recreation Center opened in February 2016, and the 18,200-square-foot facility boasts a fitness center that encompasses nearly one-quarter of the floor space.

The city council voted 4-3 in December, to undertake a three-month study on the feasibility of an indoor pool at the recreation center and retained the Schaumburg-based firm of Heller and Heller Consulting LLC at a cost of $19,000. The study incorporated the survey findings, an operational format for the venture, and the area’s demographic data.

Starting in 1999, the city began setting aside 50 percent of all park developer donations in a separate fund for the purpose of constructing a combination fitness and aquatic center. The city had accumulated approximately $4.5 million before embarking on a stand-alone fitness center, with the intention of being able to add an aquatic park and other upgrades at a later date.

The recreation center, located at 3636 Municipal Drive in McHenry, would also serve as a family destination with the aquatic park addition that may have water slides, a therapy pool, and other activities.

According to its website, “The recreation center features a 4,500-square-foot fitness center, locker rooms, available babysitting, plus two studios for dance and group exercise. The center also features three multi-purpose rooms for expanded recreation program space and private rental. Fitness memberships include access to over 60 group exercise classes a week, locker room access, and the latest in cardio and strength training equipment.”

“McHenry has an outdoor pool at Knox Park on Green Street, which was built in 1993,” said Hobson. “We did an assessment study in 2013, and they found a rebuild would have to come in 10-15 years, so it’s coming to the end of its lifespan.”

The referendum question must be formally approved the city council in the form of an ordinance, and then forwarded to the county clerk’s office, no later than Aug. 20, to appear on the general election ballot.