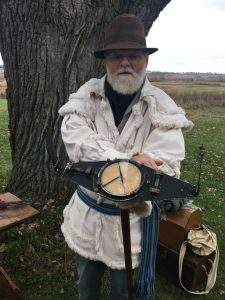 While people in the area turned back their clocks one hour Nov. 5 to mark the end of Daylight Saving Time, the McHenry County Conservation District turned back the even more when it hosted its annual “Harvest Gathering of 1858.”

Durrenburg is a retired surveyor who volunteered to recreate settlers’ lives for McHenry County Conservation District’s annual “Harvest Gathering of 1858.”

The MCCD volunteers on Nov. 5 created the environment and practices of the folks who lived in and around Powers-Walker House in Ringwood. The restored homestead is located in Glacial Park.

According to MCCD’s website, the Powers family built the frame house in 1854. Samuel Walker, a prominent local citizen and neighbor to the Powers, purchased the farm after the Powers family moved on. Unaltered for over 140 years, in 1990 MCCD volunteers began working to restore and refurbish the home’s interior and exterior historic appearance.

Elon and Mary Powers raised eight children in their Greek Revival-styled home, which they built in 1854. The “Harvest Gathering of 1858” hosted dozens of children, parents, and grandchildren. The children eagerly performed common chores like churning butter and grinding corn for johnny cake.

Matthew Kasper came with his siblings Matthew, Julie, and Timothy. Their parents Trisha and Mark who live in Cary brought their children to learn about the area and early farming. The children shouldered each other for a turn at grinding corn.

Warmth and the aroma of fried chicken greeted visitors as they stepped inside the homestead. Volunteer, Gus, explained that chickens were eaten during the summer. “Due to a lack of refrigeration, hogs were slaughtered during the cooler months.”  During the late fall, hogs were scalded and de-haired in a caldron in the front yard. “You ate everything but the oink,” said Gus.

Kiera Merrill, 9, came with her Grandpop. He told her about the event when they got together on Halloween.

“I thought it would be cool to learn about what people did 150 years ago,” she said.

Grandpop Dick Merrill, who grew up on four acres, said he “churned pounds of butter in my time. Not really a farm, but we had cows and chickens in Indiana.”

He lives in Hebron now. 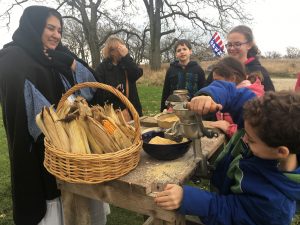 Matthew Kasper came with his siblings Matthew, Julie, and Timothy. Their parents Trisha and Mark who live in Cary brought their children to learn about the area and early farming. The children shouldered each other for a turn at grinding corn. (Photo by Adela Crandell Durkee/for Chronicle Media)

Kiera is a student at Olson Elementary in Woodstock.

An early beer brewing demonstration looked much more like coffee brewing. Sara Pfannkuche used an 1850s recipe common to her English heritage. Settlers simmered locally grown toasted rye, barley, and wheat with hops the immigrants brought with them. Orange peel, elderberry flowers, oak chips, and other flavorings got added to the brew. The beer was non-carbonated and contained about 1 percent alcohol, very different from today’s beers.

“One reason to drink beer,” Pfannkuche explained, “was to avoid disease that might be carried in water.”

“Beer and wine was not considered illegal at the time of Prohibition. So people began spiking those beverages. Six months into Prohibition, wine and beer became illegal also,” Pfannkuche said.

Pfannkuche, a beer brewing hobbyist and aficionado, likes brewing beer with vintage recipes. “After Prohibition,” she explained, “the homemade stuff became known as Grandma and Grandpa beer. People were accustomed to the higher alcohol content of the spiked beer, so that’s what they wanted.”

“When things are checked with modern equipment, it can be within inches of GPS measurements,” said Durrenberg to adults and children gathered around him under a great oak. “The measurement could be thrown off by nearby axe or gun, because of the reliance on magnetism.”

Durrenberg explained that some jogs in what seems to be straight country roads is due to surveyors compensating for the curvature of the Earth.

“If you try to run a straight east-west line, within six miles, you’re off your line already. The further north you are, the further south you’ve turned.”

Children gathered inside the house to fashion dolls out of yarn or corn husks.

Ellen Cimaglia, 11, came with her parents. She lives in Wildwood, near Gurnee.

Gail Brown represented Mary Powers who was the First Lady of the house.

“The house is in its original location,” she said. “Settlers had to show improvements to the claim by planting trees or putting up fences.”

The great oak was part of an Oak Savanna that were cleared for timber. The county now has only 13 percent of the oaks that were there before settlers arrived.

Volunteers hope to restore the original barn, which is currently under earth and steel. The earth helps preserve the wood until volunteers can begin their work. To volunteer or to learn about upcoming events, visit MCCDistrict.org or call (815) 678-4532.

—Time change also time for MCCD to turn back clock–