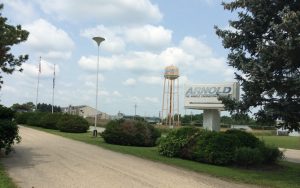 Arnold Magnetics, and its site owner, 300 West LLC, are slated for a Mar. 2 status hearing on an extension request regarding well contamination. (Photo by Gregory Harutunian/for Chronicle Media)

A Feb. 23 hearing compelling Arnold Magnetic Engineering, Inc. and its landholder, 300 West LLC, to show cause regarding a requested extension on a previous court order to bring water lines to contaminated wells has been held over.

The two entities have not met a Feb. 16 deadline date, and must now produce a report on remediation objectives and status, along with a revised comprehensive site investigation plan by March 2.

The civil litigation was filed in 2013 by the Illinois Attorney General’s Office on behalf of the Illinois Environmental Protection Agency to force compliance with required on- and off-site testing of groundwater at the plant site, located in Marengo. They also sought corrective measures for groundwater contamination from production chemicals that leeched into the water table contaminating 17 private and commercial wells in a one-mile proximity of the plant site.

The issue surfaced when Marengo crews attempted to install a well on Ritz Road and discovered the condition. In May 2010, Arnold retained a consultant group with monitoring wells to produce on-site samples. The subsequent findings detected concentrations of the vinyl chloride, PCE, TCE, and other carcinogens. The plume is migrating toward Railroad Street and potentially reaching the Kishwaukee River basin.

McHenry County Judge Michael Chmiel has presided over the case and monitored the progress. During its Feb. 22, 2016 meeting, the city of Marengo entered into an agreement for the two entities to bring water lines, connecting the municipal water system with the plant site, Railroad Street and Ritz Road. The 7-1 vote also called for a contingency annexation agreement to bring the 90-acre industrial parcel into the municipal boundaries.

“The water main is in, and they are proceeding with the acquisition of easements that will allow the piping … so that aspect needs to be addressed before piping goes to the residences,” said Marengo City Manager Joshua Blakemore. “The city’s agreement with Arnold and 300 West is outdated, and we’re also in negotiations to bring those contract stipulations into current terms. There is no timetable for the completion of the updates, due to their efforts to obtain the necessary easements.”

Additionally, the agreement covered piping locations through an engineering contract with McHenry-based HR Green, also the city’s engineering firm. “There was a contract for engineering services, and it was basically for observation services and other items on the city’s behalf,” he said. “There was a deposit on file, from Arnold and 300 West, which covered the costs of the service contract. The final cost amount was $37,000.”

Effectively, the entire project was estimated at more than $3 million and at no cost to the municipality. Hook-ups to the water main were similarly to be completed at no cost to impacted homeowners, and the applicable usage rates were to be assessed at the “in-town” rate, despite waiving the requirement for annex into the city proper.

“We recognize and understand the frustration of the impacted residents and continue to ask the court to hold the defendants accountable for completing the work,” said Annie Thompson, the Illinois Attorney General’s Office’s press secretary. “Under the judge’s consent order, the defendants are required to continue providing bottled water until the hook-up project requirements have been met.

“We recognize and understand the frustration of the impacted residents and continue to ask the court to hold the defendants accountable for completing the work,” she said. “The order spells out the schedule for the hook-up project. Because the defendants missed the Feb. 16 deadline, our office sent them correspondence to that effect, and will push for them to complete the project.”

In that correspondence dated Feb. 22, responding to the request by Arnold Engineering and 300 West invoking an extension due to a “force majure” (weather), the attorney general’s office noted that the IEPA office had not been notified 48 hours prior to any such potential event, as ordered, and that a Feb. 15 email to the IEPA showed no indication that an event had even occurred.

It further stated, “In addition, obtaining the easements and the permits is a condition precedent to the affected residents’ laterals to the water main and obtaining water service from the city of Marengo. As of Feb. 14, two days prior to the deadline … the defendants had not conducted negotiations with the affected residents regarding the necessary easements.”

Thompson said, “The water main is completed, and we are currently reviewing (their) request for a deadline extension, due to inclement weather conditions, for the installation of the water lines that will connect the mains to the houses. At this point, the information we have is that 300 West is paying for the work required under the order, and not Arnold Engineering, although they are equally responsible for the funding. This is a continuing concern for us, and it has been brought to the court’s attention.”

The issues of noncompliance penalties being incurred by the two entities through IEPA mandates along with damage claims from impacted property owners are still open-ended questions yet to be resolved.

“Those penalties against the defendants are specified in the consent order, and continue to accumulate for those violations of the order. We are prepared to seek payment for them,” said Thompson. “Our office cannot seek damages on behalf of the homeowners, which we have explained at public meetings. Impacted residents have every right to seek damages and obtain legal counsel, and our understanding is that many homeowners have already done so.”

Thompson also said the companies are required by the judge’s consent order to provide bottled (potable) water to the impacted homeowners for drinking, until such time as the line work and connections are completed.

The status hearing is set for March 2 for the reports to be submitted. March 8 is set for the trial date.

A request for comment from attorney, Stephen Sylvester, representing Arnold Magnetic Engineering, Inc. and 300 West LLC, was not returned.