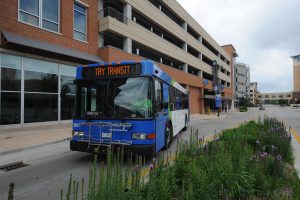 Less than a year ago, as the state was still operating without a budget, the scene within Connect Transit was precarious.

Right before the pages of the calendar turned over from 2016 to 2017, officials within Bloomington-Normal’s longtime mass transit provider warned over a potential shutdown because of backlogged payments. State funding comprises nearly two-thirds of Connect Transit’s income stream.

More than eight years later, with an operating budget in place in Springfield, Connect Transit is moving full steam ahead, rolling out a series of new initiatives aimed at keeping pace with evolving trends.

In July, Interim General Manager Isaac Thorne indicated Connect Transit is again receiving routine payments from the state. The system has received funding through the end of its fiscal cycle, which wrapped June 30, and additional payments have ensured operations are being covered well into this fall.

Alongside the improved financial picture, officials within Connect Transit this summer have unveiled a series of new efforts in the months and years ahead.

Plans are in motion, for example, to use a $3.3 million grant from the Illinois Department of Transportation and apply the funds toward the replacement of 10 vehicles within Connect Transit’s fleet.

“Twenty-three of the 42 fixed-route vehicles are past their useful life,” Thorne said. He pointed out a total of 399 vehicle failures were reported throughout the course of Connect Transit’s FY2017 budget cycle.

For the immediate future, Thorne and other officials within Connect Transit have indicated the system is making due with what it has. The grant-funded vehicles, for instance, are not expected to arrive for another year.

The new buses are expected to run on diesel, though system officials in recent years have announced a desire to eventually transition over to electric-powered vehicles. 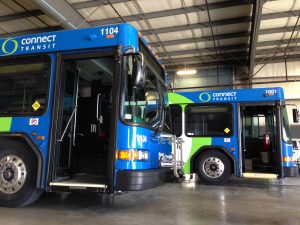 The new Connect Transit buses are expected to run on diesel, though system officials have indicated a desire to transition over to electric-powered vehicles. (Photo courtesy of Connect Transit)

Although the funding picture has improved, Thorne in recent months has indicated financial cost-cutting measures are being pursued. One of the most visible ways this has been displayed is through service routes.

The restructuring process has features that Thorne said will likely appease some passengers, though he pointed out some of the tweaks could pose some inconveniences to passengers accustomed to the system that had been in place.

“The route changes that are being implemented should improve connectivity and travel time for customers,” Thorne said.

But he added, “Unfortunately, a few route changes were made, due to budget restraints. Connect tried to inconvenience as few customers as possible with these changes.”

The revamped routes began shortly before Labor Day and will continue through this month.

Another notable change, approved by Connect Transit’s board of trustees this summer, is the addition of a feature known as the Connect Mobility premium service.

Based on prior agreements, Connect Transit is required to offer paratransit service to persons with disabilities and others with high needs who qualify. In the past, paratransit was typically offered within a three-quarters of a mile radius around fixed service.

Connect Transit is in the midst of rolling out a series of route changes, including:

-Renaming portions of the Purple Route to the Silver Route and servicing various locales, including Alexander Estates, Bloomington’s downtown and Walmart began on Sept. 17.

-Retaining the rest of the Purple Route, which will now only go to specific locales, including Bloomington’s downtown, Eastland Mall and the OSF St. Joseph Medical Center. Changes for this route also took effect Sunday, Sept. 17.