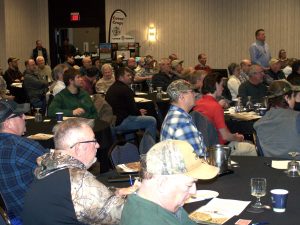 More than 150 farmers turned out for the 2020 Illinois Conservation Cropping Seminar at the DoubleTree Conference Center in Bloomington Jan. 22. They came to hear about the latest techniques and products available to

Facing pushback from a poor mid-term report card on their efforts to stem the tide of nitrogen-based fertilizers — also called nutrients — leaching from farm fields into waterways, more Illinois farmers than ever are considering going back to the basics when it comes to field management.

To that end, just over 150 area farmers met at the DoubleTree Conference Center in Bloomington on Jan. 22 to listen to a roster of experts speak about the environmental, community and financial benefits associated with adopting conservation-based cropping systems.

These cropping systems include reduced tillage of the soil, or using no tillage whatsoever. Tillage has been found to encourage nutrient runoff, and 2019’s rain-soaked spring did plenty to wash away the stewardship efforts of many Illinois and Corn Belt farmers.

Illinois farmers will be facing increased scrutiny this year when it comes to nutrient applications, thanks in part to a snapshot of their progress in attaining goals set by the voluntary Illinois Nutrient Loss Reduction Strategy (NLRS), which began in 2015.

Despite reportedly investing more than $59 million in nutrient loss reduction for research, outreach implementation and monitoring in 2017-18, the report concluded the state’s agriculture sector had not yet achieved its stated goal of reducing nitrogen entering Illinois waterways by 15 percent. In fact, farmers fell far short of their goal, according to  the Illinois Sustainable Agriculture Partnership (ISAP) and American Farmland Trust (AFT).

“The results of the report were disheartening — no progress in reducing nutrient loss. In fact, the report showed an increase in loss of phosphorus and nitrogen. The anomaly of increased water flow, or perhaps no anomaly at all given the increased propensity for extreme weather in the region including heavy rain events, did nothing to help the situation,” according to an AFT news release. “The evident role the weather played in slowing progress showed us that going forward our efforts will have to not only be about reducing nutrient runoff, but also about increasing resiliency of soils to hold water and nutrients through extreme weather.”

Practices currently being adopted by farmers to address N and P losses are apparently not going to be enough to meet the 2025 intermediate goals of the NLRS, agreed ISAP’s Jill Kostel. “ISAP is working with farmers to increase voluntary efforts to reduce nutrient runoff. We know farmers are making changes in their operations due to nutrient loss concerns —  but it simply is not fast enough and we need to accelerate the adoption of the appropriate practices in order to have a significant impact,” Kostel said in a prepared statement.

The time is now for farmers to consider wholesale changes to how they farm, according to Paige Buck, public affairs officer for the Illinois USDA-Natural Resources Conservation Service (NRCS), one of the host agencies of the cropping seminar. “Consumer demands require more accountability,” she said. “Conservation and sustainable, resilient farming systems are becoming the new norm. It’s not just one crazy guy in your county everyone talks about. Times are changing. Agriculture is changing. Production of food for the planet is changing.”

Illinois and Indiana specialty crop grower Rick Clark told the crowd at the Conservation Cropping Seminar that he and his nephew Aaron are finding success growing 100 percent organic corn and soybeans on their no-till farmland, while also utilizing overwintering cover crops.

Clark detailed the benefits of what he calls “farming green,” which includes eschewing crop nutrients and other common treatments, and never planting corn before Mother’s Day.

“Our crops are all non-GMO, no starter fertilizer, no fungicide, no seed treatment or insecticide, that’s where we are today. We don’t miss any of it,” said Clark.

“We plant a cash crop into a living, growing cover crop. We maximize what the cover crop is intended to do, by allowing it to sequester nutrients to its maximum capability as a result of going further into the (corn) growing season,” he continued. “Then the (cover) plant is terminated and those nutrients are re-released back into the soil profile for the use of that particular cash crop. I will not plant corn again in April; it’s always going to be after Mother’s Day.”

Clark claims to save more than $500,000 per year in input and fuel costs through his method of farming. The key to success, he says, is for farmers not to get too hung up on high yields.

“We average around 160 bushels per acre for corn, and that’s fine. The key to profit is in your margin, not high yields,” Clark explained. “I have a system that is growing nitrogen, growing carbon, and sequestering nutrients to take the fullest advantage of helping cash crops to grow while using the fewest inputs available.”

Clark described the erosion control provided by his green system of farming as “unbelievable,” while also increasing weed suppression. “All of this is because of the amount of biomass we can get to grow on these cover crops,” he said. “As farmers, we can have the biggest role in reversing the effects of climate change. I truly believe that. But we have to get back to farming the way Mother Nature intended us to farm.”

Brian Wieland, who works for Saddle-Butte Ag, a forage and cover crop seed dealership in Princeville, said concern among the public about how farmers are reducing nutrient loss into waterways is definitely on the minds of those in the farm input retail industry. “They want to know what measures farmers are taking to reduce nutrient losses, and seminars like this are important because they talk about not only the benefits of cover crops, but a number of other conservation cropping methods that not only reduce nutrient runoff but also provide soil health benefits,” said Wieland.