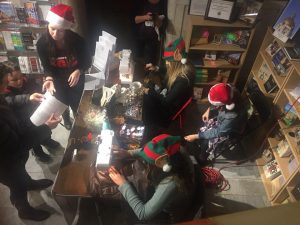 Each semester, about 30 student volunteers — many in ISU’s fashion, design and merchandising program — roll up their sleeves and fix minor rips, tears and missing buttons on clothing that is otherwise in good condition. (Photo courtesy of Elisabeth Reed)

They are a small, but dedicated, cadre of students. Armed with sewing machines, needles, thread and other supplies in their toolkit of sorts, they venture to various locales in the Bloomington-Normal area with their mission-minded service.

Since its launch in fall 2016, Illinois State University’s Fix It Friday has become a staple in the community.

Each semester, about 30 student volunteers — many in ISU’s fashion, design and merchandising program — roll up their sleeves and fix minor rips, tears and missing buttons on clothing that is otherwise in good condition.

Sophia Araya, an FDM student, currently serves as the volunteer coordinator, lending her own skills and scheduling other students who are able to repair clothing on the dates Fix It Friday is scheduled.

In its brief life, Araya said she is encouraged by the reception Fix It Friday has received locally, as well as from peers elsewhere in the country.

“I think groups like Fix It Friday are important because we have inspired other college students to create similar organizations,” Araya said in an interview with the Chronicle. “We’ve had people reach out to us about Fix It Friday and ask how they can create a similar group on their campus.” 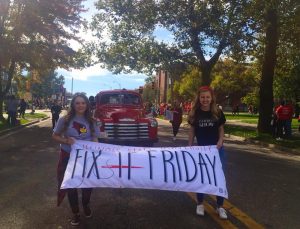 Fix It Friday is the brainchild of Elisabeth Reed, instructional assistant professor in ISU’s fashion, design and merchandising program. A trip to the Windy City planted the seed of an idea that has germinated in the past 15 months in McLean County.

Reed said Fix It Friday is modeled after a Chicago-based effort known as the Patagaonia Worn Wear Truck, which bring similar services into residents’ back yards.

“After visiting the Worn Wear Truck in Chicago, I thought, ‘Our fashion students can do this. We don’t need a truck. We can simply set up a table and chairs and a couple sewing machines — and we can fix clothing for free,” Reed said.

Fix It Friday has created a number of benefits for students and the community, Reed said, and some are more obvious than others. The student volunteers receive hands-on training, and ISU students and residents out in the community can have their clothes mended.

But there is yet another deeper reason Reed said she is pleased to bring Fix It Friday to the ISU campus and beyond.

“Students … are learning every day the harmful social and environmental impacts created by the current fast-fashion model,” Reed said, pointing to current retailing trends that emphasize low prices at the expense of clothing more prone to rips and tears.

An effort such as Fix It Friday is aimed at curbing the amount of still-useful clothing winding up in the trashcan. 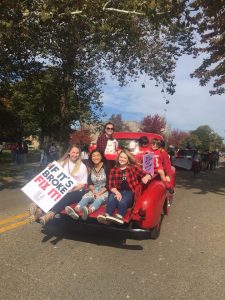 “By providing a free monthly clothing repair service to the local community, the fashion students practice their sewing skills while also reducing the amount of textile waste in the landfill and spreading the message to fix, rather than discard,” Reed said.

Araya, who aspires to work in the growing field of sustainable fashion once she graduates from ISU, offered similar sentiments about Fix It Friday’s importance.

“Our whole purpose is to spread the message of environmental sustainability, and it looks like we are achieving that,” Araya said. “I can only imagine that Fix It Friday will keep growing and receive more attention as the years go by. I’m really excited for the future.”

The efforts Reed and her fashion, design and merchandising students have undertaken recently caught the attention of a national organization.

In late October, the Association of the Advancement of Sustainability in Higher Education honored Reed and Fix It Friday volunteers with its annual campus sustainability achievement award.

ISU was one of 230 universities and colleges across the U.S. to submit entries for the award.

“We were so thrilled that our actions at the local level were recognized nationally,” Reed said.

While the honors and accolades are heartening, Reed said she also hopes the recognition will spur inspiration in the fight against textile waste.

“We hope … other universities and programs will want to start a similar program at their school,” Reed said. “In fact, I have already heard from Northern Michigan University, who attended the (awards) conference and is bringing the Fix It Friday concept to their campus.”

Fix It Fridays have been scheduled for the upcoming semester. The full schedule of dates, times and venues is available at www.isufixitfriday.org. Updates are also being posted on social media via the group’s Facebook page, www.facebook.com/IllinoisStateFixItFriday.

Seven installments have been planned from late January through early May. Several outings will take place on the ISU campus, while others will be held at public and private venues in Bloomington and Normal.