Investigation found no wrongdoing by former County Board chair

Former McLean County Board chairman Matt Sorensen did not engage in fraudulent activity within the scope of his elected duties, State’s Attorney Jason Chambers said in a recent report. Sorensen stepped down from his leadership post in January after potentially facing federal charges on allegations he defrauded State Farm and other companies of more than $400,000 in consulting fees for services that were never rendered. None of the allegations facing Sorensen are directly linked to county-related business, but county officials engaged in an internal investigation when the announcement was first made.

McLean County’s unemployment rate climbed from 5.2 percent to 6.4 percent in year-over-year comparisons, statistics from the Illinois Department of Employment Security have revealed. The statistical period compared January 2015, when there were 93,600 persons working, to January 2016, when the workforce was trimmed to 92,500 persons. The shutdown of Mitsubishi Motors’ plant in Normal is cited as the primary source behind the increased unemployment in the county. 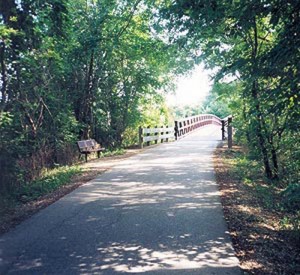 Constitutional Trail will be one of the locations around Bloomington-Normal where volunteers will be out for the annual community cleanup days April 2-16. (Photo courtesy Bloomington Parks and Recreation)

Organizers across Bloomington and Normal will hold their annual community clean-up activities from Saturday, April 2 to Saturday, April 16. Activities include picking up litter, trash and debris at public parks, neighborhoods and along public roadways and along the Constitution Trail. Volunteers can choose a location of his or her choosing. To sign up, visit www.bncleanup.org. For information, call Joe Tulley at (309) 454-9557 or email jtulley@normal.org.

McLean County moved up, in year-over-year comparisons, in a statewide ranking of the state’s healthiest counties, according to a recently released report. In its seventh annual report, the Robert Wood Foundation and the University of Wisconsin’s Population Health Institute moved McLean County’s ranking from 30 to 22. The ranking is based on a 40-point scale and takes into account such criteria as birth rates, smoking usage statistics and access to healthcare. To view a complete ranking of all Illinois counties, visit www.countyhealthrankings.org.

The Bloomington Police Department’s Vice Unit recently arrested a 58-year-old Bloomington man in the 400 block of East Market Street and, in the process, recovered a stolen gun and seized 69 grams of cocaine and hydrocodone pills. The arrest occurred during an investigation Monday, March 14, of illegal drug sales in the community. The man is being detained at the McLean County Jail as formal charges are being processed.

The lengthy search for 52-year-old Bloomington resident Clyde Lambert was called off Friday, March 11, when he was found safe in Springfield. Lambert’s family called police, expressing concern about his whereabouts in mid-November, though he voluntarily left a family member’s home and had not been seen since late October. According to Bloomington Police, Lambert has a history of long absences, though concern had grown when family members were unable to contact him and learn of his location and well being.

Curbside landscape waste collection will resume the week of Monday, March 28, in Normal alongside regular refuse collection days. As has been the case in the past, all yard waste should be placed curbside no later than 6 a.m. the day of collection and no earlier than 6 p.m. the prior day. Yard waste includes weeds, leaves, grass clippings and other vegetarian that easily decomposes. For information, call the town’s public works department at (309) 454-9571.

Officials in the town of Normal recently selected competitive energy supplier Constellation as the private company to provide electricity to about 15,300 eligible residences and small businesses through Illinois’ government aggregation program. “(It) offers residents an easy option to manage and limit their energy costs,” Town Manager Mark Peterson said in a statement. “This is a good deal for the town and a great opportunity for our residents.” According to Constellation representatives, the electricity supply agreement will provide price protection and 24-hour customer service to all users.