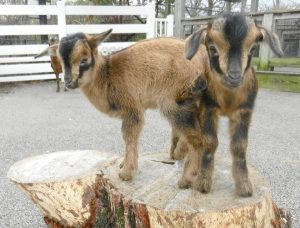 The children’s zoo at Miller Park Zoo is just one of the attractions that helped the zoo draw record crowds in its 125th year. (Photo courtesy Miller Park Zoo)

With an operational wind down having reached its conclusion, representatives of Mitsubishi North America have announced their plant in Normal is being sold to an auctioneering and liquidation firm: Maynards Industries.

The transaction will take effect Wednesday, June 1. Maynards, which has a presence in the U.S., Canada, China, Europe and Japan, touts itself as the world’s largest liquidator of automotive machine equipment. The company’s portfolio of recent projects includes the sale of 16 General Motors plants from 2009 to 2012.

On the heels of a disappointing fundraising campaign season, officials within the United Way of McLean County have announced cuts in financial contributions to three partner agencies and programs: Bloomington-Normal YMCA’s Youth Fitness Intervention program, the Girl Scouts of Central Illinois’ Leadership Experience Outreach program and the W.D. Boyce Council of the Boy Scouts of America’s Life Skills 101 program.

The recently completed fundraising campaign netted the local United Way chapter $3.53 million, down from $4.26 million the year prior.

When it comes to visitors shelling out money for attractions, McLean County ranked 8th of all Illinois counties, Crystal Howard, director of the Bloomington-Normal Area Convention and Visitors Bureau, said in a recent report.

Tourism money throughout 2015 totaled $352 million, Howard said, which is an increase from prior years. Howard attributed the McLean County Museum of History’s year-old Route 66 visitor center as part of the reason behind the uptick in tourism dollars.

Bloomington’s Miller Park Zoo has welcomed 114,311 guests to the venerable facility this past year, organization officials announced recently, and the figure surpasses a previous attendance record of 113,631, which was notched in 2005.

The zoo, which is celebrating its 125th anniversary this year, had a variety of family-focused programs this past year, including animal enrichment days, a zoo safari camp and a Star Wars-themed event.

“We are happy to be welcoming so many guests to enjoy all the zoo has to offer,” the zoo’s director, Jay Tetzloff, said in a statement.

The city of Bloomington will enlist the services of Wauconda-based Rowe Construction throughout the next municipal budget cycle, officials have announced. The City Council entered into an agreement with Rowe at a meeting Monday, April 25.

The city has plans to resurface a number of roadways within the next year. Details can be found on Bloomington’s official website, www.cityblm.org.

Bloomington Beer Fest, the annual event noted for craft beer tastings and a full menu of entertainment, is returning over a two-day stretch — Friday, June 17 and Saturday, June 18 — during Father’s Day weekend, organizers have announced.

Visitors of this year’s event will have an offer to sample 250 varies of beer and 40 wines. Headline acts this year are the Chicago Farmer Band and the Kris Lager Band. For more details on this year’s program, visit www.artsblooming.org.

After receiving a growing number of calls related to animal complaints across the community, officials within the Bloomington Police Department have issued a formal statement on what steps residents should take in addressing animal complaints.

According to the department, the only time a person should call 911 is in the actual case of an emergency, where safety is an issue.

For all other calls — including noisy animals, sanitation-related issues and dogs and cats running at large — residents are asked to call the department’s non-emergency line at (309) 820-8888.

Portillo’s, the Chicago-based eatery noted for its hot dogs and Italian beef sandwiches, has announced plans to open a store in Normal.

Other than making the blanket statement, company representatives have not revealed any further specifics, including the actual location of the restaurant, other than to say it is targeted to open at some point in 2017.