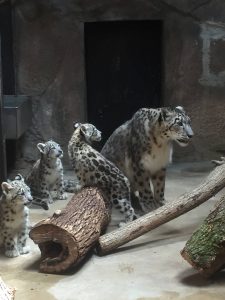 The zoo recently served as a host site for scientists exploring ways for endangered species to reproduce in captivity. Teams of scientists from other U.S. zoos were at Miller Park Zoo in 2018. (Photo courtesy of Miller Park Zoo)

You could say the Miller Park Zoo ended 2018 on a high note.

From an outside organization’s sensory certification recognition to hosting what could potentially be a scientific breakthrough, zoo officials capped off the year with a number of notable developments and announcements.

As the longtime cultural amenity enters its 128th year of existence, zoo officials said visitors from Central Illinois and beyond will have an opportunity to enjoy more new features as 2019 gets underway.

“We have two big things coming up this year, from a physical perspective,” Jay Tetzloff, zoo superintendent, said in an interview with the Chronicle.

Last year, city officials formally announced the zoo would receive several upgrades as part of a long-range capital project plan. The zoo is under the city’s auspices and is folded into the parks, recreation and cultural arts department.

“These are things people have been asking for,” Tetzloff said. “They want a place to be able to sit down to eat and drink. There’s also been a demand for more parking.”

The concessions, a first-ever feature at MPZ, will benefit more than just zoo-goers, Tetzloff said. The added space intentionally will have dual entrances — inside and outside the zoo grounds — so people visiting the surrounding parkland can use the amenity as well.

Zoo officials capped off 2018 with a number of notable announcements about animal exhibits, and Tetzloff said the trend will continue this coming year.

Plans are in motion for MPZ to feature at least one white alligator, which is a rarity within the species and will be a first-ever to the grounds.

“The exhibit should be up by May,” Tetzloff said. “That’s our target.”

The facilities and exhibit upgrades come on the heels of a recent announcement that put MPZ on the map in Illinois — and beyond. 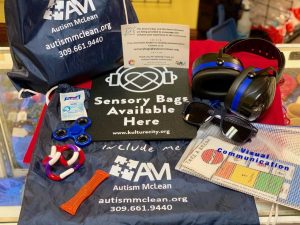 Miller Park Zoo is the first in Illinois to achieve a sensory certified designation. The organization KultureCity gave the zoo the designation for offering amenities for guests with sensory needs. (Photo courtesy of Miller Park Zoo)

In mid-December, the organization KultureCity named MPZ a certified sensory inclusive facility. It was the first zoo in Illinois to achieve the recognition from KultureCity, which was founded in 2013 with an overarching mission of helping persons diagnosed with autism to live life to their full potential.

“The idea started with one of our staff members going to a conference,” Tetzloff said of the certification. “From there, we brought other staff in, and eventually everybody was on board. We think all of our guests should be able to zoo. That’s most important, first and foremost.”

MPZ could gain notoriety beyond McLean County in the near future for another reason.

In mid-December, MPZ served as a host site for a scientific study that could lead to greater solutions in the road ahead as experts explore options for procreating endangered species in captivity.

Scientists from zoos in Cincinnati and Omaha were at MPZ last month, collaborating on a research study involving snow leopards, which are in danger of extinction and are housed at the local facility.

By using two different procedures, scientists are hoping to glean more conclusive evidence on the most effective ways of artificially inseminating the females.

“Part of our mission is to protect endangered species,” he said.