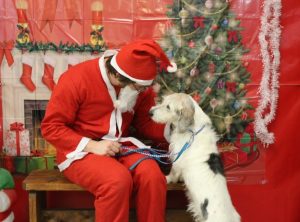 Bob, a Wish Bone canine rescue in Bloomington, shares a Christmas wish — perhaps for a forever home — with Santa during a recent holiday event at the shelter. (Photo courtesy of Wish Bone Canine Rescue)

It’s been a long and winding journey, but a Bloomington-based organization dedicated to giving canines a second chance at finding a loving home has reached a decade milestone.

Wish Bone Canine Rescue, which began in 2009 as Veterinary Rescue Associates, has gone through a few changes since opening its doors. In addition to the obvious name change, the organization narrowed its focus to dog adoptions early on in its existence.

The dogs taking up residence at Wish Bone might, in some instances, have checkered pasts — due, in large part, to human neglect and abuse. But Knightwright said the dogs’ pasts should not define their futures.

“The dogs here are really good dogs,” Knightwright said. “Many of them will be completely different when they get out of this place. They just need some patience — and love.”

Lisa Kitchens, Wish Bone’s founder and first president, began Wish Bone out of her home in 2009. When that year came to a close, the organization found homes for 68 companion animals. A year later, the organization achieved nonprofit status — an important milestone since all donations became tax deductible.

By 2011, under Kitchens’ leadership, the decision was made to change the organization’s name from Veterinary Rescue Associates to Wish Bone Canine Rescue — an overture that paid homage to her canine companion, Wish, who had died around this time. 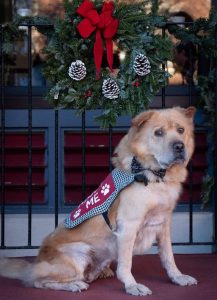 A professional portrait of Princess, one of the dogs being cared for at Wish Bone Canine Rescue.  (Photo by Paws and Nature Photography /courtesy Wishbone Rescue)

As Wish Bone gained its footing, a hard-and-fast mission statement was put in place, and today the organization is described as a “no-kill” shelter.

The designation essentially means all healthy and treatable homeless dogs should have the right to live. Euthanasia only should be used for dogs that are too sick, too injured for rehabilitation or too vicious with a poor prognosis for rehabilitation.

With each succeeding year, the number of adopted dogs and the organization’s volunteer base continued to grow, Knightwright said. In fact, he said, volunteerism has been the core backbone to the organization, from the get-go.

“While we do have a lot of volunteers, we can always use more,” Knightwright said. “We have the best volunteers in the world. They are 100 percent a part of our lifeblood. We really couldn’t do what we do without them.”

Students from all of the local universities and colleges have been a part of Wish Bone’s volunteer program, Knightwright said, as have a number of local companies and organizations.

In addition to lending a hand within the shelter facility, some of the volunteers also serve as foster hosts, giving the dogs an important opportunity to experience a different living space.

Volunteers also lend a hand in one of Wish Bone’s many community-based events, held at different venues throughout the year. While the events raise the organization’s profile, Knightwright said they also give the dogs much-needed socialization with the outside world.

While Knightwright and other volunteers form an undeniable bond with the dogs taking up residence within the facility, one of the happiest moments, Knightwright said, is seeing one leave Wish Bone — for good.

“Happy dogs going home — it’s one of my favorite parts of this place,” he said. “It just makes my day when that happens.”

ADOPTION EVENT: O’Brien Mitsubishi, 1601 Fort Jesse Road, in Normal, will be hosting some of the adoptable dogs now at available at Wish Bone on Saturday, Dec. 28, at 1 to 4 p.m. For more information, go to http://www.wishbonecaninerescue.org.