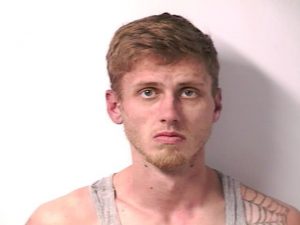 An Arkansas man faces multiple charges, including armed violence, after leading police on a chase through southwest Illinois towns and crashing into two vehicles on Illinois Route 111.

Christopher Hamby, 30, of Jessieville, Ark. was charged with unlawful possession with the intent to deliver methamphetamine, unlawful possession of weapons by a felon, criminal damage to property over $500, aggravated fleeing or attempting to elude a police officer and armed violence.

Police said Hamby was seen driving recklessly in Bethalo and Alton. He eventually drove into Wood River where an officer spotted him and tried to stop him, according to police. Hamby disregarded any attempts to stop the vehicle and drove into a school zone in a reckless manner, throwing items from the vehicle, police said.

Hamby was taken into custody by officers from the South Roxana, Roxana, Alton and Wood River police departments.

Police said a search of Hamby’s vehicle found methamphetamine and ammunition. Following the pursuit, a .40-caliber firearm was recovered on a street where Hamby was throwing items from the vehicle, according to police. The firearm matched the ammunition that was in Hamby’s vehicle, police said.

Hamby is a convicted felon, not allowed to possess weapons or ammunition.

The Arkansas man was being held in Madison County Jail in lieu of $150,000 bond.