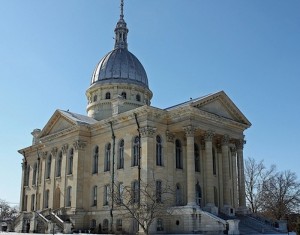 The Macoupin County Civil War Round Table is raising funds to rehabilitate the cannon, which is a landmark on the grounds of the Macoupin County courthouse. A new aluminum carriage will replace the current concrete mount, and the barrel, a six-pounder, will be completely restored.

“It’s an important part of the history of Macoupin County,” said Alan Ashby, a Carlinville businessman who is helping to organize fundraising efforts. “I think it’s important to preserve this kind of history for everyone, to show where we came from and why we’re here.”

Along with Ashby, other round table members spearheading the effort include businessman Norman Crays of Carlinville, farmer Steve Hicks of Roodhouse, and bookstore owner John Alexander of Virden.

Recent activities of the group have included a raffle of a replica of a Springfield Heritage revolver.  Private donations are also being sought.

This is the third effort of the round table to preserve the area’s Civil War history.  In 2012, a successful drive was completed to restore the national colors of the 122nd Illinois Infantry, a regiment composed mostly of Macoupin County men.

Late last year, the round table also wrapped up an effort to restore the regimental colors of the 122nd Illinois.  Both flags are now on display in the Macoupin County courthouse.

“We’d like to thank everyone who has contributed to these projects,” said Crays. The response has kind of overwhelmed us, and we really appreciate the support we’ve had.”