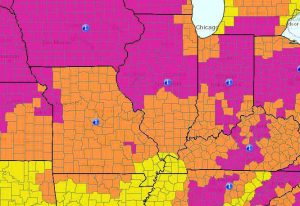 The U.S. Environmental Protection Agency (EPA) is urging residents across the Metro-East  to test for radon — an odorless, colorless, radioactive gas that can seep into homes and, at high levels of exposure, can cause lung cancer in some people.

Madison, St. Clair and Clinton counties sit near the center of a wide swath of the central U.S., which studies have shown to have higher-than-average indoor radon exposure rates, according to the EPA.

The agency recommends homeowners in areas test to determine if their specific dwellings are subject to high levels of radon exposure and, if so, consider home improvements to mitigate the risk.

In addition to the three core Metro East counties, the radon advisory covers the neighboring Southern Illinois counties of Bond, Clinton, Randolph and Washington, as well as the entirety of the Missouri side of the Greater St. Louis area, encompassing the City of St. Louis, St. Louis County, St. Charles County, Jefferson County and Franklin County.

Jersey County lies at the Southern tip of a wide ban of central to northern Illinois counties found to have  highest average levels of indoor radon exposure, according to the EPA.

The three southernmost counties in Illinois tend to experience lighter than average radon exposure, according to the agency.

The EPA renewed its call for radon testing and remediation last week as part of its annual January observance of National Radon Action Month.

Technically, Jersey County and most Illinois counties to the north are classified by the EPA as Zone 1 areas, with predicted average indoor radon screening levels greater than 4 pCi/L .

Madison, St. Clair and Clinton counties, as well as most the rest of the surround area are classified at Zone 2 areas, with predicted average indoor radon screening levels from 2 to 4 pCi/L .

EPA classified Zone 3 counties, such as those found in the tri-state area around the Missouri Boot Heel,  have predicted average indoor radon screening levels less than 2 pCi/L .

For those who wish to test their dwellings for radon, the Illinois Emergency Management Agency (IEMA) offers a referral list of providers for low-cost list radon test kits and detectors.  Radon tests can also be purchased through many home improvement centers, hardware stores, and online vendors.

Commercial radon testing services are available — however, in Illinois, all such services must be licensed, the IEPA emphasizes. The agency offers a statewide list of licensed radon measurement professionals.

The IEMA recommends carefully assessment of all costs that may be involved, from kit costs to packaging and lab fees.

Should test results indicate a high level of radon in a home, the owners should consider remediation through a state licensed professional, according to the IEPA.

The IEPA also offers a statewide list of radon remediation providers.  The list and other IEPA radon services can be accessed at https://tinyurl.com/IEPAradon.

The department offers county residents radon test kits for purchase; complete with instructions from staff on use of the test and other guidance.

The department provides presentations on radon gas, testing, and mitigation.  For more information on any of the department’s services, (618) 296-6079.

State of Illinois now has oversight on drones

At least on the Illinois side of the St. Louis area, the regulation of unmanned aerial vehicles (UAV) — popularly known as drones — is no longer a matter for debate, the Bi-State Development Agency noted in a statement last week.

An update to the Illinois Aeronautics’ Act, signed in August by Gov. Bruce Rauner and now in effect, makes UAV oversight in Illinois an exclusive power and function of the state, according to Linda Schumm, bureau chief of Aviation Safety and Education for the Illinois Department of Transportation’s Division of Aeronautics.

Schumm reported during the second in a series of forums on drone regulation, sponsored by Bi-State and its St. Louis Downtown Airport in Cahokia, which has been attempting to develop a consistent approach to drone regulation across the St. Louis area.

The state can control where a drone takes off from and where it lands, Schumm said.

Once in the air, “as soon as it leaves the ground, it is now under the control of the FAA,” she added.

Previously existing state law protecting personal privacy, restricting what Illinois State Police can do with their drones and a Department of Natural Resources statute that prohibits use of a drone to find animals when hunting or fishing. 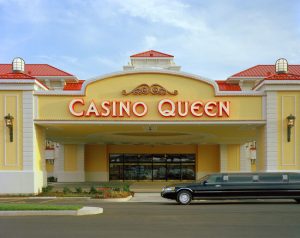 Adjusted gross revenues (AGR) at Illinois’ 10 riverboat casinos decreased during 2018, compared with 2017, according to cumulative data compiled by the Illinois Gaming Board.

The Argosy Casino in Alton continued to be the state’s lowest-grossing gaming house, last year. However, it was the least affected by the revenue downturn.  Argosy revenues inched down just 1.75 percent last year — to $486,1142 in 2018 from $494,821 in 2017 — the smallest decline in the state.

Although revenues from table games at the Casino Queen increased 1.56 percent last years, that was offset by a 6.85 percent drop in electronic gaming revenues.

Landowners, enrolled in the U.S. Department of Agriculture’s popular Conservation Reserve Program (CRP) could help ensure the survival of prairie bird populations with a few changes in land management practices, according to research published this month in Britain’s Journal of Applied Ecology by researchers at Godfrey’s National Great Rivers Research and Education Center’s (NGRREC) .

The research is important because many grassland bird populations in North America have been consistently declining for decades and properly guided management decisions may help alleviate those declines, he adds.  North American grassland birds nest predominantly on private land.

The Conservation Reserve Program (CRP) provides payments to agricultural producers to take highly erodible and environmentally sensitive land — particularly when marginal for farming — out of crop production and install resource conserving practices for 10 or more years.

Conservation reserve programs, originally established to enhance soil and water quality, have long been recognized as beneficial to wildlife.  However, the study suggests federal and state authorities need to do more to explain to farmers the importance of land management to the preservation of native animal populations.