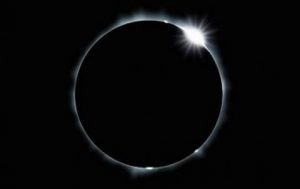 A solar eclipse occurs when the moon passes between Earth and the sun, totally or partly obscuring the image of the Sun for a viewer on Earth.  (Photo courtesy of NASA)

With an estimated 200,000 eclipse chasers now expected to converge on Southern Illinois for the Great American Eclipse and with one month to go communities across the region are embracing their status as perhaps the best places in America to experience the event.

“The far southern tip of the state of Illinois is the best place viewers can see the totality of the eclipse,” according to the website Eclipse2017.org.

The centerline of the total solar eclipse’s projected path on Aug. 21 across the U.S. from Oregon to South Carolina – known as the point of greatest duration – runs directly through numerous Southern Illinois communities. Moreover, the total eclipse will reach its maximum duration of 2 minutes and 40 second as it crosses Illinois; a full 10 seconds longer than anywhere else in the nation.

A partial eclipse of the sun, lasting around 2 hours and 45 minutes, will first be observable in Southern Illinois just before noon in the Metro East area. A total eclipse will be observable starting between 1:15 p.m. and 1:25 p.m. depending on the viewers exact location.

A solar eclipse occurs when the moon passes between Earth and the sun, thereby totally or partly obscuring the image of the Sun for a viewer on Earth. Next month’s total eclipse will be the first on American soil since 1991, the first on the mainland United States since 1979 and first in Illinois since 1948.

Adopting the mantle of “The Eclipse Crossroads,” Carbondale is planning the region’s largest array of eclipse-related activities. The paths of this year’s eclipse and a second, expected on April 8, 2024, cross in the Carbondale-Marion-Herrin area. 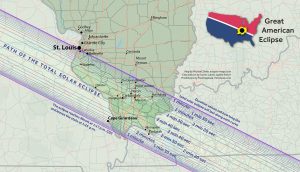 Trajectory of the Great American Eclipse across Illinois

Carbondale events — most coordinated by Southern Illinois University Carbondale (SIUC) —  include Eclipse Day at Saluki Stadium, a public viewing opportunity for up to 10,000. The stadium event will be hosted by Mat Kaplan of Planetary Radio, which airs on 150 stations and online. NASA will stream live coverage of the eclipse from Carbondale; projected on a screen at the stadium.

Local officials expect anywhere from 20,000 to 50,000 visitors depending of the weather. Hotels and resorts around nearby Lake of Egypt and Cedar Lake report high demand for accommodations. With a shortage of lodging expected, SIUC is making about 200 suits in its residence hall available.

In neighboring Carterville, the four-day Moonstock Music Festival (Aug. 18-21) is expected to draw up to 20,000. Headliner will Ozzy Osbourne will lead the crowd in Bark at the Moon as the eclipse begins.

In Murphysboro, scientists from Chicago’s Adler Planetarium will offer a presentation and telescope viewing for all ages at Big Muddy Brewing on the night before the eclipse.

However, several smaller communities actually are closer to the eclipse’s point of maximum duration.

Nearby Makanda is literally on the centerline for next month’s eclipse and “is the exact spot on earth where America’s next two Total Solar Eclipses will cross paths,” according to the town’s website. Makanda offers an eclipse viewing site and unique eclipse-related items in the town’s historic business and arts district. 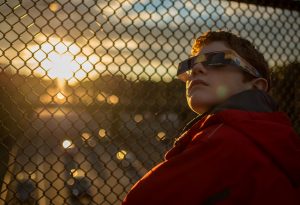 The St. Louis Eclipse Task Force has purchased 400,000 disposable protective sunglasses for distribution to eclipse viewers. Doctors warn of potential eye damage if those planning on viewing the Aug. 21 solar eclipse do not take precautions.  (Photo courtesy of NASA)

Tiny Goreville, just south of Marion, is likewise directly on the eclipse centerline and will be the observation site for a group of roughly 1,000 astronomers and other interested parties, organized by the University of Illinois.

While many communities view the eclipse as boon to tourism, at least one major eclipse-related public health concern has emerging across the region: eye injuries.

Eye doctors fear thousands of people will look up without proper eye protection to view the eclipse – forgetting that in the process they will be staring directly into the sun and placing themselves at risk for retinal burns.  The St. Louis Eclipse Task Force has purchased 400,000 disposable protective sunglasses for distribution to eclipse viewers — however, the group expects to quickly run out.

— Southern Illinois region is the star for Great American Eclipse    —