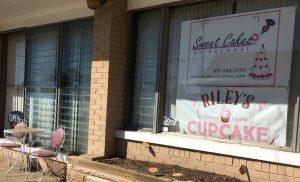 Rachael Parker plans to grow her bakery business, Sweet Cakes by Rachael, which is located along with her daughter Riley Greenwood’s vegan bakery at 1233 W. Brons Ave. in Peoria. Parker has been baking cakes and other sweets part-time for at least 30 years. (Photo by Elise Zwicky)

After seven years of helping businesses thrive and grow in Chillicothe, economic development director Rachael Parker is stepping down to grow her own full-time business.

Parker will work through the end of April before turning her full attention to her bakery business, Sweet Cakes by Rachael, located in Peoria.

“I’ve kind of been contemplating it for awhile, but, of course, I came up with every excuse in the world not to do it,” Parker said.

The unexpected death of her brother, Floyd Lewis, in November pushed her to make the decision. “He used to tell me I was wearing my body out by working here all day and then going to the bakery and working late into the night,” she said.

“When he died in his sleep of a heart attack, I realized I could go to sleep tonight and not wake up tomorrow, and I would never know if I could have made (the bakery) work or not,” Parker added. “I just turned 59, and I want to give it a shot while I’m able.”

Parker will work as economic development director through April and will be training her replacement, Amanda Beadles, who will work part-time until May 1. Beadles’ appointment was approved by the Chillicothe City Council in March after several candidates had been interviewed. She previously worked as marketing sales manager at Pearce Community Center.

Parker said she’s glad to be able to work with her successor before leaving “because when I got the position, no one was here to show me anything.”

Parker had worked as an economic development specialist for the city of Peoria for five years before being laid off along with all but one person in that department at the end of 2011. She was hired by the city of Chillicothe a month later to replace Greg Truninger, who had left to take a job with Caterpillar.

“She entered the position cold. There was no one there to assist her in her transition into the position,” Mayor Don White said of Parker. “Once she got her feet on the ground…she spearheaded many community events, initiated numerous development opportunities and gained respect in the community. She will be missed.” 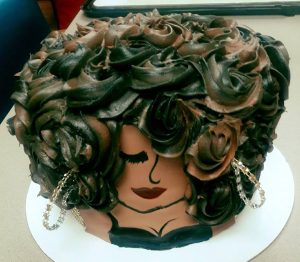 Rachael Parker specializes in birthday cakes, like this diva cake, at her Peoria bakery, Sweet Cakes by Rachael. Parker said she is probably best known for her key lime cake, which won awards two years in a row at the Taste of Peoria. (Photo courtesy of Rachael Parker)

Parker added, “I would like to thank Chillicothe for accepting me. When I first came here, I didn’t see people that looked like me, so I wasn’t real sure how I’d be received. But I really had absolutely no issues with anyone ever, so that was very nice.”

Among accomplishments she’s most proud of, Parker cited creation of the Tuesday Morning Business Connection meetings that brings together business owners or managers and city officials for an open discussion of any topic anyone deems is important.

Another highlight is the implementation of Downtown Thursdays during summer months when businesses and vendors set up tables on the sidewalk for a community party of sorts.

She’s also proud of her efforts to make businesses aware of the city’s two tax-increment financing (TIF) districts, which essentially reallocate funds from property taxes to encourage investment within the districts.

“This TIF has been around a long time, but it just wasn’t being used for whatever reasons,” Parker said. She cited the new Dollar Tree store located in the former ALCO discount store building on South Plaza Drive as one accomplishment that TIF incentives helped achieve.

“That building had been vacant for years,” she said. “Now Dollar Tree is in there, and we’re trying to help them find someone to go in on the other side of the building.”

“Business growth and opportunity create a town (in which) people to want to live, shop and raise families,” Beadles said. “I look forward to meeting with business owners, educational institutions and community organizations, listening to their needs and connecting them to the available resources. I am passionate about helping local businesses to grow ‘in place’ and keeping and developing jobs in our community.”

Parker, who lives in Peoria, plans to visit Chillicothe often and will likely set up a tent with cupcakes at various city events.

She first started her bakery business out of her home more than 30 years ago before her son, Ryan, was born. Her daughter, Riley Greenwood, operates a business called Riley’s Vegan Sweets and Eats in the same location as Sweet Cakes by Rachael at 1233 W. Brons Ave. in Peoria.

“I do cakes for all occasions. We’re probably the only bakery that delivers birthday cakes,” Parker said. 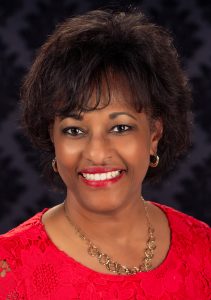 After seven years, Rachael Parker is leaving her job as Chillicothe’s economic development director to work full-time on her bakery business, Sweet Cakes by Rachael. (Photo by DRAKE Photo)

With more time to devote to marketing, particularly on social media, Parker hopes to expand and grow her business, as well as her daughter’s. Parker currently has contracts to provide cakes for birthday parties through the Peoria Park District and Five Points Washington and hopes to add more.

She also plans to expand the shop’s hours by mid-May. “Right now we’re open from 10 a.m to 2 p.m. Tuesdays through Saturdays because those are the only hours we can handle with just Riley and myself,” Parker said.

One of her signature items is a key lime cake, which won awards two years in a row at the Taste of Peoria. “We also do cupcakes, cookies, some pies, cobblers and the vegan items,” she said.

“I’m looking forward to the challenge of growing my business and seeing if I can take my own advice that I was giving people who would come in here to help boost their business. I’m also looking forward to having a little bit more control of my time,” Parker said.

For more information about Sweet Cakes by Rachael, visit the shop’s Facebook page or  email Parker at rachaelcakes@yahoo.com or call 309-688-5990.