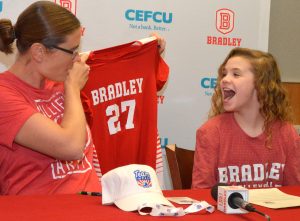 Ten-year-old Allie Salmon of Pekin reacts with joy and surprise after being given an official Bradley University jersey by women’s volleyball coach Carol Price-Torok. Allie, who battles a rare autoimmune disease, has been named an honorary member of the team. (Photo by Elise Zwicky)

The newest player to officially sign onto Bradley University’s volleyball roster is only 4-feet-6-inches tall, but 10-year-old Allie Salmon packs a lot of spirit and determination into her small body.

The fifth-grader from Pekin, who battles a rare, potentially life-threatening immune dysfunction known as juvenile dermatomyositis (JDM), signed a letter of intent during a special ceremony recently at Bradley’s Renaissance Coliseum in Peoria.

Allie was matched up with the volleyball team through a nonprofit organization called Team Impact that connects children facing serious and chronic illnesses with local college athletic teams to form lifelong bonds.

She grinned with surprised joy as Bradley volleyball coach Carol Price-Torok presented her with an official Bradley jersey sporting the number 27, the same number Allie wears when playing on her own volleyball and hockey teams.

Allie’s family had previously provided the coach and team with special Bradley-red “Allie’s Army” T-shirts that they all wore at the signing. The Salmons designed and typically sell the shirts in green as a way to raise funds for Cure JM, a nonprofit organization focused on finding a cure for juvenile dermatomyositis and juvenile polymyositis.

“It’s pretty special that she gets to be involved in our program, and we get the opportunity to learn more about what she’s going through and how we can help and bring awareness,” Price-Torok said. “It’s a small little thing to let somebody come in and shag balls during practice, but I think we’re on the better receiving end of this. She’s part of our family now.”

The team not only has adopted Allie but has also welcomed her family with open arms.

Allie’s parents, Dustin and Corrie, along with three of her siblings, 13-year-old Avery, 6-year-old Axton and 3-year-old Arisa, were on hand for the official signing and attend 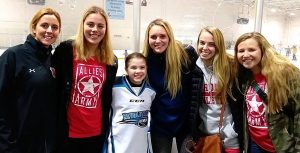 most of the Bradley volleyball games with her. All but the youngest, including older brother A.J., 18, are hockey players.

In addition to cheering on the Bradley team at games, Allie attends practices once a week at which the players sport their “Allie’s Army” shirts.

“It’s our practice swag to help fight for her and bring awareness to her cause and how hard she has to fight and what she’s going through at such a young age,” Price-Torok said. “How she’s able to handle herself and how she talks to our players and my staff is pretty incredible. She’s mature beyond her years.”

Both Price-Torok and player Hannah Angeli, a junior from Minnesota, said they were surprised and delighted at the girl’s athleticism despite battling JDM.

“I knew she had played volleyball a little bit and at her age they usually play with lighter balls, but she was serving balls over the net and jumping and hitting and doing everything we were doing at practice,” Price-Torok said. “To see her in action was pretty fun. We’re really glad that she’s continuing to be athletic and is able to do the stuff that she loves, even though she’s battling the disease.”

Angeli added, “We love her energy, and we just like to help her keep pushing no matter what. Being an athlete in general is just so taxing on your body. I can’t imagine having a disease, too. That’s just a double whammy. But then she’s still pushing through and being a complete stud and a complete star on the team, which is just amazing to all of us.”

Allie was diagnosed with JDM in June 2016 after first showing symptoms of a rash, followed by muscle weakness. JDM is an inflammatory disease of the muscle, skin and blood vessels that affects only about three in one million children each year. Part of her treatment involves monthly infusions of intravenous immunoglobulin at St. Louis Children’s Hospital, which can cause painful side effects for up to a week after.

“We were very lucky that she was diagnosed early,” said her mom, Corrie. “The reason that it’s life-threatening is that the organs can get involved, and some kids go a long time before they get a proper diagnosis and can start treatment.”

Allie had a rash for about nine months, which doctors originally thought was eczema. “Then her muscles got involved and she could no longer get up off the floor or into the car unassisted, and her pediatrician felt like it could be lupus, but there were some things that didn’t add up,” Corrie said. “So he sent us to a specialist who took one look at her and said, “It’s not lupus, but I know exactly what it is.’ ”

Allie had been playing soccer, softball and hockey before being diagnosed but gave up soccer and softball because too much sun exposure can affect the disease.

“As an athlete myself, if I would’ve had baseball taken away from me at a young age, I would have been devastated,” said her dad, Dustin, at the signing. “But she stopped playing softball and started playing volleyball. She stopped playing hockey for a season and a half and then came back bigger and stronger and better. Her attitude definitely has been an inspiration for us.”

Members of the Bradley University women’s volleyball team and coach Carol Price Torok (front center) pose with 10-year-old Allie Salmon after the Pekin girl signed a letter of intent to join the team during a special ceremony at Bradley’s Renaissance Coliseum. Allie, who battles a rare autoimmune disease, attends team practices and games and also plays on her own volleyball and hockey teams. (Photo courtesy of Bradley Athletics)

Allie looks forward to practicing with the team every week and has decided she wants to play volleyball for Bradley when she gets older, although she’d also like to play college hockey someday. As for a career, she said, “I really want to be an Olympian in hockey, but that’s probably not going to happen, so I want to work as a nurse at an infusion center.”

Coach Price-Torok said having Allie on the team is “almost like having a little sister.” In typical big sister fashion, several of the players turned out to watch Allie and her sister Avery play hockey recently.

“I cannot even begin to tell you the ridiculous amount of happiness that brought to the girls, as well as the rest of us,” Corrie said.

For more information about JDM, visit the website www.curejm.org.