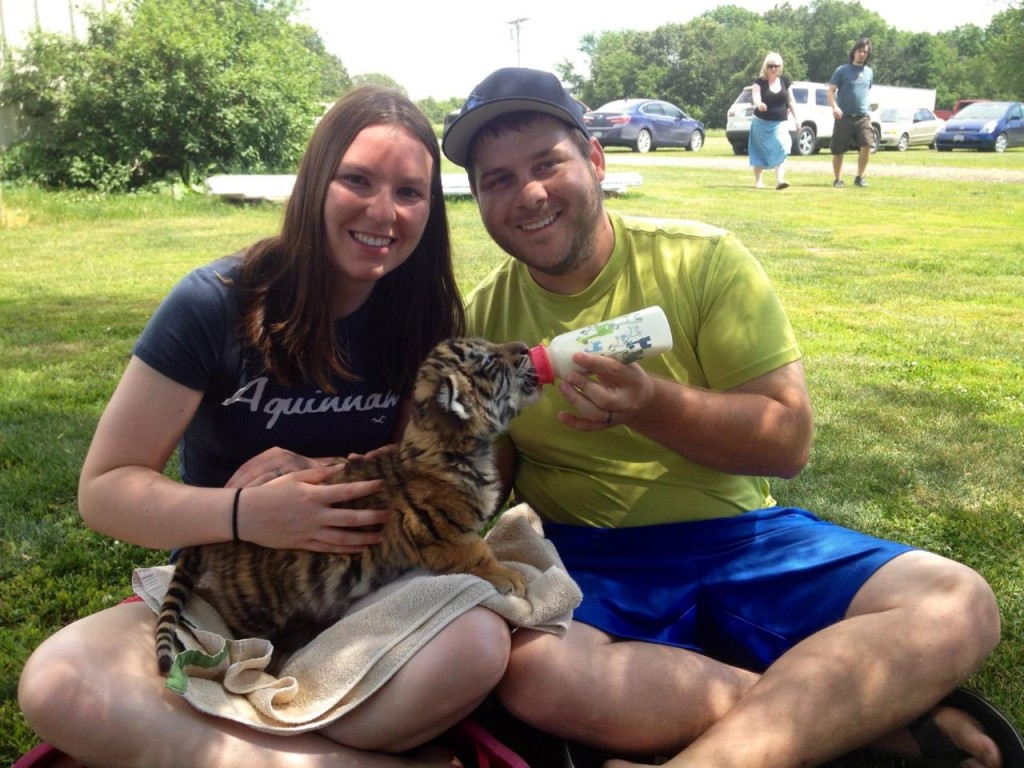 If holding a baby tiger is on your bucket list, you can check it off with a drive to Brown’s Oakridge Zoo in Fulton County.

About 45 miles southwest of Peoria in Smithfield, Brown’s is the only family-owned zoo in Illinois and features 40 different species.

“We started in 1990 with a pot-bellied pig and a few white-tailed deer,” said Nancy Brown, who owns and operates the nonprofit zoo with her husband, Ivan. “We got all our proper licensing and started rescuing some big cats, and one thing led to another, and here we are today.”

The zoo has lions, tigers, white Siberian tigers, a cougar, leopard, bears, wolves, raccoons, alpacas and fainting goats, among many other animals.

The biggest attraction right now, though, is probably the opportunity to hold an 8-week-old tiger cub. That may seem like a once-in-a-lifetime event, but it actually happens fairly often at Brown’s Oakridge Zoo.

“I can’t say how often we’ll have a cub for people to hold since that depends on Mother Nature,” Brown said. “One year we had five lion cubs born here, two tigers, three cougars and a leopard. That was a bonus year.”

Over the years, the Browns have raised more than 150 lion, tiger and other cubs that were abandoned in captivity.” Allowing the public to hold and pet them educates people about the animals and also helps the cubs not be as afraid of humans,” Brown said.

“We have a waiting list for our cubs because they always have good temperaments,” she added.

The newest cub, named Nadia, is a rescue from another facility. While the Browns often place animals they’ve raised in other zoos and facilities across the United States, Brown said they may keep Nadia but would need to raise the money to build her a pen. She will live in their house at least through the fall and will be available for the public to hold for several more weeks.

“Federal law states that after they are 12 weeks of age, the general public cannot have hands-on contact with them,” Brown said. “It’s also based on their disposition, but she’s very sweet and likes to snuggle.”

Zoo admission is $6 for adults and $3 for children ages 3 to 12, with children under 2 free. An added optional fee of $5 per picture of the cub with your camera or $20 for unlimited photos per camera raises funds that go directly to the cub’s care. The zoo is open 10 a.m. to 4 p.m. Monday through Saturday and 12 p.m. to 4 p.m. Sundays through Labor Day and weekends only after Labor Day.

The Browns also provide educational programs in the community at schools, libraries and nursing homes, with all fees from those programs going back into feeding and caring for the animals.

Donations of food, building materials, towels and other items are accepted. For more information about the zoo, visit the website www.brownsoakridgezoo.com or call (309) 783-2112.