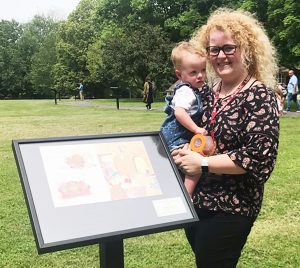 Peoria Public Library reference assistant Gwen Ayler holds her daughter, Harper, next to one of 20 pedestals that make up a new StoryWalk that she and co-worker Katy Bauml helped bring to Columbia Park adjacent to the library’s McClure Branch. (Photo courtesy of the Peoria Public Library)

Taking the kids for a walk through Columbia Park now has both physical and literary benefits, thanks to a new partnership between the Peoria Public Library and the Peoria

A new permanent StoryWalk installation was unveiled earlier this month in the park, which is located next to the library district’s McClure Branch at 315 W. McClure. StoryWalk is a national project created by Anne Ferguson of Montpelier, Vt., and developed in collaboration with the Kellogg-Hubbard Library.

The new StoryWalk consists of a progression of picture book pages mounted on 20 weatherproof pedestals along the sidewalk. The books will be changed about every two weeks, particularly in the warmer months. The installation took about two years to create after two librarians each discovered the idea individually.

“Katy Bauml at Lakeview (Branch) and I both came across the idea separately, and we’re still not 100 percent sure if we saw it in a library journal or a Facebook group that’s dedicated to library programs,” said McClure Branch reference assistant Gwen Ayler. “We brought it to each other about two-and-a-half years ago in January 2017.”

After getting approval from the Peoria Public Library’s Board of Trustees to move forward with the idea, the librarians and the board’s community relations committee then got the OK from the Peoria Park District to place the book pedestals in Columbia Park.

“Columbia Park is right next door to the library,” Ayers said. “The drive that runs behind our library for people to exit the parking lot is the only thing between us. I can look out my window and see all the families walking along the StoryWalk.”

The last piece of the puzzle needed to get the project installed in Peoria was funding. “Library board member Barbara Van Auken kind of took the lead on that and got us all kinds of people who could fund it for us,” Ayers said. 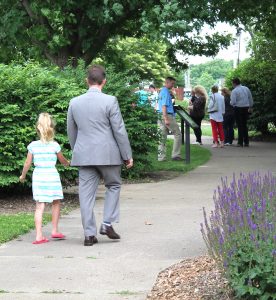 Each post is individually sponsored by either a person, a group of people or a business. “In some cases, multiple family members sponsored one in memory of a loved one. City Council members also did one, the mayor has one, library board members have one,” Ayers noted.

“We also had a flyer that went out, and we took up a collection among (library) staff to sponsor one, so it was just a lot of different directions we went in to try to get people to sponsor,” she added.

Total cost of the project was about $8,500, with sponsorship of each post being $425. The posts were purchased from Barking Dog Exhibits. Other costs included installing the posts, purchasing books and laminating pages.

The laminated pages of the book are divided among the posts and placed under sturdy plexiglass covers.

“We chose the number of posts based on an average number that picture books typically are, so that’s how we came up with that number of 20. It kind of allows for a wide range of books,” Ayers said.

The first book, “Bunny’s Book Club” by Annie Silvestro, only took up 17 posts, so the last three posts were filled with information about upcoming library programs. “A Hippy-Hoppy Toad” by Peggy Archer was installed June 19 and will be the StoryWalk book through July 3.

When choosing books for future installation, Ayers said she and Bauml take into account the size and length of the book. “We also try to decide how many words people will want to read per page. We don’t want them sitting there reading a novel, but we also don’t want them to only read a few words on a page,” she said.

Plans call for changing the book every two weeks, at least through the summer. “We hope to do that in the winter, too, but it will kind of depend on the weather. I’m sure we will adjust as we get there,” Ayers said. “We have some fall-themed books chosen already and some winter ones, as well.”

The books are geared toward kids in pre-kindergarten through third grade, but StoryWalk is intended for all ages. The posts are set at an angle so younger children can see them. 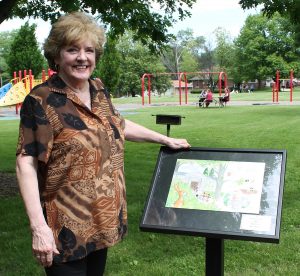 Peoria Public Library Board member and community relations committee chair Barbara Van Auken stands next to one of the new StoryWalk posts that she sponsored. StoryWalk is a progression of picture book pages mounted on weatherproof posts in Columbia Park. (photo courtesy of the Peoria Public Library)

“We’ve had older members of the community come in the library who have said how much they love it and and how it’s such a great thing to bring to this community,” Ayers said.

StoryWalk is open for people to walk through at their own pace, but for those who like participating in groups, the McClure Branch will host an hour-long strolling story time and picnic at 11:30 a.m. July 3 and July 17.

“We’ll walk around and read the story and possibly do some songs. People are invited to bring a lunch to eat afterwards, and we’ll provide water and juice boxes,” Ayers said. “I’ll also have toys, chalk, Hula Hoops and jump ropes out there so kids can have fun in the park afterwards.”

The strolling story time will move indoors in inclement weather.

The Peoria StoryWalk joins others that have popped up in all 50 states and 12 foreign countries since Ferguson created the idea more than 10 years ago, according to the website

Ayers said longterm plans are to bring StoryWalk to other locations in Peoria. “We’re hoping with these positive results that we’ll be able do more at other libraries. We’ve talked to the park district about different spots, and there are also talks going on with Peoria Public Schools about maybe putting one near one of the schools,” she noted. “We want to see  how many partnerships with the community we can make.”