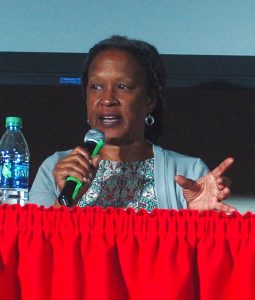 Lecia Brooks, outreach director for the Southern Poverty Law Center, addresses a large crowd last week at Bradley University as the keynote speaker at a public forum on the rise of hate groups and hate crime. WIth Brooks is Imam Burhan Hamdan of the Islamic Center of Peoria, one of four local panelists for the event. (Photo by Elise Zwicky / for Chronicle Media)

A large crowd ranging in age from college students to senior citizens packed the ballroom at Bradley University’s Bob Michel Student Center last week for a public forum on how to combat the rise in hate groups and hate crime around the country.

The event was organized in January but was particularly timely in the aftermath of a violent clash last  month at the University of Virginia in Charlottesville between a rally of white supremacists and neo-Nazis and counter-protesters that left a 32-year-old protester dead.

“We’re experiencing an uptick in the number of hate crime-related incidents that are happening in the country,” said keynote speaker Lecia Brooks, outreach director for the Southern Poverty Law Center. “The fact that neo-Nazis and white supremacists are openly walking on the campus of the University of Virginia without, apparently, any shame at all really shocks the conscience.”

The nonprofit Southern Poverty Law Center was founded in 1971 to fulfill the promises of the civil rights movement. It focuses on combating hate, teaching tolerance, protecting the rights of children and seeking justice.

The forum also brought together a panel of community leaders, including the Rev. Marvin Hightower, president of the Peoria Branch of the NAACP; Imam Burhan Hamdan of the Islamic Center of Peoria; Rebecca Carlson with the Jewish Federation of Peoria; and Sonny Garcia, a local activist and member of the Illinois People’s Action group.

“It’s important to recognize that hate groups do exist. The primary reason is the demographic shifts we’re seeing in the United States,” Brooks said. “By 2050, white will no longer be in the majority. It will be 49 percent white and 51 percent people of color.”

Brooks said the threat of becoming a minority has morphed into a false narrative of white genocide.

“No one is being displaced. It’s just a natural progression for a country that chose to be a melting pot,” she said.

The 2016 presidential campaign and election, which Brooks characterized as “one of the most awful times in our history,” emboldened people on the far right, she said.

“Donald Trump didn’t create hate. It was already there. But he normalized it, if you will, to say these ugly things and energized this ugly part of our society,” Brooks said.

“I would remind people here that not too long ago you had a very notorious white supremacist in your midst,” Brooks said, referring to East Peoria native Matt Hale, who is serving a 40-year sentence for soliciting an undercover FBI informant to kill a federal judge.

“I present all this to you with the hope that something will prick your conscience and you will choose to do something,” Brooks said. “This is a real issue and real lives are at stake. Our country’s at stake.”

The Southern Poverty Law Center has several free publications available on its website at www.splcenter.org with suggestions on how to combat hate, including guides for students and teachers.

Among the tips are to join together with community leaders and faith leaders to take a stand, speak up in ways that draw attention away from hate, educate yourself, pressure elected officials to stand up against the hate, teach acceptance and look inside yourself for biases and stereotypes.

Noting that hate speech is protected by the first amendment, Brooks said, “You can’t deny (alt-right) speakers the right to come (to a college campus). What we have to do is be smart and strategic. You can ignore them and set up your own peaceful protest.”

In closing remarks, panelist Sonny Garcia said, “I’ve been physically attacked for my beliefs, but I still hold true to Mahatma Ghandi’s ideology of nonviolence and love your neighbor.  I hope we can all continue to do that despite the heavy rhetoric that’s going on in this country and the hatred that’s reared its ugly head.”

from their horrific experiences with a deep commitment to treat everyone with respect, especially  members of minority groups.

“They knew what it felt like to be hated, and they were determined that we would not hate others, particularly in this country that welcomed them as immigrants,” she said.  “Anti-hate work is life-work, both interpersonal and intrapersonal. Looking within for hidden prejudices and misconceptions is as important as reaching out,” she said.

The Rev. Marvin Hightower told the crowd, “Education, agitation, litigation, mobilization and voter participation are key to achieve our goals.”

Imam Burhan Hamdan stressed the importance of checking facts, data and sources before responding emotionally. “It starts with respect,” he said. “Treat others the way you want to be treated.”

Lorene King, a retired academic advisor for ICC and the University of Illinois College of Medicine at Peoria, said she attended the forum as a lifelong learner with a personal interest in the topic.

“I was in the civil rights movement in the ’60s and ’70s. I was with the group of people from Peoria who marched on Washington, D.C., in 1963,” King said. “We are absolutely sliding backward now. The more things change, the more they stay the same.”