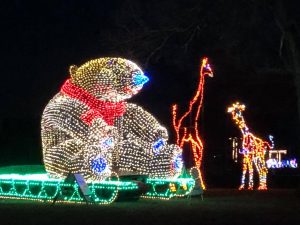 If weather permits, on Nov. 16, at 5:45 p.m., the annual Parade of Lights will glide along its usual path, which begins at the intersection of East Washington Street and Dolans Lane in East Peoria. (Photo courtesy of East Peoria Festival of Lights)

Thirty-five years ago, when the city of East Peoria held a summertime centennial celebration, so many volunteers turned out that the city and its merchants to continue the spirit of volunteerism into the winter, and the festival of lights was born.

The festival’s original budget was a meager $5,000.

“We wore tie-dyed green underwear in the parade, and the floats were all built in the firehouses,” said Parade of Lights coordinator John Broshears. “The merchants had seen something like this, and thought it would be a good idea.”

In 1984, Broshears was on the fire department and helped build the floats. Now he helps take care of them, and said big plans are in play for the parade and the display which involve rewiring the entire park and replacing all the old cars that tow the floats through town.

“Those cars were destroyed when we got them. We got rid of eight cars last year, and we’ll be getting rid of the rest this year,” he said. “We’re also doing a major upgrade of the whole park and the displays will only run when the park’s open, then they’ll shut down by timer, which will save a considerable amount of money and time.”

Over time, floats have been added to the parade. Most recently, a 54-foot-long Santa and sleigh, fit with presents and reindeer. However, the parade maintains its original lineup. For those who were very young when they first watched the parade, seeing the same floats that bedazzled them as children certainly brings about a strong nostalgia.

Not seen since 2004, the famous Budweiser Clydesdale draft horse team will return this year, weather permitting, and follow the traditional parade marshal, Folepi.

For those who may not know, Folepi is an acronym for “Festival of Lights East Peoria Illinois.” 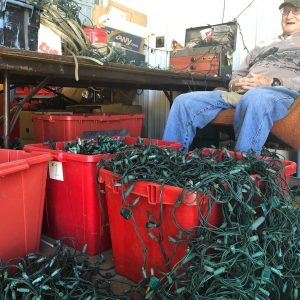 Every light on the displays is rechecked each year. Festival of Lights volunteer Virgil Hauk takes a break from checking light strings for bad bulbs. If you want to help with the floats, email at folepi@cityofeastpeoria.com. (Photo courtesy of East Peoria Festival of Lights)

“For the first time in 14 years, we’re going to have the Clydesdales. We’re pretty thrilled to have them back,” Doug McCarty, City of East Peoria Director of Tourism and Special Events said, with a word of caution about the weather. “Every year the parade is depending on weather, and the past few years we’ve had colder, windy, rainy weather. Hopefully this year’s will be better.”

One last turn, to the right onto Taylor Street brings the parade to its end at Central Junior High School.

Later, they’ll be taken up Springfield Road to 3 Par Lane to be laid out for the Winter Wonderland display. It opens Nov. 22, ends Dec. 31, and the price is still $10 per vehicle. The time has changed for the New Year’s Eve Get Lit fun run. It starts at 9 p.m., instead of 11:50 p.m., to make the event more family friendly.

The Find Folepi Ornament Hunt begins Nov. 20. Clues to the whereabouts of the 3-inch, round Folepi ornament will be issued weekly. Whoever finds it will win a package of prizes from local businesses.

Individuals may also win a Folepi ornament if their home is chosen as a winner in the Christmas Splendor Contest. The most festive homes and neighborhoods take the prizes, and the East Peoria Beautification Commission, which runs the contest, suggests entrants should go overboard and be excessive with decorations. 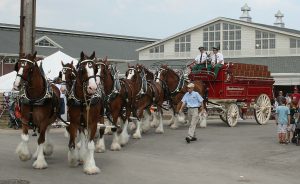 It’s been 15 years since the famous Budweiser Clydesdales graced the streets of East Peoria during the annual Parade of Lights. On Nov. 16, the majestic draft horses will follow the traditional parade marshal, Folepi. Photos with the Clydesdale team will be available at a date to be announced by parade organizers. (Photo courtesy of Anheuser-Busch Brewing Co.)