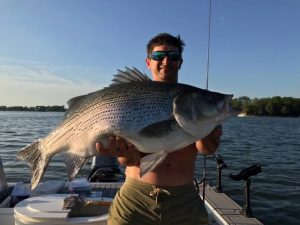 On June 12, Robert Vericella broke the state record for hybrid striped bass by reeling in a 21 pound, 7.2 ounce goliath. The previous record, a 20 pound, 7.2 ounce bass, was caught in 1993 at Lake of Egypt in southern Illinois. Vericella is from Bloomington and was fishing at Lake Bloomington.

It’s Illinois’ year of the Big Fish and to date, nearly seven records have been set or broken in 2017, and the best of the fishing season is hardly finished.

It’s enough to make some wonder if a magic fish whistle was finally invented.

At first, it was thought that Terry Livingston Sr. beat the state tiger muskie record with a 36-pounder he reeled in from Goose Lake subdivision in Grundy County. DNA tests later concluded the fish was a true musky, not a hybrid, and the 2002 musky record of 38 pounds, 8 ounces still stands.

Six others, however, set a new mark. In March, James Zimmerman of Beloit, Wis. caught a 15-pound, 8-ounce walleye while fishing on the Pecatonica River in Winnebago County.

Any fish you wish

Since there is no such thing as a fish whistle, veteran fisherman, Larry Dozard said it’s best to know the seasonal habits of each species, where to find them and the condition of each fishing spot. 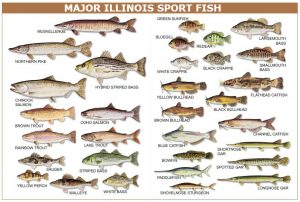 Dozard founded the website, Larry’s Fishing Hole; a go-to site for news, events and advice on all things fishing in central Illinois.

“You learn to pattern and rotate through them. Crappie, bluegill in the spring. Bass and catfish in the summer months. Later, in fall muskie, walleye,” he said. “But you can catch any fish at almost any time. There’s always something that’s biting.”

What fish go for can be somewhat of a debate, though there’s a standard bait for most fish. Catfish like fresh, strong-smelling morsels of shad, earthworms and, even, chicken livers. Bass, crappie and bluegill are generally attracted to the motion of a lure, as are muskie, pike and walleye. Lures are engineered specifically for each species.

But fish don’t always follow tradition, and many a fish tale begins with a break from the norm. Povolish caught his record-setting black crappie with a combination of bass lures. And it’s always possible under any circumstances, Dozard said, to snare a fish in passing.

“If you want to target a fish, study their habits and habitats. Learn about the fish; what they do in spring, summer, what they eat, do a little research and go out and start using those patterns and representations,” Dozard said. “Bass are very popular, that’s the biggie as far as sports fish, they jump and fight, they’re a lot of fun.”

So, where are the areas fishing hot spots? Central Illinois is peppered with private lakes and ponds, where, if you own one, or know someone who does, then you’re fortunate. There are, however, a number of popular public fishing areas. 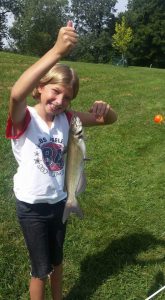 Many local fishing areas, such as Eureka Lake and Lake Bloomington, attract families with children due to the ease of accessibility and high populations of blue gill, crappie and catfish. Josie Eaton, 11, caught this catfish while fishing the small lakes at McNaughton Park in Pekin. (Photo courtesy of Holly Eitenmiller / for Chronicle Media)

At Tazewell County’s Spring Lake Fish and Wildlife Area in Manito, there’s an abundance of underwater brush, which attracts the “panfish species.”

At its north end of the lake there’s muskie, on the south end there’s northern pike. Mike Danner of East Peoria frequently fishes at Spring Lake and said he brings home “buckets of pan fish.”

Banner Marsh State Fish and Wildlife Area in Peoria County has “a little bit of everything,” and features a children’s fishing area stocked with bluegill.

Like Peoria County, Woodford County is bounded on one side by the Illinois River, and offers mostly river fishing, along with a number of popular backwater fish areas.

Eureka Lake does allow fishing, but is known to host smaller fish, and is a popular fishing spot for families with smaller children.

“It’s fun to take pack up some lawn chairs and bug spray and take the kids fishing at Eureka Lake. It’s beautiful there, and peaceful,” Inez Matthews, of Washington said. “My son, he’s 5, and he caught his first fish there this year.”

For many in central Illinois, two fishing holes in McLean County seem to be most popular; Evergreen Lake and Lake Bloomington, where Vericella hooked the record bass.

McLean County is about a 45-minute drive from the Peoria area, a comfortable distance for a lazy day of fishing.

Checking out the big waters

But for those venturing for the first time to further waters, such as Lake Michigan or the popular lakes of southern Illinois, Dozard says, “Get a guide.” 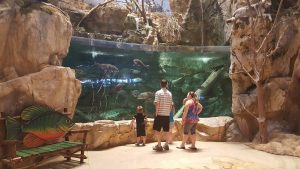 After catching a record-setting 4.5-pound Black Crappie hybrid at Kinkaid Lake in May, Ryan Povolish and Bass Pro Shops obtained special permission from the Illinois Department of Natural Resources to have the fish tanked. The southern Illinois female crappie now resides in an 18,000-gallon tank at the Bass Pro Shops’ East Peoria location, along with a number of other impressive fresh water fish. (Photo courtesy of Holly Eitenmiller / for Chronicle Media)

“A lot of people don’t want to get an expert, but you can’t learn that fast on a limited amount of time,” he said. “They don’t mind sharing their ideas and knowledge, then you repeat what you learn. You don’t want to spend most of your time figuring the fish out on your own, and the last hour of your trip finally catching fish.”

Most importantly, know the quality of the water. The Illinois Environmental Protection Agency maintains a list of 100 locations in Illinois that carry a fish advisory. These advisories feature which species of fish may be eaten or not, and how often they may be consumed.

Powerton Lake and the Illinois River, along with its tributaries, have PCB warnings; that mix of chemicals is known to cause cancer, and most of the fish should not be eaten more than once a week. Others, such as Lake Michigan, also carry mercury warnings.

For more information on water contaminates, visit www.dph.illinois.gov and search for “fish advisory map.” To learn more about state fisheries; their locations and regulations, visit IDNR’s website at www.dnr.illinois.gov.

And, of course, to keep up with the latest fishing events, tutorials, reports and news in central Illinois, visit Dozard’s site, www.larrysfishinghole.com, where Dozard wishes “you and your family a safe and good fishing season.”

— Illinois anglers having a big year at the fishin’ hole —