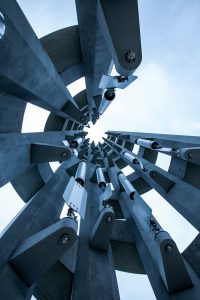 Eight of 40 wind chimes have been installed in the Flight 93 Tower of Voices monument while the project team, including local music manufacturer Brett Fugate, works on modifying certain elements of what has been described as the world’s largest musical instrument. (Photo by Fred Zwicky)

Nearly a year after the dedication of the Flight 93 Tower of Voices monument in Pennsylvania, modifications are still being made to the tower’s unique wind chimes that were built by a local musical instrument manufacturer.

Brett Fugate, whose Morton-based company Fugate, Inc., makes percussion, wind and brass instruments, spent most of last year building 40 large wind chimes to represent the voices of the 40 passengers and crew who died trying to thwart the terrorist hijacking of United Flight 93 on Sept. 11, 2001.

Only eight of the wind chimes, which range from 5 to 10 feet in length, have been installed so far in the 93-foot tall Tower of Voices monument that was dedicated at the Flight 93 National Memorial last September near Shanksville, Pennsylvania.

The Tower of Voices sits at the entrance to the Flight 93 National Memorial, which is located on the site where the plane crashed that day. The plane was one of four hijacked by terrorists that morning, with its intended target believed to have been the U.S. Capitol in Washington, D.C.  The other three plans crashed into the World Trade Center in New York City and the Pentagon in Arlington County, Va.

“Initially, the goal was to have all 40 chimes suspended and working by last year.    However, this is a one-of-a-kind project incorporating several coupled systems. The project team did a performance analysis and determined that there were some elements that needed modification,” said Sally Mayberry, a National Park Service public affairs specialist.

Fugate said the team is analyzing the influence on motion by the internal components of the chime assembly. “The components of all 40 assemblies are completed in accordance with the design of the eight chimes that are currently in the Tower of Voices.

However, performance-enhancing retrofits of the 40 chime tube assemblies are currently in progress. Once the proper design has been identified, adjustments will be made on those eight chimes and the additional 32 chimes will be installed to provide the full set of 40 chimes,” he explained.

While the eight chimes have remained in the Tower of Voices, they are currently tethered to restrict their movement while the project is being modified.

It’s not yet known when the work will be finished, but Mayberry said the chimes won’t be ready in time for this year’s 9/11 ceremony at the Flight 93 National Memorial.

“This is a one-of-a-kind project that we want to make sure appropriately honors each of the passengers and crew members,” she noted. “So, while our goal is to accomplish that swiftly, we’re more concerned that the project is done properly.”

Fugate said time has been the most challenging aspect of the project. “Many musical instruments have taken decades, if not centuries, to develop and perfect to the current state of the art,” he said. “The Tower of Voices team is doing this in a comparatively short amount of time. We just ask for the country’s patience in this effort. 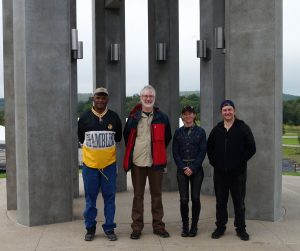 The team from Morton-based Fugate, Inc., who are working on the 40 wind chimes in the Flight 93 Tower of Voices, stand in front of the monument at its dedication in Pennsylvania last September. From left are Bert Durr, Chris Arnold, Carly Todd and company owner Brett Fugate. (Photo courtesy of Brett Fugate)

“Remember, this will be the greatest musical instrument in the world with an ultimate goal of giving the heroes of Flight 93 a voice for generations to come,” he added.

The chimes were first heard at last year’s dedication when family members of some of the passengers and crew pulled ropes that were connected to the eight tubes.

“The dedication ceremony was on a cold and rainy day. It was as if the angels were weeping for this moment,” said Fugate, who attended the ceremony with his then-12-year-old daughter, Melodi, and three employees who have worked on the chimes.

Fugate said the chimes are in tune and sound fine, but the team is working to streamline the design. “The new design that we have will be much more aerodynamic. We expect the sound to be more intense and more focused,” he explained. “We’re really trying to make the best possible musical instrument that we can.”

Katie Cordek, public information officer for the Flight 93 National Memorial, said some visitors are disappointed to learn the chimes aren’t currently ringing. “But when we explain what’s going on with the tower, there is overwhelmingly an understanding that the population has,” she said.

“A lot of people think it’s bells that chime on a timed sequence. When we explain to them that it’s wind chimes, they’re more excited, especially when we explain the symbolism behind it representing the 40 passengers and crew and their voices,” she added.

According to the Flight 93 National Memorial website, after hijackers forced the passengers and crew to the back of the plane, 13 people made 37 phone calls on Airfones from the seat backs. Through those calls, they learned that Flight 93 was part of a larger attack on America, which led to a vote and a collective decision to fight back. 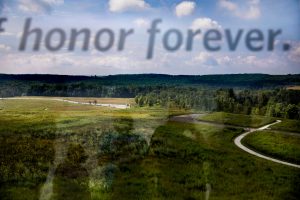 The view through a window in the Visitors Center at the Flight 93 National Memorial in Somerset County, Pa., shows the flight path and crash site of United Flight 93, which was one of four planes hijacked by terrorists on Sept. 11, 2001. Visitors can walk along the crash site to the Memorial Plaza, where a Wall of Names honors the flight’s 40 passengers and crew. (Photo by Fred Zwicky)

Recordings of some of the calls can be heard in the memorial’s Visitors Center, where the public can also view a chronological display of the day’s events along with artifacts from the crash and information about the flight and the passengers and crew.

Outside the Visitors Center, a black granite walkway paves the flight path with time stamps of the other three planes of 9/11 engraved in the walkway. At the end of the walkway, visitors can stand at the overlook to view the Memorial Plaza, Wall of Names and the crash site.

The 18th annual 9/11 observance will begin this year at 9:45 a.m. on Sept. 11 at the Flight 93 Memorial Plaza. At 10:03 a.m.–the moment Flight 93 crashed—the names of the passengers and crew will be read and the Bells of Remembrance will be rung in their memory. A wreath will be placed at the Wall of Names.