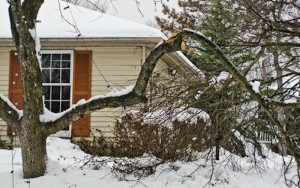 If you have tree damage from winter storms, first assess the damage and evaluate safety. Some pruning work may need professional care, according to horticulture experts at the University of Illinois Extension Offices. (Photo courtesy UMD Extension)

“This crazy, but typical winter weather has left homeowners with broken limbs cluttering the ground and trees in distress,” states University of Illinois Extension Horticulture Educator, Kelly Allsup. Ice on trees results in weight accumulation of hundreds of pounds and can result in branch failure.

Usually these are branches that have weak angles, included bark, have been improperly pruned or are on neglected trees.

Weak branch angles are less than 90 degrees from the trunk. Included bark means that some of the bark is within the angle of the limb. Some trees also are prone to bad branch angles, like Siberian elm, silver maple, river birch, honey locust, hackberry and the notorious ornamental pear.

If you have tree damage, the first task is to assess the damage and evaluate safety. Severe splitting of the main trunk, really large limb loss or major stripping of bark could necessitate tree removal. Other minor damage can be repaired immediately by the homeowner.

It is important to never leave stubs when repairing storm-damaged trees because stubs are prone to decay and encourage insect infestation. If the limb is less than three inches, a simple pair of garden pruners can be used. If the limb is greater, use a saw and the three-cut method should be used. The three-cut method allows the proper cut without causing more damage. The first cut is about an inch from the final cut from the bottom up about half way. This cut will prevent the bark from ripping from the tree when cut from tree. The second cut from above will remove the limb. The final cut is made close to the start of the branch while retaining the branch collar and the branch bark ridge.

If the bark is damaged, use a knife to remove the ragged edges without enlarging the wound. It is no longer recommended to dress wounds.

If there is ice on the limbs, do not shake it off. This can actually cause more breakage than if ice is left on.

Do not do more than repair pruning at this point. If you want to prune trees it is best to do so when trees are fully dormant in January and February. It is best to do minimal pruning each year rather than drastic pruning. If you are unsure about pruning, call a certified arborist.

Allsup encourages homeowners to keep in mind some of the tree pruning basics. Pruning should be done at the appropriate time of year with the right tools and have a purpose. Most pruning of landscape trees is done to improve structure, safety and aesthetic value of the tree. The proper pruning practice can increase floral displays or fruit load, prevent breakage and ultimately lengthen the life of the tree. A well-pruned tree can be worth thousands of dollars in the landscape.

Times to prune deciduous trees are while they are in full dormancy and in Illinois that is February or March. Any time before that they are not fully dormant and may produce new shoots and will get killed from future frosts. Any time during the growing season, pruning cuts will be an avenue for disease and insect infestations.

Most pruning of young trees should be done two to three years after planting. According the University of Florida, a tree should be pruned at least seven times in the first 25 years.

Established trees may be too large to safely prune and should be left to a professional arborist. Homeowners should not prune trees on roadways or under power lines.

A good pruning tool kit would include a good pair of by-pass pruners, hand saw and loppers with handles. The handsaw will be useful for large branches and the by-pass pruners are ideal for smaller branches and cleaning up wounds. Pruning tools should be kept sharp and clean. Jagged cuts will not heal properly and be a source of decay.