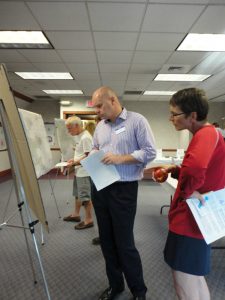 It’s true; most motorists cast a heavy sigh at the sight of a bicycler pedaling along the narrow shoulder of a busy road, and wonder, “Why do they have to ride here?”

Chances are it’s because cyclists have no other choice.

The  Tri-County Regional Planning Commission is trying to change that.

On Oct. 5 at Peoria’s Gateway Building, the commission hosted an open house for BikeConnect HOI, a TCRPC regional bicycle plan for the Greater Peoria area. There, the public voted on recommended bicycle network improvements to connect communities in the region; and recommend action items for strengthening bike transportation.

Currently, 17 improvements are planned and 36 are in concept stage. Many are Peoria County projects, which include shared use paths, widened shoulders and additional bike lanes.

Most bike trails in Woodford, Tazewell and Peoria counties lack safe conjunctions, and often terminate at hazardous locations, such as narrow shoulders hemmed in by steep ditches on high-traffic roads.

The trip from home to work and back is “treacherous,” according to Dunlap resident Rose Power. Power is employed by Illinois Central College, and cycles to the downtown campus as well as the East Peoria campus almost daily.

Tazewell and Woodford counties share the same woes. Village of Metamora Mayor Ken Maurer and his wife Sue attended the event to vote on which changes may be most beneficial to Woodford County.

“We have very good bike trails in town, but we want a way to get from Germantown Hills to Metamora,” Maurer said. “It could be possible to take Santa Fe Trail to Metamora Blacktop.”

Pekin Mayor John McCabe attended the event and said his focus for Tazewell County is to connect Pekin safely with East Peoria through road improvements, such as widened shoulders. 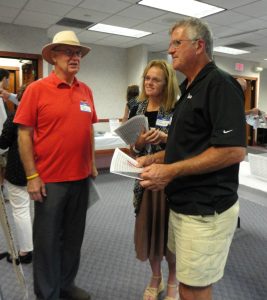 Life-long cycling enthusiast, Sam Glick of Pekin said a dangerous point in Tazewell County lies at the foot of the Main Street hill in East Peoria.

“For us, you can work your way along through Pekin and North Pekin to Wesley Road,  but it dumps you out on a busy four-lane road, maybe a mile away from connector trails,” Glick said.

TCRPC senior planner Nick Hayward was pleased with the turnout at the open house, and said the results will first be employed to make changes to the trail network improvements before the TCRPC steering committee finalizes its plan at the end of this year.

“We’re also working to develop a model ordinance to promote bicycle accommodations that local municipalities could adapt and adopt,” Hayward said. “Peoria has that in place. It’s called the Complete Streets ordinance.”

As defined in the ordinance, “‘Complete streets’ means streets that are designed and operated to enable safe access for all users, in that pedestrians, bicyclists, motorists and public transportation users of all ages and abilities are able to safely move along and across a street.” 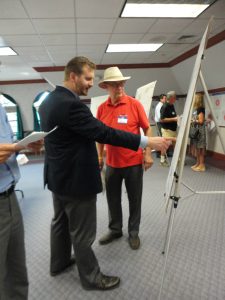 The ordinance also provides “a safe, reliable, efficient, integrated and connected multimodal transportation system that will promote access, mobility and health for all users.”

“The open house was a great opportunity for people to get together and give us their input on what projects are most important to them,” Hayward said.

Of the Possible Network Improvements, the top three vote-getters were the Rock Island Greenway in Peoria Heights, McCluggage Bridge improvements, as well as improvements to Illinois Rte. 116.

Most planned projects have time frames of five to 10 years, while concept improvements are under consideration, but not yet planned. Many fall under the jurisdiction of the Illinois Department of Transportation.