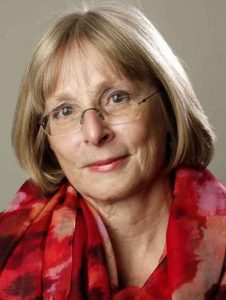 In the face of constitutionally questionable policy proposals under President Trump’s administration, the American Civil Liberties Union of Illinois has taken to the road, lending an ear to the concerns of Illinois citizens.

ACLU of Illinois Executive Director Colleen Connell was at the Grand Army of the Republic Hall in Peoria on Nov. 15,  the third leg of the ACLU’s We the People Listening Tour.

“What’s emerged,” said Connell of previous stops in Springfield and Champaign, “is concerns about immigration, particularly Dreamers and what’s going to happen with DACA  Jan. 31.”

Dreamers are undocumented immigrants who arrived in the U.S. as children and have assimilated to American culture.  In September, Trump ordered the cancellation of The Deferred Action Childhood Arrivals program, which may render roughly 700,000 people eligible for deportation in 2018.

“Another big issue is women’s reproductive rights and LGBT rights,” Connell continued. “It’s been great so far and we’re pleased with the turnout and inspired by people’s concerns with the (United States) Constitution.”

Around 100 people gathered at the GAR Hall, where Peoria ACLU volunteers handed out sheets of blue and red stickers with which to vote on various issues posted on posters around the room.

Among the six concerns listed on the posters were “Police Practices” and “Women’s Reproductive Rights.” On Sept. 28, Illinois Gov. Bruce Rauner signed off on House Bill 40, which expanded state-funded abortions and prevents the criminalization of abortion if the US Supreme Court overturns Roe v Wade. 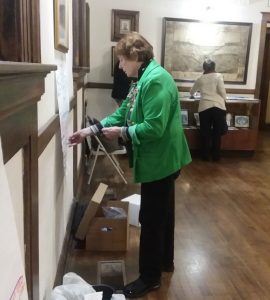 ACLU volunteer Elaine Hopkins votes on topics of interest posted about the Grand Army of the Republic Hall on Hamilton Blvd. Nov. 15. ACLU of Illinois Executive Director Collen K. Connell was in Peoria for the organization’s ACLU We the People Listening Tour to address concerns regarding civil liberties. (Photo by Holly Eitenmiller / for Chronicle Media)

Subsequently, McLean County began offering medical abortions in October at the Bloomington Planned Parenthood office. Connell will visit Bloomington Nov. 29 at the Chateau Bloomington Hotel for the final stop of this year’s tour.

“We’re working harder at the state level to use state law to protect our rights,” she said Wednesday evening. “They passed HB 40, it affirmatively restored Medicaid funding for abortions, not just abortions to protect a woman’s life … all abortions.”

Another matter of women’s health, forced cesarean sections, was brought to the forefront when an audience member brought up the issue and referenced the documentary, “The Business of Being Born”, which examines the American healthcare system and its approach to births.

“A doctor shouldn’t force a woman to have a c-section. People decline medical care all the time, it’s your right to do so,” Connell answered. “The ACLU has intervened in C-sections and healthy children were born vaginally.”

Conversely, the problem with inadequate health care in the Illinois prison system is another egregious concern for some people with the ACLU.  Inmates in Illinois’ overcrowded prisons are provided inadequate care by a private agency that can’t afford provide proper medical treatment.

“We incarcerate too many people in our prison system. The state department of corrections was built to hold 30,000 people. There are 46-48,000 people. We’re at 150 percent capacity,” Connell said. “The state has outsourced prison healthcare to a private provider, Wexford, and this is what I think is very problematic. We should be turning a profit on incarcerating that many people. The only way Wexford can make money on this is if they either provide less care, or they get paid.” 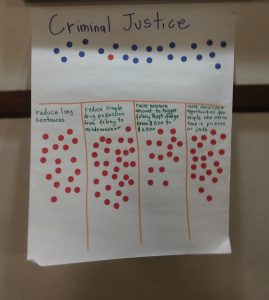 “Criminal Justice” was among seven concerns posted on the walls of the GAR Hall in Peoria on Nov. 15 during the American Civil Liberties of Illinois listening tour. Among the other civil liberties issues were “Police Practices” and “Women’s Reproductive Rights.” Guests voted on their highest concerns with color-coded dots. (Photo by Holly Eitenmiller / for Chronicle Media)

Illinois budget woes have contributed to the problem, but Connell said issues with overcrowded prisons and insufficient health care existed before the state’s budget crisis.

Recently, a class action lawsuit filed on behalf of all Illinois prisoners, Lippert v. Baldwin, is alleging Illinois’ medical plan puts them “at risk of pain, injury and death”.

“A large part of that is we incarcerate too many black and brown people, and too many people overall for drug crimes,” Connell said. “Anything from gun violence to shoplifting; our answer is to lock them up, particularly if they are people of color.”

This year, Peoria ranked second in an annual 24/7 Wall St. report on The Worst Cities for Black Americans. Last year, it was first. The report was mentioned by an audience member who voiced concerns about fair housing in Peoria. Others had grievances with local police and its use of excessive force toward African Americans.

“If people have legal question about their own personal situation, and it’s something the ACLU might be able to help with, don’t air it in public because it can be discovered by law enforcement,” she advised. “It doesn’t mean we’re not interested. We caution everybody to email one of our attorneys.”

In 2014, the Peoria home of Johnathan Daniel was raided by local police in response to a fake Twitter account he launched under the guise of Peoria Mayor Jim Ardis.

After Ardis initiated the raid, the ACLU filed suit on behalf of Daniel in what became known in Peoria as “Twittergate”. A year later, the city of Peoria agreed to pay Daniel $125,000, and settled the suit.

“Police and excessive force is an issue of grave concern, and it can be mitigated by training,” Connell said. “Two years without a budget has had an impact, but we can’t skimp on training. Chicago has paid $500 million in damages due to excessive force.”

Though the ACLU does not provide general legal services, it does litigate civil rights cases. Information is available at their website, www.aclu-il.org. It also provides people with information about civil liberties, such as wallet-sized cards explaining immigration and civil rights, and how to handily manage confrontation with police and officials.

Volunteers on Nov. 15 also handed out pocket-sized copies of The Constitution of the United States of America, which includes an addendum on police encounters.

Connell has one final stop in 2017, Bloomington-Normal on Nov. 29, but said the ACLU of Illinois plans to continue its Listening Tour in 2018, to address ongoing concerns with the Trump administration, as well as others.

“My husband keeps saying to me, ‘You cannot sustain this level of outrage for the next four years,” she laughed. “I feel these are times of worry, and we’re working on that and thinking about that and how we can move together to form a more perfect union.”