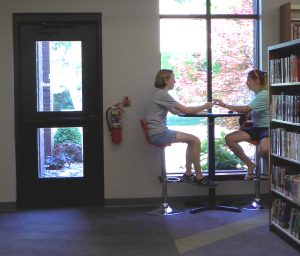 Layne Watson, left, and Mikalah Guzweiller enjoy the first day of summer vacation at Morton Library May 24. Along with an expanded children’s department, the Library Refresh project also included the addition of a tweens and teens area, which is situated next to the entry to Hannah’s Reading Garden, dedicated in 2015 by Dan and Lynne Walters in honor of their granddaughter. (Photo by Holly Eitenmiller / for Chronicle Media)

Like a good book, Morton Public Library has reopened after another chapter was added to its story.

On May 21, the library officially reopened after closing March 25 for the Library Refresh project, which involved a $226,500 modernization of the 9,500-square-foot Pershing Street facility. More than 80,000 books and 17,000 audio-visual items were boxed and stored at by Federal Companies as work was done in a massive reorganization of the library.

In the process, the children’s department was moved to a roomier section at the rear of the building and a tween and teen readers were given their own space.

“We’ve added the dedicated space for tweens and teens, who, for years, have been in the back of the adult section,” Library Director Alissa Williams said. “Now, they have their own space within the library with their reading material, where they have the space to collaborate on school projects.”

The money, Williams said, comes from the library’s reserves, which have accumulated since the building’s previous modernization in 1998.

Along with improved, dedicated spaces, the restrooms were outfitted with new tile floors, the walls were painted and the carpet was removed and replaced. Historical items and collections were moved to a more prominent area of the library, she said, freeing up space for another public meeting room.

“We’ve had quite a great response form people coming back and returning items,” Williams said. “We rearranged the space to create more open and welcoming areas, and people think it really does feel more open. They like having the children’s area in the back.”

Moving the children’s reading department provided 700 square feet of additional space in the main entry area, allowing a prominent viewing space for collections that were once buried within the mazes of bookshelves. 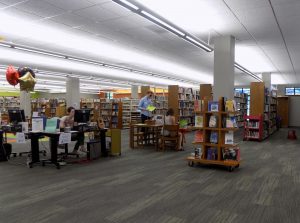 In March, Morton Public Library began its $226,500 Library Refresh project, which involved the removal of 80,000 books and 17,000 audio-visual items. In the process, the children’s department, above, was expanded by its relocation to the rear of the building. The library reopened May 21. (Photo by Holly Eitenmiller / for Chronicle Media)

The Geraldine Rap Carius pottery collection is now on display in what was previously the children’s reading area. Morton Library is situated on the former site of Morton Pottery Works, and many of the pottery pieces on display are well over a century old.

At the center of the library, still being organized, is the Morton History Collection, an area that will showcase the desk of Charles Rice Crandall, a former Morton teacher who passed away in 1906. The collection also includes an assemblage of local items of historical significance which were donated to the library by the Morton Chamber of Commerce in 1998.

“With the historical items moved, we have gained another public meeting room,” Williams said. “The pottery is a big part of Morton’s history, and people can really see it now and appreciate it.”

The reopening occurred right at the start of library’s summer reading programs, which Williams said have continued seamlessly.

As the library underwent its refresh, to minimize the disruption of services, programs such as Friday Toddler Time were maintained in other locations, and staff frequently visited Kroger and other public places to answer questions and provide limited reading materials.

Since Monday, the library has been in full swing, and busy, she said, as people stop in to return items and enjoy the more accommodating atmosphere.

Layne Watson and Mikalah Gutzwiller enjoyed the tweens and teens section on May 24 their first day of summer break.

Both said they often visit the library to work on school projects, look for new reading material and sometimes simply to hang out with each other and their friends. 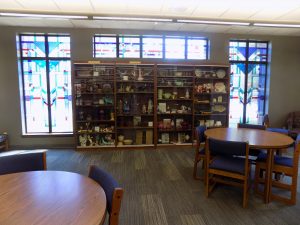 As part of the refresh, the children’s area of Morton Library was relocated to the rear of the building, giving way to 700 square feet of space in the front of the library. Staff may now prominently display collections such as the Geraldine Rapp Carius pottery collection, above, and the Robert “Yogi” and Marsha Salzenstein butterfly collection. (Photo by Holly Eitenmiller / for Chronicle Media)

“It’s great to have people respond in the way they have,” Williams said. “It’s all been very positive, and people were really good about waiting for the Refresh to be complete.”

Morton Library is one of the busiest in Tazewell County and offers an array of services and programs, including online language learning opportunities, a 24/7 digital media library, in-house computer and driver safety courses and a PAWS reading program where children partner with trained therapy dogs and read books.

The library is located at 315 W. Pershing Street, and access to digital material, the library newsletter and a comprehensive calendar of events may be found at www.mortonlibrary.org.