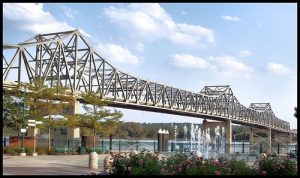 The Murray Baker Bridge that carries Interstate 74 over the Illinois River will be undergoing major work beginning in March. (Photo courtesy of IDOT)

Showcasing the city of Chillicothe’s Bald Eagle Days, the Rotary Club of Chillicothe along with the Lions Club will host its annual Eagle Watch Breakfast serving pancakes and sausage from 7:30 to 10:30 a.m. on Saturday, Feb. 8 at Shore Acres Clubhouse at 100 Park Blvd., Chillicothe.

Along with the breakfast there will be a children’s storyteller, a presentation with live Birds of Prey from Wildlife Prairie Park and the Audubon Society will be on hand with educational materials, spotting scopes and binoculars for wildlife viewing.

The Optimist Club in partnership with the Chillicothe Public Library will hold an “Eagles” & “Life on the Illinois River” photo and art contest.

The contest winners will be announced at the breakfast at 10 a.m. A special dedication of the new Double Eagle Viewer Telescope to Shore Acres Park will be held at 11 a.m.

Tickets for this event are available in advance from the Rotary and Lions club members and at the door for $7/adults and $3/children 10 and under.

The Murray Baker Bridge carries Interstate 74 over the Illinois River between Peoria and East Peoria. The bridge is scheduled to be closed for rehabilitation from March 29 to Oct. 31.  Through traffic in the Peoria metro area will be detoured on Interstate 474 and local traffic will be detoured on Illinois Route 40 through Downtown Peoria and East Peoria.

Some WTVP viewers in the Pekin area will have to wait just a little longer to once again watch all of their favorite PBS and local programming. Delays caused by the availability of tower crews and less-than- favorable weather mean it will be a couple of weeks before the station’s free, over-the-air signal is available again in parts of Tazewell County. Although frustrated by the delay, station officials say there is little they can do to accelerate the process.

“We cannot apologize enough to our loyal viewers for this unforeseen delay,” said Lesley Matuszak, WTVP president and CEO. “It all comes down to supply and demand. Increased demand for broadcast antennas has caused delays in manufacturing, but the biggest delays are due to the availability of crews that climb the towers and do the work. Originally our antenna was scheduled to be replaced in mid- December, but the crew was delayed due to issues at other job sites and by the weather. Every winter storm that hits the Midwest can cause further delays.”

Matuszak said that, depending on weather and crew availability, full-powered broadcast of WTVP’s signal is expected in mid-February. At that time, viewers who have not been able to locate WTVP’s new signal should be able to do so. 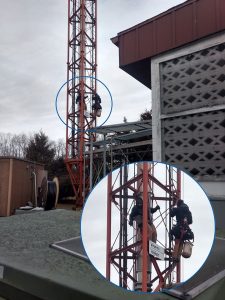 On Jan. 17, WTVP officially switched on a new broadcast transmitter, as mandated by the Federal Communications Commission.  But because there has not been a crew available to install a new antenna atop the tower, a temporary side-mount antenna with reduced power has been installed as an interim solution. (Photo courtesy of WVTP)

Annalee Huntington, co-leader with local chapter of Mom’s Demand Action for Gun Sense in America, will present an overview of grassroots efforts of the group to work within our community to encourage a culture of responsible gun ownership.

Moms Demand Action was founded by Shannon Watts after the Sandy Hook tragedy in 2012.

The event is free and the public is invited.  General meetings are held on the first Thursday to discuss local, state and national topics relating to approved LWV positions, aimed at “Making Democracy Work.”

The League is a non-partisan issues oriented, volunteer, member directed organization committed to open, responsive and effective government brought about by informed, involved citizens with membership open to both men and women in Peoria, Tazewell, and Woodford counties.  For more information, go to www.lwvgp.org

Five Republican candidates are vying for the U.S. Senate seat currently held by Democrat Sen. Dick Durbin and all five have committed to participating in the forum at Five Points. Illinois voters will select one of these Republicans in the March 17  General Primary to oppose Sen. Durbin in the Nov. 3 general election.

The format for the candidate forum will include moderator questions and questions generated from the audience. Candidates will have an opportunity for both an opening and a closing statement and will be timed for their answers.

This event is free and open to the public.