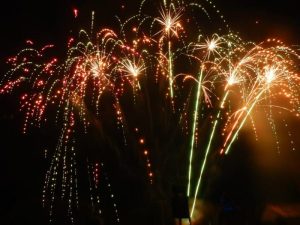 Communities throughout the suburbs will be hosting fireworks displays to celebrate Independence Day over three days, July 2-4.

Lovers of Independence Day fireworks have plenty of opportunities to indulge next week.

With the Fourth of July on a Tuesday this year, the holiday expands to include the weekend preceding the holiday plus Monday.

Here’s a rundown of regional events on and around the holiday:

Durand Charm hosts an annual community Fourth of July Festival in and around Nick Saelens Memorial Park S. Center St. Events start at 2 p.m. daily and run though 7 p.m. Saturday and 9 p.m. on Sunday and Tuesday with rides, food and family fun daily. A street dance is scheduled for Saturday, kids parade and outhouse races on Sunday and a Family Vibe Color Walk and Durand Charm Duck Race on Tuesday.

The Rockford Symphony Orchestra presents the ComEd Independence Day Spectacular at Starlight Theatre on the Rock Valley College campus, 3301 N. Mulford Road. Events begin at 8 p.m., admission is $30 for adults, $28 for students for an evening under the stars with a concert of patriotic favorites, complete with fireworks. Information: (815) 921-2160.

The 54th Annual Rockford Fourth of July Parade kicks off at 7 p.m. on July 4, with Honorary Parade Marshal Joe Marino leading the pack. Known as Mr. Fourth of July, Marino is the Executive Director of the Rockford Fourth of July Civic Committee. He created the committee in 1963, and with community donations Marino purchased fireworks and provided Rockford with its first downtown fireworks show.  This year’s show starts at 9:30 p.m. at Davis Park where more than 5,000 shells will explode over downtown Rockford. Live music from Gramps with Amps and Courtney Davies and the Southern Charm Band will keep spectators at the Davis Park premium viewing area entertained.

Independence Day events in Cherry Valley include a Patriotic Parade starting at Village Hall, 806 E. State, at 1 p.m. Participants are invited to decorate their bikes (or anything on wheels) and prizes will be awarded to all. Fireworks are scheduled after dusk.

— Fireworks shows light up the skies for the Fourth of July–