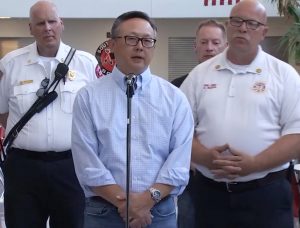 Illinois Environmental Protection Agency Director John Kim speaks at a briefing Monday, June 14 in Rockton where a fire broke out at the Chemtool, Inc. plant. (illinois.gov)

The referral cites violations of the Illinois Environmental Protection Act and Illinois Pollution Control Board Regulations related to chemical fire and release of pollutants to the atmosphere.

Chemtool operates a grease, lubricating oil, and fluids manufacturing plant. The facility registered in the Registration of Smaller Sources (ROSS) program and currently operates under the ROSS.

On June 14, a fire broke out at the facility, resulting in heavy, black smoke that could be observed several miles away from the site. Due to concerns for health impacts due to the fire, an evacuation order was issued by the local fire department for businesses and residents within a one-mile radius of the facility.

Gov. J.B. Pritzker also activated the State Emergency Operation Center to respond to the incident. Personnel from multiple state and local agencies and organizations are responding to this emergency. U.S. EPA has established area monitors to monitor for volatile organic compounds, sulfur dioxide, and lead.

In the referral, the Illinois EPA cites violations of the Illinois Environmental Protection Act and Illinois Pollution Control Board regulations by Chemtool for causing or allowing the release of pollution into the atmosphere. Additional violations may be added as information is available regarding the fire.

The referral asks the Attorney General to pursue legal action and require Chemtool to immediately stop the release and provide documentation to the Illinois EPA including the cause of the fire, and an estimate of the nature and amount of any emissions of sulfuric acid mist, particulate matter, and other air contaminants emitted as a result of the fire.

The company will be asked to develop and implement a work plan to remove any hazardous material from the site and address other compliance issues related to the incident. Additional procedures shall be established to prevent the reoccurrence of future events.