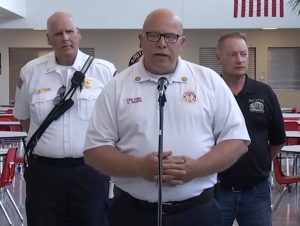 Kirk Wilson, chief of the Rockton Fire Protection District, briefs the media on the Chemtool plant explosion Monday, June 14.  Chemtool is the largest manufacturer of grease in the United States.  (illinois.gov)

The fire is expected to take several days to extinguish.

The state notified authorities in Winnebago, Stephenson and McHenry counties of the declaration.

The Illinois Environmental Protection Agency (IEPA) and Illinois Emergency Management Agency (IEMA) dispatched crews to the area to assist local jurisdictions to expedite assistance and resources. The Illinois State Emergency Operations Center in Springfield was activated and members of the Illinois National Guard and mobile response vehicles were dispatched to the area.

Out of an abundance of caution, local authorities have evacuated a two-mile radius around the Rockton facility.

Residents are encouraged to seek shelter at Roscoe Middle School, 6121 Elevator Road in Roscoe. State health officials are recommending that residents within the evacuation zone to northern part of Rockford utilize the use of masks or face coverings for the time being.

This is to prevent the inhalation of particulate matter (soot). As this emergency progresses, it is important for residents to stay informed by monitoring local media for changing instructions.

“I am monitoring this situation closely and will make all resources available to the surrounding communities as we work to keep people safe,” said Pritzker. “Teams from multiple state agencies are on the ground and coordinating closely with local authorities and we will continue to make additional information available as soon we have it. To those impacted, please listen to guidance from emergency officials and know that the state of Illinois is doing everything possible to protect you and your loved ones.” 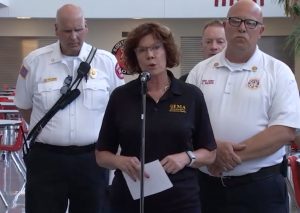 Shortly after 7 a.m., June 14, a large fire broke out at Chemtool, 1165 Prairie Hill Road in Rockton.  Chemtool is the largest manufacturer of grease in the United States.  Chemtool participates in the Tier II program.

Personnel from the following State agencies and organizations are responding to this emergency:

In addition, the Illinois Emergency Management Agency has activated its Radiological Emergency Assessment Center (REAC) and the Illinois National guard Civil Support Team to monitor the environment to establish air monitoring to validate plume modeling.  These teams are used to make environmental recommendations to keep the general public safe.