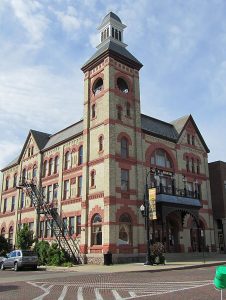 Hidden within the history of the grand old mansions, historic theaters and bygone cemeteries of Northern Illinois are stories of ghostly apparitions and unexplained events.

Exploring these mysteries is the focus of Haunted Rockford Paranormal Events (www.hauntedrockford.com) and  founder Kathi Kresol.

As a full time librarian with the Rockford Public Library System, Kresol’s interest in local history and folklore led her to form the Haunted Rockford group 15 years ago.

“We offer a range of events like walking tours, cemetery tours, public investigations and haunted bus tours,” she said.  “We often bring in a psychic and a paranormal investigative team for our events which are mostly in Winnebago County.”

Haunted Rockford group has been invited to investigate other allegedly haunted buildings outside of the county as well.

Longtime Rockford landmarks such as Veterans Memorial Hall, the Coronado Performing Arts Center and the Tinker Swiss Cottage Museum and Gardens are just a few of the places that Kresol and the group have toured and investigated for paranormal activity.

“I truly believe that people, places and things can be haunted,” she said.  “Veterans Memorial Hall (211 N. Main St.) was built in 1903 by veterans for veterans and some renowned Rockford veterans have lain in state here, had their funerals here.”

Many personal items belonging to deceased veterans are on display there and this, some say, explains why the building contains heightened paranormal activity.

In her book, Haunted Rockford, Kresol shared a first-hand account of seeing an apparition while visiting Veterans Memorial Hall.

“I was waiting outside the door that opens onto Main Street for the manager to unlock the door.  As I was starting to wonder if I should knock again, I saw a woman dressed in a long gown descending the stairs.  I thought maybe she was there assisting the manager, so I knocked on the glass. 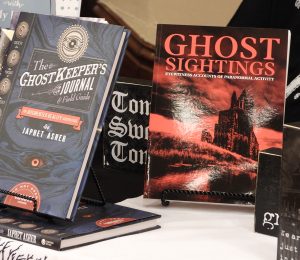 Some of the books on sale at the Illinois Paranormal Conference. (Photo by Lynne Conner / for Chronicle Media)

“The woman never turned to look at me as she walked down the stairs to the first floor and turned the corner to continue down to the basement.  I was really annoyed by this time, and when the manager let me in a few minutes later, I shared the story and told him that the young lady was very rude to completely ignore my knockings.  The manager had a strange expression on his face as he told me that he was alone in the building.”

The nearby Coronado Performing Arts Center, 314 N. Main St.,  is another local venue that is said to be haunted.

“The theater was built in 1927 by Willard and Erma Van Matre and apparently they are still there,” Kresol said. “Mr. Van Matre has been seen in the lobby, in his tuxedo welcoming guests.  They really love this attraction they brought into the Rockford community.

“A gentleman who was working there saw the Van Matres up on the stage dancing and when the Coronado staff researched the history of the theater, they found out that the apparition of the dancing couple happened on the night of what was Erma’s birthday.”

Kresol notes that the majority of the paranormal activity at the Coronado Performing Arts Center involving the Van Matres is good natured and light-hearted; unless someone disrespects the space therefore invoking the ire of Mr. Van Matre.

The Tinker Swiss Cottage Museum and Gardens, 411 Kent St., is one of Rockford’s oldest historic homes. Built in 1865 by businessman and industrialist Robert Tinker on a bluff overlooking Kent Creek, the home and all of its contents were donated to the Rockford Park District in 1943 following the death of Robert’s second wife Jesse.  Members of the Tinker family who were living in the home at the time of their deaths are said to appear in and around the home, gardens and barn. 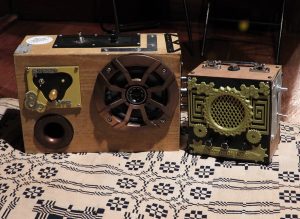 Tools of the trade, handmade spirit boxes are set up in Robert Tinker’s bedroom before a paranormal session. (Photo by Lynne Conner / for Chronicle Media)

“On one of the tours, a woman came up to tell me how much she enjoyed the experience and having the psychics along and the paranormal investigators with the group,” Kresol said. “Then she said, ‘I especially enjoyed seeing the lady dressed up in historical clothing sitting on the bench.

“I was kind of half listening to the woman, but when she referred to the lady in period clothing sitting on the bench, I told her that I didn’t have anyone like that on the tour.”

The Tinker Swiss Cottage Museum and Gardens, according to Kresol, is one of the most active haunted venues in Rockford and was even featured on A&E’s Ghost Hunters TV show in 2012.

Recently, Kresol organized the Illinois Paranormal Conference which was held Sept. 28 at Veterans Memorial Hall.  The event featured speakers and vendors from around the state who shared stories of supernatural investigations and research.

Among those attending the conference was Dale Kaczmarek, president of the Ghost Research Society (www.ghostresearch.org). He’s a ghost investigator and has authored six books.

Ghost stories and tales of local folklore passed down by his Polish grandparents sparked Kaczmarek’s interest in the supernatural world.

“As an adult, I wanted to find out if these stories were factual or if they were urban legends or old wives’ tales.  So that’s what got me involved with ghost hunting.” he said “The Stickney Mansion in the village of Bull Valley in McHenry County was built in the 1800s … with round corners.  There are no square corners in the building. There was a lot of spiritualism going on at that time with séances, communication with spirits.  It was said that the building’s round corners made the structure less enticing for bad ghosts to hide in.  That’s a true story about the mansion.” 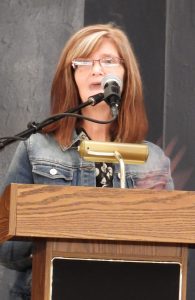 According to Kaczmarek, there has been paranormal activity reported in the building, since the Stickney family moved out.  Currently, the mansion is home to the Bull Valley Police Department.

The Mt. Thaber Cemetery in McHenry County is another location for paranormal activity Kaczmarek said.

“There have been reports of all kinds of activity in the cemetery like orbs and strange lights.  People have seen strange things out there; they’ve heard and recorded children’s voices in the area.”

“We were out there doing an investigation many years ago at night and got a photo of an orb,” he said.  “Well, a policeman came over to see what was going on and when we showed him the photo of the orb, he got back in his squad car and took off.”

Kaczmarek added that his group always tries to be respectful when investigating cemeteries and will tell local law enforcement of their plans.

The Woodstock Opera House, built in 1889, has also had a history of strange occurrences over the years.

“It’s actually haunted by a ghost named Elvira who has her own seat, DD 113, on the balcony,” Kaczmarek said.

“According to the story, Elvira was trying out for a part in a play which she didn’t get, so she ended up throwing herself off the balcony and died.  That’s why people believe the opera house is haunted.  Elvira has also been known to ‘boo’ a performer who misses a line or makes a mistake on stage.  People have heard a booing sound coming from the balcony.”

Whether a believer or skeptic, the stories of these haunted places and the families connected to them add another dimension to the colorful history of northern Illinois.

“I tend to view these haunted sites as a source of pride for the people who spent their lives there,” Kresol said. “The Tinkers, the Van Matres, the veterans and the Stickneys are so proud of their contributions to our region that they just don’t want to leave us.”