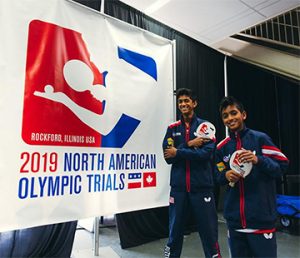 CAPTION: The International Table Tennis Federation (ITTF) has announced the first-ever Olympic trials to be held in Rockford. The 2019 ITTF North American Olympic Table Tennis Trials are slated for Saturday, Oct. 5 at the BMO Harris Bank Center in downtown Rockford.

The 2019 North American Olympic Table Tennis Trials will feature men’s and women’s teams representing Team USA and Team Canada. Teams consist of three players (one reserve per team) and will play best three of five matches. The winners will qualify for the 2020 Summer Olympics in Tokyo.

“All eyes will be on Rockford in October as we host this incredible international event,” said RACVB President/CEO John Groh. “We will get to watch the best table tennis players from Canada and the United States compete for the opportunity to represent North America at the Tokyo 2020 Olympic Games. It’s very exciting for Rockford and for sports enthusiasts that the Road to Tokyo will go through Rockford.”

This marks the first time since 2012 (Cary, NC) that the North American Table Tennis Trials have been held in the U.S. The 2016 Trials were produced outside of Toronto in Markham, Ontario.

While Groh anticipates an increase in visitors to the region that weekend, the RACVB hopes the event will also build community engagement and pride throughout the city of Rockford, thus providing the city the ability to host other major international sporting events in the future.

Tickets for the 2019 North American Olympic Table Tennis Trials may be purchased through BMO Harris Bank Center and Ticketmaster beginning Tuesday, May 28. Ticket prices range from $25 to $35.

The Mercyhealth Neonatal Intensive Care Unit (NICU) is participating in a Kangaroo-A-Thon beginning May 1 to encourage families to hold their babies for extended periods of time. Mercyhealth joins other NICUs in the United States, Canada and around the world in this project that culminates on Kangaroo Care Awareness Day on May 15.

Kangaroo care is a form of holding a baby on a parent’s chest. It’s known to be extremely important in the growth and development of babies, particularly preterm babies.

Mercyhealth is encouraging parents in the NICU to hold their babies skin-to-skin as long and as often as they are able. If the baby’s condition prevents them from being physically placed on the parent, they can do containment care instead, which can be encircled holding or hand hugging. The staff will assist them in whichever method is best for their baby.

“We want to keep track of how much time we do kangaroo care in the NICU over these two weeks,” said Pam Allen, Mercyhealth NICU Nurse Manager. “Each time a parent holds their baby, we’re asking them to log their time on a form at their baby’s bedside.”

On Thursday, May 16, Mercyhealth will hold a celebration at the end of the Kangaroo-A-Thon. The total number of hours will be calculated. Each family that participates will be given a special prize pack to commemorate this amazing effort for our babies.

Two Rockford men have been indicted for a series of armed robberies in Rockford and Loves Park last month.

On April 19, Rockford Police Officers were called to 200 S. Gardner after a report of an armed robbery. Officers observed a female victim who reported that two men, inside a red pickup truck, pointed gun at her and demanded money.

A short time later, on April 19,  Rockford Police responded to the 3400 block of Liberty Drive after a male on a bicycle reported a red pickup truck pulled up beside him. The victim told police that the passenger inside the truck, pointed a gun at him and forced him off the roadway.

On April 20, at approximately 1:45am, Rockford Police Officers were dispatched to a Rockford hospital to investigate an armed robbery. Upon arrival, police met with a male victim, who had visible injuries to his face. The victim told police a red pickup truck pulled up next to him while he was at a stoplight in Loves Park when a male got out and approached his vehicle. The suspect pointed a gun at the victim and demanded money. During the course of the armed robbery, the victim was struck multiple times in the face with the weapon. The Loves Park Police department were notified and conducted a follow up investigation.

Later in the evening on April 20, Rockford Police responded to the 4100 block of Harrison Avenue for another armed robbery. Upon arrival, officers met with a male victim, who reported he was inside his vehicle, when a male approached and asked him for money. The suspect struck the victim numerous times in the head with a glass bottle. During the course of the attack, the suspect took the victim’s wallet, car keys and cell phone from inside the victim’s vehicle.

Wooden and McCormick are scheduled to be arraigned at 9 a.m. on May 30 at the Winnebago County Criminal Justice Center.