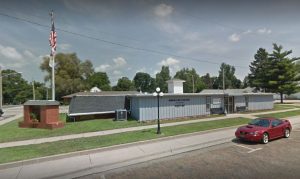 The American Legion Post 89 in Metamora donated this war memorial to be on display on the first floor of the Woodford County Courthouse. It contains details, facts, images and letters from World War II with information from the National Archives. (Photos by Holly Eitenmiller / for Chronicle Media)

For everyone involved, the demolition of the American Legion Fred Herring Post 89 in Metamora was a sad situation.

A portion of its past, however, has been salvaged and sheltered thanks to Woodford County Sheriff Matt Smith.

An impressive World War II exhibit that once stood in the building at 205 E. Partridge now resides on the first floor of the Woodford County Courthouse, less than a stone’s throw away from the Veterans Commission office.

“I was concerned that it would get put in storage and become damaged,” Smith said. “It’s permanent unless they find a better permanent place, such as a legion building.”

Built in the 1940s, the underground building became the Metamora Community Center, and was home to many groups and organizations. Boy Scout troops met there. A local sewing club would have weekend-long gatherings, sewing machines in tow. Martial arts were taught there.

And, of course, the American Legion Post 89 called it home. But, time took a toll on the building, and it was first shuttered, then demolished in 2015, five years into a 10-year commitment from the village to provide accommodations for the post, from which they purchased it from for $1.

“I was a little disappointed in (Mayor) Ken Maurer because I don’t think he fought for us like he should have, and the city didn’t handle it well,” Post 89 president Nauman said. “They were going to build a nice community center on the same location where the building was … it went on the backburner.” 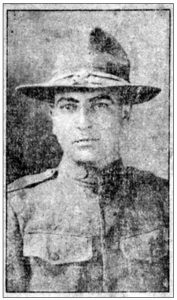 Shortly after World War I, the American Legion formed a post and named it “Fred Herring, Post 89” after Metamora resident Pvt. Frederich Herring, who was killed in France months before the war ended in 1918. He was 24. (Photo courtesy of American Legion Post 89)

Nauman said he thinks the building’s damages, such as mold, were “nickel and dime” problems. When the village hired contractors to assess its condition, they discovered asbestos and extensive mold caused by water damage as a result of regular leakage.

Contractors called it a “sick building”, and combined with the costs of making it handicapped accessible, the price tag for repairs and updates was around $1 million. The building was demolished in May 2015.

“The Legion does a lot for the community, doing marches and Taps,” Maurer said. “They’re a good, valuable group, and I don’t want to insult them. The building wasn’t safe and we couldn’t continue to use it.”

The Legion was given enough room at the Metamora firehouse to hold meetings and store memorabilia and the essentials for performing Taps and engaging in public events, such as parades.

Unfortunately, there was no room for the WWII display, which stands around 5-feet high, and is nearly just as wide. The heavy, wood-framed exhibit was donated to the Legion by WWII veteran Marine Captain Walt “Wally” Wyman, who now lives in Oregon.

The large, tabulated posters originated from the National Archives, and creatively detail the WWII time in photos, documents, news articles and other historical texts and memorabilia.

It was shuffled first to Prairie District Library on Partridge Street, where it remained for more than two years. Then the library wanted it removed for need of space, and that’s when Smith stepped in.

He felt the 121-year-old courthouse was a proper place for the display, where there is ample room for it in the foyer. It also compliments a towering veteran’s memorial, “Woodford County Honor Roll” which stands on the second floor.

The courthouse will be its permanent home, at least until Smith is replaced, when it will be at next sheriff’s discretion to remove it.

As far as a permanent home for the Legion is concerned, Maurer said the village is considering several options that will benefit the town and the clubs that were displaced by the loss of the hall.