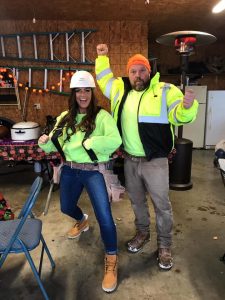 In the months preceding her death on Nov. 12, Taylor Lynn Rudd, 25, was devoted to raising the spirits of her father, Troy, following the recent death of his wife. “Dressed up as Troy Boy this year. He’s super proud … Happy Halloween!” she wrote along with a photo she posted to Facebook on Oct. 31.

Family, friends, educators and community members are mourning the death of a young woman who spent the last months of her life raising her father’s spirits after the recent loss of his wife.

Taylor Lynn Rudd, 25, of Metamora died Nov. 12, in a multi-vehicle accident on eastbound Interstate 74 near Morton in Tazewell County.

Around noon that day, Rudd was traveling behind a semi tractor-trailer in her silver Honda Accord when the truck slowed.

A second semi tractor-trailer behind Rudd failed to slow, and rear-ended her vehicle, causing her to veer from the road and crash. The second truck then hit the first truck.

The truck driver, Mark Elbus, 62, of Kewanee was cited for failure to reduce speed to avoid an accident.

Harsh weather Nov. 11 brought with it snow, ice and record low temperatures that lasted well through Tuesday, Nov. 12 and some municipalities, such as Peoria, were using a salt-and-liquid mixture in some areas to remedy accumulated ice.

Rudd recently graduated from Tricoci University of Beauty and Culture in Peoria. Her family describes her as “a talented esthetician who loved making people feel as beautiful on the outside as they are on the inside.”

“There are no words to describe how special this sweet and beautiful young lady was to me, my former student who became my friend, you were beautiful inside and out,” Tricoci Master Esthetics Educator Kelly McCabe Humphrey wrote in a Nov. 13 Facebook post. “You will be greatly missed by anyone who knew you.  My heart is breaking for your family.”

Rudd is survived by her father, Troy Rudd, of Peoria and mother, Deanna Zimmerman of Metamora.