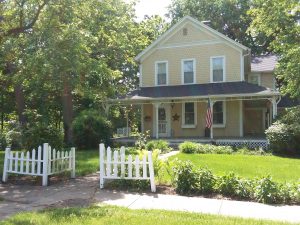 The house at 800 S. Main Street is believed to be one of the first built in Eureka. Dates of construction vary, and Eureka author Carol Anderson believes it was built in the 1840s. This home, and nearly 200 others, are featured in Anderson’s book, “If Only Homes Could Talk.” (Photo by Holly Eitenmiller / for Chronicle Media)

One day, Carol Anderson stepped off her porch for a leisurely walk around her neighborhood to snap photos of old homes. The walk turned into an eight-year odyssey that culminated in two books, one in print and one in production.

“I was just going to out some afternoon and photograph old houses. I had no intention whatsoever of talking to people or writing a book,” Anderson said. “Since I never set out to do this, it wasn’t like it was ahead of me, as if it were planned. It was as if, all of the sudden, it happened.”

With a bit of gentle prodding from Karen Fyke, a long-time member of the Woodford County Historical Society, Anderson agreed to research and photograph Eureka’s historical structures, then compile them into a book.

The project grew rapidly and exponentially, and, in short order, became two-fold. Anderson separated the public buildings from the residences to author two books, subtitled, “Public Buildings” and “If Only Houses Could Talk.”

The first, a 208-page compilation that includes the old Woodford County Jail and the Eureka College administration building, was published in 2016. The latter is in its second proofing, and will likely be published in June.

“There’s been a great response to the first book, it’s brought back so many memories for people who lived here and grew up here,” Anderson said of the book that’s been shipped to 23 U.S. states.

Anderson grew up in Eureka during the 1940s and 50s, a time that she said stands in much contrast to today’s Eureka.

“It’s completely changed, the whole downtown district was stores that had everything that you would need, and now you have to leave town to get those items,” Anderson reminisced. “A shoe store, two drug stores, different restaurants, several grocery stores, dime stores. I wish it were still that way.” 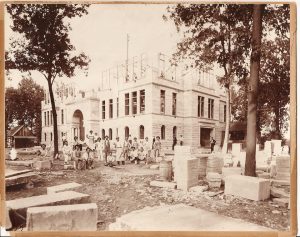 For 50 years, Metamora, once called Hanover, served as the county seat. In 1894, Eureka assumed the role and the Woodford County courthouse (above), which still stands today on Main Street, was completed in 1898 for about $90,000. (Photo courtesy of Woodford County Historical Society)

Among them, is Mike’s Sweet Shop. Established in 1933, the soda shop was a place to sit down at a counter with friends and enjoy homemade candies and sodas served from old-fashioned soda fountains.

Mike’s was across the street from the courthouse and the Woodford County Correctional Facility, both of which are also featured in the book. The former jail was demolished about 20 years ago to make way for a new jail.

The old jail was a house in which, at one time, the sheriff used to live with his family, and it was said the sheriff’s wife would cook meals for the inmates.

“Olio Township cemetery is in the book. The iron fence there was erected in 1906. The little office building, no one knows when it was built,” Anderson said. “Many historical people are buried there. The Bullocks, Majors, Radfords, Dickinsons … all the Eureka names of the early founding fathers are there.”

At least 100 structures occupy “Public Buildings.” Houses featured in “If Only Houses Could Talk” number 178, but there could have been more.

“I didn’t use all 270 addresses I was working with, because I didn’t have a lot of information on all of them,” Anderson said. “It was just so interesting, though, to talk to so many people and hear their stories. Some were personal stories, some were facts about the house, some were about the families that lived there.” 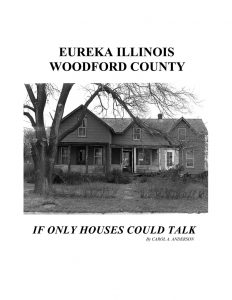 Eureka resident Carol Anderson said she never intended to author books when she started taking photos of old Eureka homes. Her hobby resulted in two books, “Public Buildings”, in print, and “If Only Houses Could Talk”, which is in production. (Photo courtesy of M. T. Publishing, Inc.)

Along with narratives, Anderson also relied on courthouse and library records, and leveraged resources available through the historical society to make the book rich with information, anecdotal and factual.

It’s believed, she said, that one of the first homes in Eureka resides at juncture of Main Street and College Avenue. The pretty yellow house is believed to be almost 170 years old, though no one is sure.

“The oldest house is probably at 800 S. Main St.,” she explained, “but different dates have been given for when it was built, possibly the 1840s, but I can’t be sure.”

The stories aren’t always about the house itself, but also include tales on the history of some the fixtures and furniture that are original to the homes, and have been kept and tended to for generations.

The task of researching, compiling and editing all of the properties was daunting, but Anderson said she also had a few “Eureka!” moments on her journeys through town.

“I grew up here my whole life, and I was familiar all of the buildings in this town, and most of the homes,” she said, “but there have been a few that I had never seen before in my life which were a big surprise when I discovered them.”

Houses on East James and North Meek streets, Anderson said, were new to her, despite their age and their discovery and subsequent stories of them are fond experiences.

Anderson’s first book is available through the Woodford County Historical Society at 112 N. Main Street. The second will be available in about a month, and pre-orders may be made by picking up a form at the historical society’s office or by credit card online at www.mtpublishing.com. Each are 8.5 x 11, and cost $45, though shipping costs are involved if sent directly from the publisher.

HOW TO GET THE BOOK

Carol Anderson’s first book is available through the Woodford County Historical Society at 112 N. Main St. The second will be available in about a month, and pre-orders may be made by picking up a form at the historical society’s office or by credit card online at www.mtpublishing.com. Each are 8.5 x 11, and cost $45, though shipping costs are involved if sent directly from the publisher.