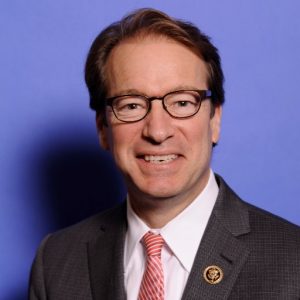 Is Peter Roskam vulnerable as he seeks a seventh term in Congress next year?

At least seven Democrats see an opportunity to unseat the Wheaton Republican and have launched primary campaigns for their party’s nomination to oppose Roskam in next November’s general election.

Roskam, 56, has robustly supported  President Donald Trump in the first year of the new Republican Administration. He’s voted the Trump line  nearly 91 percent of the time —  including a repeal of the Affordable Care Act while advocating a sweeping tax reform bill.

He has most recently helped shape a sweeping tax bill as member of the tax-writing House Ways and Means Committee and on the House-Senate conference committee that resolved differences between bills passed by the two chambers.

But to many of Roskam’s constituents, the positions on health care and the tax bill — especially possible limitations on deductions of mortgage interest and state and local taxes —  are said to be increasingly unpopular.

Despite those votes,  outside observers still give Roskam the edge.

Capitol Fax, produced by longtime Illinois political observer Rich Miller, said a mid-November survey by Democratic-leaning Public Policy Polling found Roskam had a 53 percent disapproval rating and that he would lose to a generic Democrat by a 51-41 percent margin at the time of the survey.

Further, the PPP poll reported a majority of voters (54%) would be less likely to support Roskam if he voted for the Trump tax plan.

Although boundaries have shifted over the years, the west suburban region has voted Republican for decades. It previously was a compact district largely covering DuPage County and represented for much of that time by the late Henry Hyde, who died in 2007.

The Sixth District was redrawn with expanded territory following the 2010 Census.

Democrat Hillary Rodham Clinton found local voters receptive during her 2016 presidential run and carried the district by seven points over  Trump. That  reversed a nine-point win by Republican Mitt Romney over incumbent President Barack Obama in 2012.

The district is targeted by Democratic Congressional Campaign Committee as among 23 currently represented by Republicans but won by Clinton last year.

Roskam has an outsized financial edge with $1.3 million in campaign cash on hand as of Sept. 30, according to Federal Election Commission reports.

Howland is back for another run after a nearly 20-point loss to Roskam in 2016.