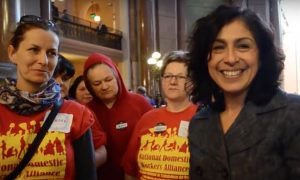 State Rep. Lisa Hernandez poses with domestic workers in the Illinois statehouse in Springfield in April. (Photo courtesy of Domesticworkers.org)

Illinois nannies, housekeepers and caregivers for the elderly and disabled are on their way to minimal job protections other workers take for granted, if a new law is signed by Gov. Bruce Rauner in the next couple of months.

The Domestic Workers Bill of Rights (HB 1288) passed in the Illinois Senate last week and is likely on its way to becoming a law.

If Rauner signs the bill, the new law will guarantee domestic workers minimum wage, protections from sexual harassment and the right to one day off (24 consecutive hours) per week.

Until now in Illinois, through a legal loophole, domestic workers were not included for protection under the Fair Labor Standards Act that guaranteed minimum wages and non-overtime hour requirements.

“Domestic workers have been a critical part of our homes and economy, freeing up the time and attention of working families across this state,” said a statement from Dist. 24 State Rep. Lisa Hernandez of Cicero, who sponsored the bill.  “As a working parent, I have experienced first-hand just how important their work is.”

According to demographic experts, the demand for “direct care” workers will explode in the next five years. The U.S. Dept. of Labor predicts a demand for almost 5 million direct-care workers by 2020.

Two trends pushing the demand are mothers, age 25-30, entering the workforce and the aging population, which will create a need for caretakers. Almost 70 percent of that care will take place inside the home, according to the New York-based Paraprofessional Healthcare Institute.

There are an estimated 35,000 domestic workers in Illinois.

“We trust domestic workers to help us care for our homes, our children, our elders and our family members with disabilities,” said bill-supporter and retired Winnetka lawyer Peggy Slater who has spoken about her own struggle to fairly pay her housekeepers. “By helping us meet these basic needs, domestic workers do the work that makes all other work possible. They deserve to be treated with respect, and they deserve to make a decent living.”

Without basic labor protections, domestic workers can be vulnerable to exploitation.

“When I hear my employer abuse me verbally it makes me feel like a second class person,” said Chicago domestic worker Isabel Escobar on a video made to support the bill.

“I am just doing my job to gain money to eat, to pay for my home and to educate my children,” she said. “I’ve met many domestic workers with experiences like mine and I feel strong because we’re united.”

Housekeeper Diane Grissett of Chicago travelled with a group to Springfield in April with a group of other domestic workers to urge the senate to pass the bill. She said members of her group took care of the elderly, children and also cleaned apartments.

“[Domestic workers] stand together as a family because when one fall, we all fall,” Grissett said. “We give that helping shoulder to support that other sister.”

“Good domestic workers help all of us work,” said Rev. Joy Rogers, the retired Dean of St. James Episcopal Church in Chicago. “When I was a young mother I hired people to help me with childcare and house cleaning so I could do my job. And now my husband and I are at an age where domestic help is looming again to help us as we age, and hopefully let us stay in our home as long as possible.”

As an employer, Rogers said she has always paid more than minimum wage.  “Sometimes I hired my neighbors who had small children at home and it was better than being a waitress,” she remembered.

“Who are going to leave your kids with? You don’t want an entry-level person who doesn’t do their job. You want a professional person.”

The new rules will give guidance to women just entering the workforce who need to know how much to pay their nannies.

“It gives employers accountability and a way to know what they are supposed to do,” Rogers said.

The proposed legislation amends four other labor laws to include domestic laborers in worker categories such as retail and factory workers that already have employee protections.

Other chief sponsors of the bill include powerful female house Democrats Barbara Glynn Currie, Rita Mayfield, Esther Golar and Cynthia Soto. The Chief Senate Sponsor was Ira A. Silverstein of Chicago.  The bill should appear before Gov. Rauner within the next 30-90 days, said a spokesperson for the campaign.