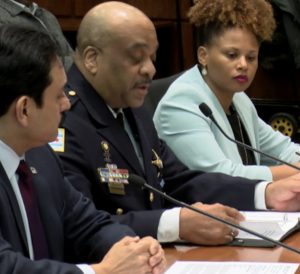 Chicago Police Supt. Eddie Johnson (center) gives his support to gun-control legislation pending before the state Senate. Johnson said passage of the bill named the Paul Bauer Act, which would prohibit the sale and possession of high-capacity magazines greater than 10 rounds and body armor, would honor the memory of the police commander killed Feb. 13. Alongside Johnson are state Sen. Tony Munoz (D-Chicago), sponsor of two of the gun-control measures before the Senate, and Tiffany Newbern, deputy director to Chicago Mayor Rahm Emanuel. (Blueroomstream.com)

The indifference to gun violence in the black community is unconscionable, according to a state senator who represents some of the areas hardest hit with violence.

“When dozens of white suburban kids are slaughtered in a school, we are rightfully horrified,” said state Sen. Don Harmon (D-Oak Park). “But when twice that number of young black men are killed on the West Side (of Chicago) in my district and around my district it goes unnoticed and that is even more horrible.”

Harmon noted that he has pleaded with the National Rifle Association to cooperate with lawmakers “because there is common ground.”

“We try to find something to do to stem the violence and we end up drawing lines: this gun, not that gun; 10-capacity magazine when it should be a 13-capacity magazine,” the fifth-term state senator said. “The experts on guns refuse to engage with us to help us draw those lines in the right places.”

Harmon made his comments last week as members of the state Senate Subcommittee on Firearms heard testimony on five gun-control measures pending in the state House. The House bills would also need to be approved by the state Senate before advancing to the governor for his consideration. 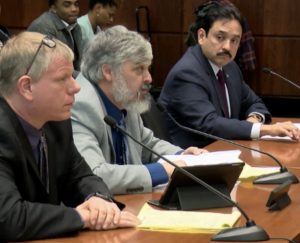 Todd Vandermyde (center) of the Federal Firearms Licensees of Illinois tells state Senate members that the proposal to restrict individuals under age 21 from possessing assault weapons is “very broad and very sweeping” and would impact young adults’ competition shooting. Alongside Vandermyde are: Eric Callis (left), a member of the board of directors at the Aurora Sportsmen’s Club, and state Sen. Tony Munoz (D-Chicago), the sponsor of two gun-control measures pending in the state Senate. (Blueroomstream.com)

The House bills under consideration in the Senate are:

“As a city, we’re still heartbroken. We must remain committed to never forgetting Paul Bauer and being there as a support for his wife and his daughter to recognize the enormous debt that we, as a society, can never repay,” Johnson said. “One of the things we can and should do is take every step that we can to prevent this from happening again.”

State Sen. Tony Munoz (D-Chicago) said he is supporting the ban on assault weapons for anyone under 21 years of age in response to 13 people being shot with assault-style rifles last spring in two of the neighborhoods he represents.

“There’s no reason for anyone, especially under the age of 21, to be in possession of an assault rifle. Too often, these weapons are used to commit crimes and terrorize our communities,” Munoz said. “As we have seen in incidents nationwide, we are far beyond the time to take action on gun violence.”

Todd Vandermyde of the Federal Firearms Licensees of Illinois, a nonprofit trade group for federally licensed firearms dealers, said the measure to restrict individuals under age 21 from possessing assault  weapons is “very broad and very sweeping.” 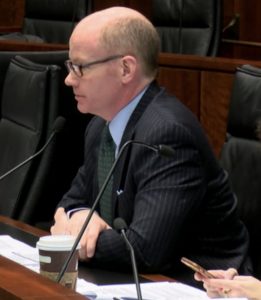 State Sen. Don Harmon (D-Oak Park) talks during a Senate hearing last week about his frustration with attention not being given to gun violence in predominantly black neighborhoods. (Blueroomstream.com)

He said as written, the legislation would ban the Remington 742, a typical deer-hunting rifle, from being possessed by anyone under 21.

“You could be a 20-year-old veteran from (serving in) Kandahar who has bought any one of these rifles and the state of Illinois is now going to tell you that you have to surrender that, your lawfully owned property, because you have a FOID card, you have gone through the waiting period, you have done all that,” Vandermyde said. “The state of Illinois is now going to require that you surrender your property. I think you have some Fifth Amendment (to the U.S Constitution) issues with that.”

He said his 18-year-old son competes in shooting tournaments with an assault weapon and that those competitions have been some of the best father-son time they have ever had.

Vandermyde said when he is in Springfield lobbying for gun owners’ rights, his son is the man of the house.

“It is potentially a felony for him to simply pick up that rifle and defend our home if need be,” Vandermyde said.

The gun owners’ lobbyist said the legislation was “hastily written and somewhat sloppily written” and is “not only a broad attack on gun ownership and on young adults, but on the culture of gun clubs and families who shoot together.

“When you say our kids can’t go to the range and shoot with us, they can’t compete in their sports,” it is tough to support the proposed ban, Vandermyde said.

“My son, Jake, doesn’t play football or soccer, swim, any of that stuff,” Vandermyde said. “This was his sport. For the next three years, you want to take it away from him.”