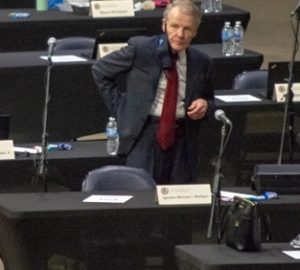 House Speaker Michael Madigan is pictured on the floor of the Bank of Springfield Center on Friday, Jan. 8. The BOS Center is serving as the House chamber for the final days of the 101st General Assembly, while Madigan is facing a challenge to his speakership in the 102nd General Assembly. (Capitol News Illinois photo by Jerry Nowicki)

SPRINGFIELD – House Speaker Michael Madigan announced he would suspend his campaign for House Speaker of the 102nd General Assembly on Monday, Jan. 11 but his statement made clear he was not withdrawing from the race.

“This is not a withdrawal. I have suspended my campaign for speaker,” Madigan said in a statement released by his office on the morning of Jan. 11.  “As I have said many times in the past, I have always put the best interest of the House Democratic Caucus and our members first. The House Democratic Caucus can work to find someone, other than me, to get 60 votes for Speaker.”

The last sentence of the brief statement is indicative of the uphill battle Madigan’s challengers will have to climb – they will need 60 votes, or 42 more than any challenger appeared to have Sunday night.

The House speaker is chosen by House members, and can receive both Republican and Democratic votes. There are 73 Democrats and 45 Republicans who will be seated in the 102nd General Assembly.

Traditionally, however, a majority party speaker receives votes from members of their own party.

In the first closed-door unofficial ballot conducted between Democrats in a private room at the Bank of Springfield Center on Sunday night, Madigan received 51 votes, according to several reports confirmed by Capitol News Illinois.

The speaker also has the endorsement of the Illinois Legislative Black Caucus and Illinois Legislative Latino Caucus – two key voting blocs that make up the majority of his support, although some individual members of those caucuses have said they would not vote for Madigan.

The second leading vote-getter in the closed-door meeting was Rep. Ann Williams, D-Chicago, who had just 18 votes. Rep. Stephanie Kifowit, D-Oswego, had three votes. Rep. Kathleen Willis, D-Addison, dropped out of the race before the vote, giving her support to Williams.

The official vote does not happen until Wednesday, when the 102nd General Assembly is scheduled to convene, seating new and reelected members.

Until then, lawmakers are set to consider a flurry of transformative legislation backed by the Black Caucus during the final two days of the 101st General Assembly – measures that have also received Madigan’s blessing.

Over the first three days of session, the discussions of who will be the next speaker have punctuated long days of policy-oriented discussion.

Capitol News Illinois was awaiting callbacks from several lawmakers Monday afternoon to discuss the impact of Madigan’s announcement, but committee hearings were ongoing at the Bank of Springfield Center which is hosting the House session amid the pandemic.

A House source said there would likely be another vote for speaker Monday evening.

“With 36 hours left before the swearing-in of a new General Assembly, Michael Madigan continues to create uncertainty and misdirection,” House Minority Leader Jim Durkin, R-Western Springs, said. “His latest statement about suspending his bid for speaker, but not withdrawing, is typical of his style and appears to be another ploy or a head fake. For the sake of the institution, his caucus must demand that he be direct and honest about his intentions – in or out.”

Madigan’s announcement could also pave the way for more Democratic members to announce their bids for the speakership.

Rep. Kelly Cassidy, a Chicago Democrat who voted present in the first round of voting and has pledged not to support Madigan, issued a statement Monday as well.

“This is truly a historic moment for our caucus and our state. Speaker Madigan’s decision to suspend his campaign is an opportunity for us to come together as Democrats and carve a new path forward,” Cassidy said. “Our caucus’ growing diversity is our strength, and we need to respect that as we decide what our leadership team looks like going forward. I anticipate that this debate will be robust and impassioned, but in the end, we are all Democrats, and we will come together to turn the page and fight for new solutions for the people of Illinois.”

She added the news “came as a shock to a lot of the caucus,” noting she expects the race “will change dramatically as a result,” but she stopped short of announcing a candidacy of her own.

“This is a time to hear what all of our colleagues have to say about their visions for a new leadership team. I have nothing to announce right now, but will keep everyone apprised if that should change,” Cassidy said.

Gov. J.B. Pritzker addressed Madigan’s statement during an unrelated news conference on Monday afternoon in his office at the Capitol.

“As I have said many times, I will work with whoever the members of the House of Representatives elect as their speaker,” he said. “Choosing the speaker is the sole responsibility of those representatives, and it is clear that the members are taking their choices seriously.”

He said the last time he spoke to Madigan was “a couple days ago,” discussing a measure to decouple the state’s tax code from federal tax code in regard to a measure passed in a federal COVID-19 response bill.

“He is still the speaker now, we’re trying to get the decoupling done during this lame duck,” Pritzker said.