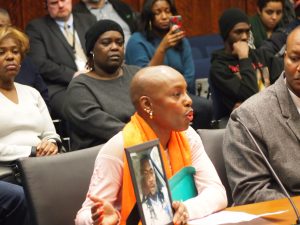 Reginice McBride talks with state lawmakers Dec. 3 as a photo of her son Ronald Terrell James is propped up next to her. James was killed in November 2017, but DNA evidence in the case still have not been analyzed by the Illinois State Police crime lab. (Kevin Beese/Chronicle Media photos)

More than a year after her son’s death, Reginice McBride is still looking for answers.

Information about her son’s killer could be sitting on a mask or a blood-stained T-shirt that is part of a  DNA analysis backlog for murder cases at the Illinois State Police’s Forensic Science laboratories.

“My son became a number,” McBride said. “He’s not a number … No one seems to care about our young men, young black men.”

McBride’s son, Ronald Terrell James, was killed Nov. 5, 2017, when sitting in a vehicle on the 100 block of North Hermitage near the United Center when someone walked up and shot him in the head. A mask found in the area and her son’s blood-stained T-shirt were sent to the crime lab.

She said the lack of urgency in processing DNA evidence in her son’s murder makes her feel like his life served no purpose.

She said families of murder victims would be able to find closure if the DNA evidence was processed and loved ones’ killers brought to justice.

“That’s all I’m asking for, peace, because I have no peace,” McBride said, with a picture of her slain son propped up next to her. “I haven’t had peace in a year. Please give me peace.”

The 752 murder cases waiting for state DNA analysis are just part of the mountain of evidence needing to be probed by the State Police. 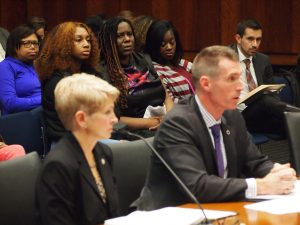 : Illinois State Police Col. Sean Cormier tells lawmakers that there is a 13,390-case backlog at the state’s Forensic Science laboratories, 752 of which are DNA evidence in murder cases. Next to Cormier is State Police Cmdr. Arlene Hall. (Photo by Kevin Beese/Chronicle Media)

“DNA analysis is just one of the many sections that we have,” said Cmdr. Arlene Hall of the Illinois State Police.

Because of lower staffing levels, more cases needing forensic science analysis, rush request protocol, and a state mandate, Cormier said, the backlog of cases at state crime labs has gone from 300 cases in 2009 to more than 13,000 today.

The Sexual Assault Evidence Submission Act, mandated by the General Assembly in 2010, said that all sexual assault evidence in local police departments had to be submitted to the state for crime lab analysis.

“In a very short period of time, over 4,000 cases were submitted to the lab,” Cormier said. “… A lot of resources went into that wave of previously unsubmitted sexual assault cases that came in.”

The state labs have never gotten out from under the backlog the mandate caused.

Cormier said he hoped with the use of robotics and more personnel being brought on board to get the backlog back to 2009 levels within five years.

Hall noted that the hiring process takes close to a year and then, once hired, forensic scientists need two years of training in a subject area before they start handling cases.

“Because of the seriousness of the crimes and intricacies of the analysis, it is extremely important that we do not take any shortcuts to make sure we get proper results,” Cormier said. “The scientific steps cannot be circumvented in any way. It takes a lot more time than we would like.”

Cormier said he realizes that victims and police investigators are waiting on results from the labs. 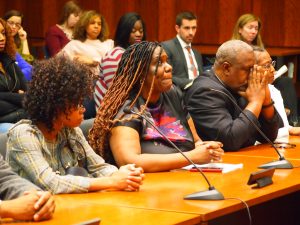 Carmia Tang (center) tells lawmakers of her frustration over DNA evidence in her son’s September 2017 murder still not being processed. “I deserve closure as well as everyone else with a high-profile case or a rich person’s case or a politician’s case,” she said. (Photo by Kevin Beese/Chronicle Media)

“We are striving to make improvements to speed up the process while maintaining standards to support the prosecutions,” he said.

The State Police colonel said he and other leaders are not happy with where evidence-processing is at right now and are driven to improve the procedure.

“The State Police is fully committed to the safety and well-being of everyone in Illinois and upholding everyone’s rights,” Cormier said.

Carmia Tang of The Sisterhood, a group of mothers who lost a child to gun violence, said her efforts to bring the lab backlog to light started when DNA evidence in her son’s September 2017 murder still had not been processed after a year.

Tang called the backlog on DNA analysis in murder cases and the overall backlog at the state crime lab “unacceptable.”

“Chicago has a 17 percent murder solve rate and they blame it on the code of silence (in the black community), but here we are not processing DNA from these cases,” Tang said.

The Chicago resident said she has been told the lack of processing DNA evidence stems from a lack of funding and a lack of personnel.

“I am a mother who lost her child. I deserve closure as well as everyone else with a high-profile case or a rich person’s case or a politician’s case,” she continued. “Just to know that my child was not even worth processing his DNA is an insult to me as a taxpayer.”