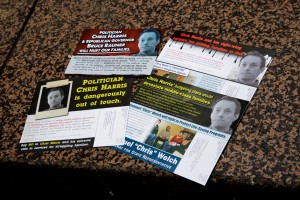 Staggering amounts of money are being spent in the 2016 Illinois primary election cycle.

In spite of the Internet Age, lots of trees are dying to create slick mailers, newspapers and fliers in Democratic primary races.

As many as 10 “opposition mailer” postcards — printed in Springfield — have been sent out in races where incumbent Democrats are facing upstart challengers.

“These pieces are really pounding the negatives and making outright false claims,” said University of Illinois at Chicago Political Science Professor and former Chicago Alderman Dick Simpson. “You don’t know they’re coming and they can’t be answered easily. It takes weeks to prepare a mailing and they’re difficult to refute.”

“Negative campaigning hurts democracy,” Simpson said. “[These mailers] convince voters not to vote in elections at all. They drive down turnout because voters assume all politicians are scum-bags and crooks.”

Harris himself is benefitting from much more sophisticated localized weekly newspapers delivered to the mailboxes of 7th District registered voters by conservative Liberty Principles Super PAC, which editorialize with an anti-Welch slant.

Meanwhile in the 15th district, 13-year incumbent D’Amico has been blanketing the Northwest Side district with $18,000 worth of fliers and postcards accusing his challenger of being a Tea Party member who plans to cut Medicare and Social Security.

“Politics is hyperbole, but a lie is a lie,” said O’Hare Airport noise activist Jac Charlier. Charlier said campaign mailers also accuse him of being part of “Bruce Rauner’s war on women.”

“That one is particularly troubling,” Charlier said. “I am adopted and I come out of foster care. My mother chose to have me. I’m here today because a woman had the choice and the right to make the decision she wanted to.” He says he is campaigning as a “pro-choice Democrat.”

“Since my opponent declared he was running for office his campaign has been completely negative,” D’Amico said. “[Charlier] has been tearing down my family the whole time.”

D’Amico, 53, is the nephew of Ald. Marge Laurino. He’s part of a decades-long dynastic Northwest Side family. His grandfather 39th Ward Ald. Anthony Laurino was indicted in 1994 for ghost-payrolling, but died before he could go to trial. D’Amico’s mother and father both served prison terms for ghost-payrolling.

“Most of the people [Charlier’s] attacking made a mistake and paid the ultimate price,” D’Amico said. “Some of them have passed on. And that was stuff from 20 years ago.”

“I walk every day and every night and my reception at doors is going very, very good,” D’Amico added. “I’m feeling pretty confident we’ll get the vote out and win the elections.”

As well as working as a state rep, D’Amico gets a second salary from the City of Chicago at the Department of Water Management.

In the 40th District, Harish I. Patel, 30, is challenging incumbent Jaime Andrade Jr.

Andrade was appointed two years ago to finish the term of Deb Mell when she took over her father, Dick Mell’s, 33rd Ward alderman post. More than $11,000 worth of negative fliers have blanketed the district paid for by Democratic Majority.

Patel said the mailers were unoriginal and “some of the same images I saw a couple years ago. When you can’t even change the photograph from 2014, you’re not working hard enough.

“Old school politics is done,” Patel added. “Obama taught us that in ’08. They’re stuck in pre-2007. They’re expecting their same 3,000 voters to come out and they are not used to doing a campaign like this.”

Patel said Andrade’s experience as a 17-year Dick Mell protégé was not carrying weight with residents of the district.

“This district has changed so much, they don’t even remember who Mell is,” he said.

Andrade did not respond to calls and emails for comment.

Patel is a community organizer who helped found the Chicago Votes election advocacy group. He also owns a fair-trade clothing import company and worked for immigrant health group Accelerate Change. If elected, Patel would be the first Muslim member of the Illinois Assembly.

Money-wise, Andrade has $201,385 on hand, with donations largely from Michael J. Madigan, Democratic Majority and other PACs. Patel has $46,932, mostly from individual donors.