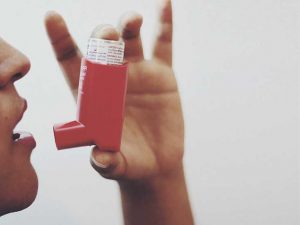 One of the leading causes of school absenteeism, asthma accounts for an estimated 13.8 million missed school days per year, according to the Centers for Disease Control and the Illinois Department of Public Health.

Parents and guardians of school children with mild to severe asthma in Illinois can breathe easier because of new legislation that allows the administration of prescribed emergency inhalers by approved school officials to treat students suffering from attacks.

The bill was sponsored by Illinois State Senator David Koehler (D-Peoria) and supported by a wide bipartisan margin.

“School social workers brought this to me and I was happy to have this legislation,” Koehler told the Chronicle. “It’s kind of a common sense thing, but sometimes you have to put it into legislation to make it happen.”

Illinois becomes just the 10th state with the “common sense” to authorize school nurses or other personnel to administer bronchodilators registered in the name of a school district, public school, charter school or nonpublic school to a student in respiratory distress, according to the American Red Cross.

Similar laws already in existence provide for EpiPens, which are applied to combat severe allergic reactions.

“We have to do more to help kids suffering with asthma in school,” said Koehler. “This legislation will help so many young kids focus more on school and less on their next inevitable asthma attack.”

Around 13.6 percent of children in Illinois are diagnosed with mild to severe asthma, which is over 5 percent higher than the national average of 8.4 percent.

One of the leading causes of school absenteeism, asthma accounts for an estimated 13.8 million missed school days per year, according to the Centers for Disease Control and the Illinois Department of Public Health.

Making the law work in your school

Once the law is put into place allowing for bronchodilators, or” rescue” albuterol inhalers, in schools, it is imperative guidelines and procedures are established to bring the law to life at a local level, according to the American Red Cross.

“We encourage all school districts to implement a model policy to provide students with asthma access to quick-relief medicines during the school day. Having a model policy that allows standing orders can save the life of a child,” the Red Cross recommends.

“Everyone with a diagnosis of asthma should have a bronchodilator or quick-relief medication to reverse quickly the narrowing of the airways that happens during an asthma flare-up. Students often forget to bring their medication or lose it during the school day, and families can have a difficult time providing back-up inhalers for their child to bring to school.”

The Red Cross offers a variety of resources for school boards and administrators, including a model policy for school districts, asthma action plan templates for students, an issue brief and animated videos on barriers and solutions, through their website (see the American Lung Association “Asthma Medicine in Schools” section at www.lung.org/lung-health-and-diseases-lookup/).

While all 50 states and the District of Columbia have laws allowing students to carry and use asthma inhalers at school, the new law puts responsibility on schools to store and dispense the medicines to children under their care.

“To have this life-saving medication immediately available to treat children in distress is so reassuring to the child and his family,” said Becky Zahn, a pediatric nurse at the Tucson Unified School District in Arizona, where a 20 percent decrease in 911 calls and a 40 percent drop in ambulance transports due to asthma attacks occurred within a year of adopting a pilot program for stocking albuterol in schools.

Arizona’s law was written so that only school nurses could administer albuterol to students. However, fewer and fewer cash-strapped school districts in Illinois have nurses, or some districts have nurses that oversee several schools.

The American Lung Association met with Arizona legislators to craft a solution, and a bill was written that allowed doctors to prescribe medication to the school directly and that trained school officials, in addition to nurses, could administer inhalers to students in distress

How the law passed

Arizona’s emergency inhaler law went into effect in 2017 and served a somewhat of a template for Illinois’ bill, which was signed into law by Governor Bruce Rauner on Aug. 3, 2018.

Twenty-five House sponsors are also listed as co-sponsors of the bipartisan bill, which amends the School Code with regard to the self-administration and self-carry of asthma medications.

It provides that schools may “authorize a school nurse or trained personnel to provide undesignated asthma medication to a student for self-administration only or to any personnel authorized under a student’s Individual Health Care Action Plan or asthma action plan.”

Introduced by Koehler in February, the bill soared through both chambers of the 100th General Assembly before landing on the governor’s desk, for his signature.