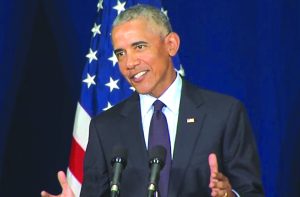 Former President Barack Obama talks to University of Illinois students Friday (Sept. 7) about the economic recovery. “When you hear how great the economy is, remember when this recovery started,” he said. (BlueRoomStream.com)

Despite the daily circus in Washington D.C., former President Barack Obama said he has hope.

Receiving the Paul Douglas Award for Ethics in Government from the University of Illinois on Friday (Sept. 7), Obama said the emergence of more young and female candidates is encouraging.

“I am hopeful,” the former president said during an address at the Urbana campus. “Out of this political darkness, I have seen a great awakening of citizenship all across the country.”

Obama said the young and female candidates he has encountered have their priorities in the right place.

Speaking to a crowd of primarily college students, Obama stressed the importance of young people going to the polls in November’s midterm elections. He noted that in the 2014 midterms, less than 1-in-5 young people voted.

“Is it any wonder that this Congress doesn’t reflect your values and your priorities?” the country’s 44th president asked. “Are you surprised by that?”

He said our democracy depends on voters going to the polls in November. Obama added that in two months, voters will have a chance to “restore some sanity to our politics.”

“This is one of those pivotal moments when every one of us as citizens of the United States needs to determine just who it is that we are, just what it is that we stand for,” Obama said. “… The stakes are higher. The consequences of any of us sitting on the sideline are more dire.”

Spending much of his talk stumping the Democratic agenda, the former president said even individuals who don’t agree with him on policy issues need to come out against President Donald Trump’s rhetoric of hate.

“Even if you don’t agree with me, you should still be concerned with the current course and still want to see a restoration on honesty and decency and lawfulness in our government,” Obama said.

The former president said the current political climate in the country is unhealthy, with hate and fear running the show.

“In a healthy democracy, it doesn’t work. Our antibodies kick in,” Obama said of playing on people’s fears. “The people of goodwill from across the political spectrum call out the bigots and the fear mongers, and work to compromise and get things done, and promote the better agents of our nature.”

He said there is no place for partisan politics in basic American tenets like freedom of the press.

“It shouldn’t be Democratic or Republican that we threaten the freedom of the press because they say things or publish stories we don’t like,” Obama said. “I complain plenty about Fox News, but you never heard me threaten to shut them down or call them ‘enemies of the state.’”

He said the same goes for people of different races or religions.

“It shouldn’t be Democratic or Republican to say ‘We don’t target certain groups of people based on what they look like or how they pray,” he added. “We are Americans. We are supposed to stand up to bullies, not follow them.”

Obama said that fear and hate speech started long before the current administration.

“It did not start with Donald Trump. He is a symptom, not the cause,” the former president said. “He is just capitalizing on resentments that politicians have been fanning for years.”

He said the antidote for a government controlled by a powerful few and being divisive is a government that is organized, energized and inclusive.

“We can’t sit back and wait for a savior … We don’t need a messiah. All we need are decent, honest, hard-working people who are accountable and have America’s best interests at heart,” Obama said.

He lauded the fortitude of young people like the students from Parkland High School in Florida who have continued to demand action in the wake of a mass murder in their school.

“They are not giving up until we have a Congress that sees your life as more important than a campaign check from the (National Rifle Association),” Obama said.

He said by taking a half-hour to vote in the midterms, students can help change the country’s course.

“Thirty minutes of your time, is democracy worth that?” he asked the U of I students.

The former president said he is confident that young voters will be agents of change in this election.

“I believe you will help lead us in the right direction and I will be right there with you every step of the way.” Obama said.

Obama: Call out the bigots and fear mongers —-