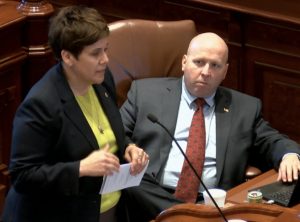 State Sen. Jennifer Bertino-Tarrant (D-Shorewood) speaks in favor of setting the minimum salary for Illinois teachers at $40,000. “These are the people we trust our children to on a day-to-day basis, for eight hours,” Bertino-Tarrant said. Looking on is state Sen. Tom Cullerton (D-Villa Park). (BlueRoomStream.com)

Illinois teachers are another step closer to being assured of at least a $40,000 salary.

The Illinois Senate last week approved a plan that would raise the minimum salary for teachers to $40,000 over the next five school years.

State Sen. Andy Manar (D-Bunker Hill), sponsor of the legislation, said that the move could attract more young people to the teaching profession by sending a message that their work is valued.

“Is a full-time teacher worth $32,000 a year?” Manar asked. “That’s the question the bill proposes, and I believe the answer is an emphatic ‘Yes.’”

Under the measure, the state would update the minimum mandated salary for teachers annually starting with the 2019-20 school year. After the four-year phase-in, subject to review by the General Assembly, the mandated teachers’ minimum salary would be increased according to the Consumer Price Index.

The phase-in calls for a minimum teacher’s salary of:

“There are teachers in the Senate district I represent who live below the federal poverty level today. That’s a fact, and it’s happening all over Illinois,” Manar said. “Yet we continue to ask teachers to do more with less, to cure the ills of society and to give away more of the pensions they’ve earned.” 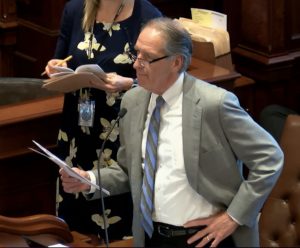 State Sen. Chuck Weaver (R-Peoria) talks against a plan to set a minimum salary of $40,000 for Illinois teachers by the 2022-23 school year. “A lot of our districts, I feel, are doing the very best they can to pay the best they can,” Weaver said. (BlueRoomStream.com)

The Bunker Hill Democrat said if the state doesn’t up the minimum salary for teachers, individuals will turn away from the profession.

“We have chipped away at this over time, and if we don’t guarantee a decent salary for college graduates, we’re not going to get young people to go into this profession in the first place,” Manar said.

No Democrats voted against the bill.

Republicans voting with Democrats on the measure were: Neil Anderson of Andalusia, Dale Fowler of Harrisburg and Sue Rezin of Morris.

The legislation now moves to the Illinois House for consideration. Earlier this session, the House passed a bill that set the state minimum for teachers at $40,000 as of July 1, 2019.

Griffin said the legislation is also a way to help address the state’s teacher shortage.

“This is truly an investment in the future of our state,” she said. “This is a helpful way to try to solve the teacher shortage. It’s not the only solution, but it certainly helps when students are making a decision on their college major. They will know, with certainty, that they can earn a decent living upon college graduation. A $40,000 minimum salary can also attract new people into the profession.”

State Sen. Chuck Weaver (R-Peoria) said the legislation is not the right path to take. He said the state is allocating $350 million more to school districts that will enable them to raise teachers’ salaries.

“We are all concerned about the teacher shortage in the state. I think it is one of the biggest crises we are facing,” Weaver said. “… This bill is going about this in the wrong way by forcing school districts to pay more per district. That’s clearly an area that needs to be focused on by local control. A lot of our districts, I feel, are doing the very best that they can to pay the best they can and for us to add this additional burden to local school districts when they understand their districts better than we do, I think, is totally inappropriate.

“We talk about unfunded mandates. Sometimes they are very minor costs. In this case, it is not a minor cost.”

Sen. Dale Righter (R-Mattoon) said smaller school districts in rural areas simply do not have the money to pay teachers a $40,000 minimum salary.

“If you are looking for the unfunded mandate of unfunded mandates, it is before you right now,” Righter said during Senate discussion of the bill. “The notion is that our small school districts, already struggling to survive who have been given a breath of hope by last year’s funding change, are supposed to take this and be fine and say ‘We believe in the promise of Springfield.’”