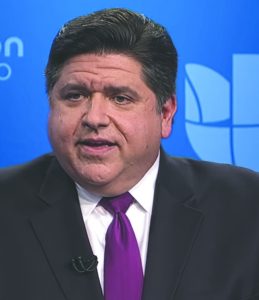 Democratic candidate for governor JB Pritzker criticizes Gov. Bruce Rauner during an Oct. 3 debate for what he called a delayed response to a Willowbrook firm emitting cancer-causing toxins. (Photo ABC 7 from YouTube) 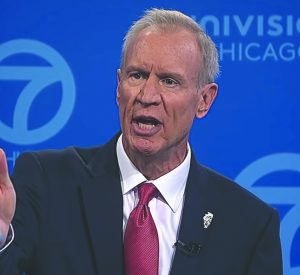 Republican Gov. Bruce Rauner said his Democratic opponent JB Pritzker got caught in “a scheme to defraud taxpayers” when he got property taxes reduced for toilets being removed from a residence. (Photo ABC 7 from YouTube)

Less voices didn’t increase the civility any in the second Illinois gubernatorial debate.

In a head-to-head match-up Oct. 3, Democratic hopeful JB Pritzker and Republican incumbent Bruce Rauner hammered away at each other’s character.

Pritzker said Rauner led a “cover-up” of health issues at the Quincy Veterans Home, has failed Illinois residents and has been unwilling to compromise to get things done over the last four years.

Rauner said Pritzker got caught in “a scheme to defraud taxpayers” when he got property taxes reduced due to pulling toilets out of a home and is the puppet of Illinois House Speaker Michael Madigan.

At one point, during a heated exchange over tax questions, Rauner told Pritzker, “I pay my taxes, you don’t” to which Pritzker responded, “You hid money in the Cayman Islands.”

Pritzker said Rauner provided fatal mismanagement in Quincy and that the governor’s administration is now under criminal investigation. The Democratic challenger said because of a cover-up and delayed action, Rauner failed to protect veterans at the Quincy Home, resulting in 14 deaths and nearly 70 people getting sick.

“Governor Rauner knew about this. His administration knew about it,” Pritzker said. “Days went by without notifying people. People got sick as a result of that, but remember, three years also went by before the governor acted to do something to protect these veterans.”

Rauner chastised Pritzker for politicizing the health challenges of veterans with his accusations.

“Our team did everything they could to protect our veterans at that home, treating the water, following all the experts’ advice,” Rauner said.

Pritzker also criticized the governor for what he called a delayed response to cancer-causing toxins being emitted from Sterigenics, a company in Willowbrook that Rauner owned until 2015.

“You’ve taken weeks and weeks and weeks to do anything about it, but oh, on the eve of a debate, you now have stepped in and said, ‘Oh, maybe they should pause operations,’” Pritzker said.

The governor said his administration has been in close contact with the U.S. Environmental Protection Agency, the company and local officials over the emitting of ethylene oxide from the Willowbrook firm.

“We have been investigating that company. We’ve been conducting air-quality tests for that facility and the dozens of other companies in the state of Illinois that use that chemical,” Rauner said.

The Republican governor focused on the tax and corruption issues that have plagued the state. He said Pritzker is unfit to lead Illinois because he is a tax cheat pushing tax hikes.

“The critical issue here is that Mr. Pritzker is advocating for tax hikes on the people of Illinois, everyone in the state, while he has been cheating on his taxes. It has already been established by the Cook County inspector general (that) he has cheated on his property taxes, and a scheme to defraud, possibly criminal behavior,” Rauner said. “He has also inherited billions of dollars, kept it offshore so he did not pay his income taxes in America or Illinois. He has cheated on his taxes and yet he wants to raise the taxes on the working people of the state. He represents everything that is broken.”

Pritzker said the tax issue stems from a renovation project that was halted because it was unclear if the home was going to be sold or put up for rent, and when the project was restarted the taxes were paid.

“This is how Governor Rauner distracts from his own record,” Pritzker said. “He took 22 property tax reassessments and illegally took three homestead exemptions, and then he proposed raising property taxes by a billion dollars.”

It was a head-to-head debate because the televising network, ABC 7 Chicago, instituted requirements saying that candidates in attendance had to have at least 10 percent support in a statewide, nonpartisan poll during the past 30 days.

Conservative Party candidate Sam McCann ripped the decision that left him and Libertarian candidate Kash Jackson on the sidelines.

“It’s a shame that ABC 7 decided to exclude 50 percent of the candidates running for governor,” McCann said in a Facebook video. “After working diligently for the last two weeks to convince ABC 7 to allow all four candidates on the debate stage, I have nothing left to say to them.”

On Thursday, Jackson tweeted: “My Twitter account regularly is #shadowbanned while at the same time I am shunned from the debates and stiffed by almost all of the local media. I think it is safe to say the establishment is afraid of me.”

Both McCann and Jackson appeared in the Sept. 20 debate aired on NBC 5 Chicago.

Join us on LinkedIn