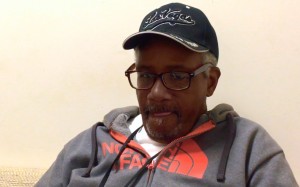 Lester Davidson, 69, of Chicago, had already served six terms in a state penitentiary — five for drug possession and one for burglary — in April, 2014, when he was arrested with several bags of cocaine. Davidson was offered a new type of probation program through the Access to Community Treatment (ACT) court in Cook County.

“Judge [Mary] Roberts told me ‘I believe in second chances,’” Davidson said. The voluntary program works intensely with about 200 nonviolent chronic offenders a year to break the behavioral cycles that lead to repeat prison terms.

ACT court is one of more than 100 “problem-solving courts” or “therapeutic courts” in the state of Illinois. These include drug courts, mental health courts, DUI courts and veterans’ courts.

“We are trying to stop the revolving door,” said Michael Tardy, executive director of the Administrative Office of the Illinois Courts. “We’ve asked why isn’t our system effective with these chronic, repeat offenses?”

To make sure problem-solving courts in all 24 Illinois judicial circuits are consistent and aware of best practices, the Illinois State Supreme Court has come up with a list of standards and a certification process.

As prison costs rise to between $30,000 and $45,000 per year to incarcerate nonviolent offenders, Illinois therapeutic courtrooms have become “off ramps” for offenders whose problems are not solved by incarceration in the penal system, said Ali Abid of the Chicago Appleseed Fund for Justice.

“These courts work best for people who have a high risk to offend again and have high needs — things that can be changed like housing, drug abuse or mental health treatment,” Abid said. For drug offenders, “sitting in jail for 25 days waiting for trial is counterproductive, because they just become habituated to a new environment,” Abid said. Specialty drug courts divert nonviolent drug offenders into a new intensive program right away, which, data shows, breaks the cycle of recidivism, Abid said.

Problem-solving courts, or even single-specialty dockets, bring the “right services to the right people,” Tardy said. “These courts take a problem-solving approach rather than the adversarial approach,” he said.

In Cook County’s ACT court, Davidson worked with a team of probation officers, case managers, public defenders, assistant-states attorneys and addiction treatment providers. He signed a contract with the court that involved mandatory visits to the courtroom every week, drug tests several times a week at random and scheduled times. He also attended group 12-step meetings at Chicago’s Haymarket House and slowly began to envision a life free of addiction.

“If you let it, the program enables you to become a whole different person,” said Davidson, who was homeless.

“I wasn’t living before, I was existing,” Davidson said. “I would pay someone $10 to sleep in their basement on some bedbug-ridden recliner.”

“Now I have keys. I have a lease. I pay my bills on time,” Davidson said. He said he has been sober 17 months and now volunteers at 12-step meetings. Davidson serves as an ACT Court Ambassador, talking to people who are just beginning the program.

“I don’t mind sharing my lifelong experiences with other people,” he said.

On Fridays at the Waukegan courthouse, a special courtroom is reserved for veterans who have been arrested, both for felonies and misdemeanors. 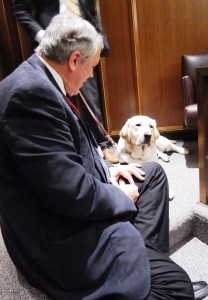 “When a defendant has been in the military, and they’re standing in front of you as judge, they’ll always come to attention, then go to parade rest,” said former Lake County Chief Judge John Phillips, a U.S. Air Force veteran.

Phillips is among the judges who drafted the new problem-solving court state standards. He helped develop the Lake County veterans’ court to hook arrestees up with the resources of the nearby Veterans Administration hospital Captain James A. Lovell Federal Health Care Center.

Mitch, the “wonderful big yellow lab” therapy dog also visits the courtroom, Phillips said. “If someone is having emotional problems in court, that dog is there in a heartbeat, even standing right next to the judge,” Phillips said.

Veterans are asked if they want to participate soon after they are arrested.

“We work hard to identify veterans right away, at the jail, at bond court,” said Phillips. “They can be very reluctant to identify themselves as veterans.”

Graduates of the VTAC program can have felonies dismissed so they don’t have a criminal conviction on their record. Unlike in drug court, Lake County’s VTAC court has two tracks: one for high-risk/high-need offenders and another for those who might be arrested for misdemeanors or DUI. Those with less-serious offenses are offered resources from the VA hospital, to give them support.

The veterans’ court also admits offenders with some violent crimes.

“Domestic violence is often a signal that there are PTSD (post-traumatic stress disorder) and addiction issues; that’s how those issues are caught,” Phillips said. “We’re also not shy about weapons offenses.”

Phillips said victims must consent for the participant to enter the voluntary probation program.

About 30 veterans a year take part in the veterans’ court. The most high-risk veterans visit court once a week if they have a criminal history, addictions or are homeless.

“One of the keys to success is the mentoring program,” Phillips said. About 15 mentors are matched by military branch, although not necessarily the same era, Phillips said.

“The vets get to talk to someone who has walked the same ground and felt the same things they did, “Phillips said.

Since the veteran court started in 2011, only 14 percent of graduates from the program have been re-arrested within two years.

“Now we have graduates of the program coming back and wanting to volunteer as mentors,” Phillips said. 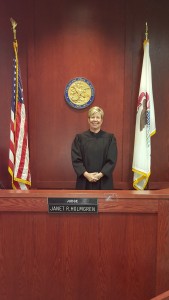 When a person with severe mental illness is arrested, Holmgren’s team jumps into place.

“I have a specialty court that is precisely designed to make an immediate referral to see a psychiatrist and let [the defendant] stabilize on medication,” she said. “Then there’s a team to wrap around to make the transition back into community, including home visits, and helping them with doctors and other appointments.”

“It’s actually very uplifting to offer help to have that vehicle,” she said.

The probation period for TIP court averages about 30 months, Holmgren said. About 80 people are in the TIP court system at any one time, she said.

Standards throughout the state

Appellate Judge Kathryn E. Zenoff, also of Rockford, chaired the committee that wrote the state standards. More than 30 drafts were compiled, using best practices for problem-solving courts throughout the nation.

Zenoff said the certification process would help problem-solving courts in all 102 Illinois counties get access to state and federal grants.

Gov. Bruce Rauner has set a goal of a 25 percent reduction in prison population throughout Illinois. In Springfield, Jan. 14 at a meeting of the Illinois State Commission on Criminal Justice and Sentencing Reform, Rauner told reporters:

“I believe we can save taxpayer money, and most importantly, I believe we can help those who made mistakes lead productive lives and come back as productive, full citizens who are enhancing the quality of life for everyone in all of our communities around Illinois.”

Holmgren said she thinks problem-solving courts will be recognized as part of the solution. But the state budget impasse has restricted payments to the hospitals and therapists working with the courts, she said.

Funds are frozen in 2016 so far for one grant organization, Adult Redeploy Illinois, which has funded problem-solving courts for years.

“Frankly it’s been a bumpy road,” said Holmgren, “We are trying to line [participants] up with treatment based on their insurance, and sometimes our treatment providers aren’t being paid by the state.”